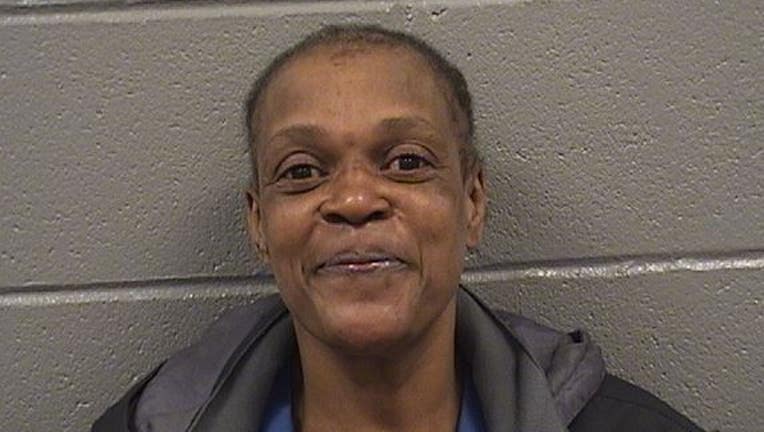 CHICAGO - Less than two years after being paroled in the fatal stabbing of her then-boyfriend, a 55-year-old woman has been accused of stabbing another man in the neck after they broke up earlier this month.

Veronica Wilson, from the South Austin neighborhood, was arrested Friday and charged with felony counts of attempted murder and domestic battery in the March 5 attack in West Garfield Park.

During Wilson’s initial court hearing Sunday, Cook County prosecutor Tom Lahood explained that she and the 43-year-old victim ended their "intimate relationship" last month but continued dating until shortly before the stabbing.

Lahood said after breaking up, the two walked to a park and hung out for a few hours. As they stood in an alley in the 4700 block of West Erie, near Smith Park, Wilson allegedly asked her ex-boyfriend to walk her to the corner and he declined.

During a brief altercation, Wilson lunged at Smith and stabbed him above his collarbone, Lahood said. As people gathered to help, the man’s brother rushed to his side and put a towel around his neck.

The victim was taken to Mount Sinai Hospital and was later transferred to Northwestern Memorial Hospital, where he underwent the first of two planned surgeries, Lahood said. In addition to the stab wound to his neck, he lost feeling in his left arm.

After Wilson was taken into custody at her home, Lahood said her ex-boyfriend and his brother identified her as the assailant from her booking photo.

The circumstances of the stabbing are strikingly similar to the November 2014 slaying of her then-boyfriend, 46-year-old Andre Brown.

When Brown accused Wilson of cheating during an argument, she left their shared South Side apartment and he followed behind, Lahood said. As Brown tried to coax her into returning home, Wilson walked with him for a few blocks before stabbing him three times in the 3000 block of East Cheltenham Place.

Wilson then headed home but later returned to the scene of the stabbing and rifled through Brown’s pockets without rendering aid, Lahood said.

She was found guilty of second-degree murder, sentenced to 12 years in prison and ultimately paroled in August 2020, Lahood said. She also has multiple drug convictions.

Wilson’s public defender, Samantha Petitti, said Wilson lives with her daughter and takes care of her four grandchildren. Petitti noted that Wilson is unemployed and has no money to post bond, urging Judge Mary Marubio to reject Lahood’s request to deny bail.

But Marubio noted that Wilson was on parole when she allegedly carried out the "unprovoked attack" earlier this month, indicating there were no conditions that could keep her in compliance with the terms of her release.

Marubio ordered Wilson held without bail. Her next court date was set for March 28.