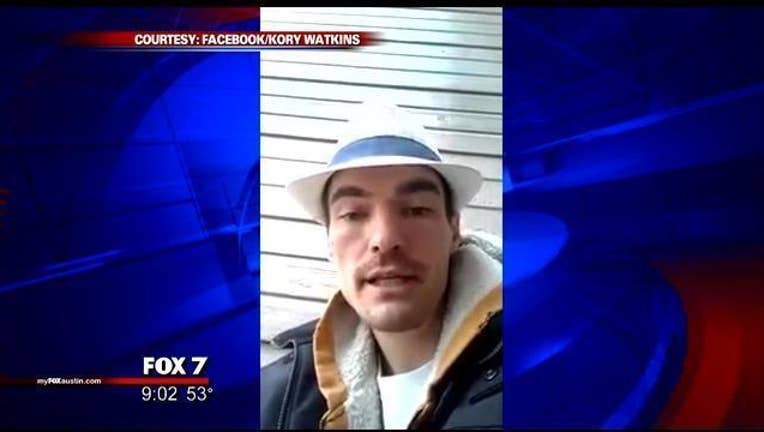 Kory Watkins with Open Carry Tarrant County recently made headlines when he put his foot in the door of a State Rep's office who was asking him to leave.

The House voted the next day to let lawmakers put in panic buttons if they wanted.

Now he's posted a video to Facebook that he quickly removed.

"We should be demanding these people give us our rights back...or it's punishable by death. Treason. Do you understand how serious this is? Texas? We need to start sticking more than foots in doors...ok?" Kory says in the video.

Watkins quickly took down the video and posted on his Facebook that he feared people would intentionally misinterpret what he was saying.

Watkins wrote "My intent was to show that our founders took treason very seriously. Our elected officials have taken an oath to defend the constitution. Dereliction of that oath is an equally serious matter. I was certainly not threatening anyone," Watkins said.

His attorney Warren Norred came to his defense.

"In all the time that I've talked to him and I've talked to him when he's pretty excited...I've never seen Kory act as though he would be violent in any way...not ever. He speaks strongly, he's passionate about what he wants to do," Norred said.

The video was the talk of the Todd and Don Show on KLBJ.

"I mean there's a lot of people that are doing it the right way but in that group there's some people that scare me. I mean they really do," one caller said.

"I think he's just passionate...and if he was my neighbor I would be fine with it," another caller said.

"We're concerned for the safety of the lawmakers and for us out around town with our kids...if these laws pass," said the group's Claire Lawson.

C.J. Grisham is with Open Carry Texas. He's fighting at the Capitol for Constitutional Carry but he says he's tired of answering for Kory's antics.

"It's very frustrating because every time we seem to be building momentum, along comes Kory saying something that completely destroys the respect that these bills have," he said.

Terry Holcomb with Texas Carry is fighting for licensed open carry. He knows Kory and feels his words can only mean one thing.

"It wasn't symbolic. He basically said he wanted to do something more than put his foot in the door..and he's taking it to the next level. Completely unacceptable language and I believe he meant exactly what he said," Holcomb said.

"You know I don't have a doctorate in the English language but when you say that not voting for a bill is treason punishable by death, that doesn't mean that we're going to give you a lollipop. I don't know how you can interpret that any other way than a veiled threat," Grisham said.

We did reach out to Kory today for an interview but he referred us to the statement he put on his Facebook page:

"This morning I removed a video from my Facebook because I thought there were those that would intentionally misinterpret my words. In this video I referred to treason, and the fact that the penalty for treason was death. My intent was to show that our founders took treason very seriously. Our elected officials have taken an oath to defend the constitution. Dereliction of that oath is an equally serious matter. I was certainly not threatening anyone. I love the constitution dearly, and the constitution is very clear on the process for convicting someone for treason, I was obviously not calling for such a process, nor was I threatening anyone. I simply wished to point out the seriousness of the constitution.

Let me make it clear and unequivocal: I was not talking about hurting legislators, or anyone else. I am an advocate of peaceful non-cooperation. When I speak of "stepping it up a notch" mean within the boundaries of "peaceful non-cooperation". Instead of just a foot in the door. perhaps we need "sit ins" chanting "hell no we won't go".

We at Open Carry Tarrant County denounce in the strongest terms harming or threatening to harm persons or property as a strategy to bring about open carry in Texas. Anyone who has done so, has not done so on behalf of our organization. We at Open Carry Tarrant County proudly follow in the tradition of Ghandi, Martin Luther King and Rosa Parks in in using peaceful noncooperation as a means to demand our rights."