LOS ANGELES - The cast of “Parks and Recreation” gathered together — virtually — for a socially distant reunion special on Thursday and sang a moving tribute to Li’l Sebastian, Pawnee’s beloved mini horse.

Amid the ongoing coronavirus pandemic, NBC’s half-hour special was created to raise money for Feeding America — a nonprofit with a nationwide network of more than 200 food banks feeding millions of people across the country. 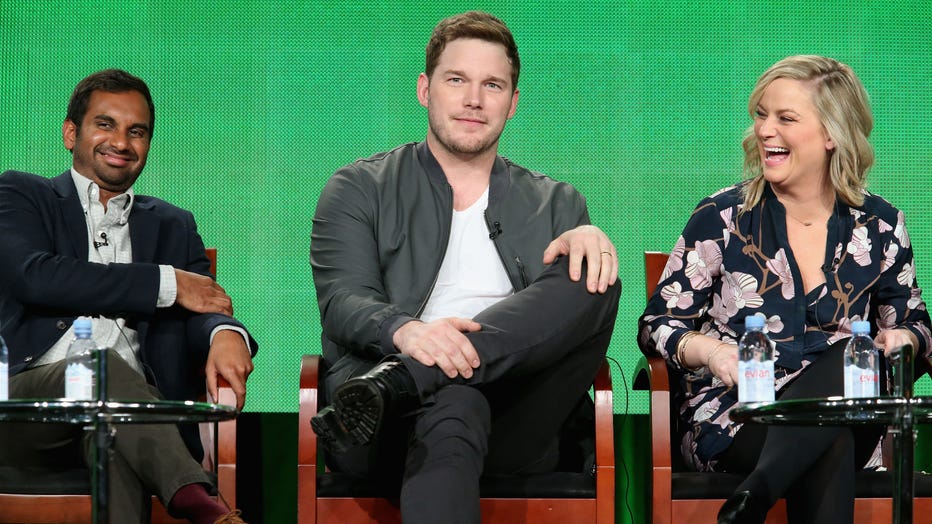 (L-R) Actors Aziz Ansari, Chris Pratt and Amy Poehler speak onstage during the “Parks and Recreation” panel discussion at the NBC/Universal portion of the 2015 Winter TCA Tour at the Langham Hotel on Jan. 16, 2015 in Pasadena, California. (Photo by F

The special featured the show’s core cast, including Leslie Knope (Amy Poehler) grappling with the country’s COVID-19 crisis while trying to do media outreach and staying connected with her friends in quarantine.

When Poehler’s character lets on that she’s struggling with everything going on and needs a little cheering up, Ron Swanson (Nick Offerman) recruits her friends to sing the classic Li’l Sebastian tribute song, “5,000 Candles In The Wind.”

“Leslie, you said you needed something to lift your spirits, so Andrew, take it away,” Swanson says from his cabin.

Andy Dwyer (Chris Pratt) then appears on screen, sporting a Li’l Sebastian shirt and playing the show’s legendary tribute on his guitar. The rest of the cast then join in, harmonizing the song together on screen — including Aubrey Plaza, Rob Lowe, Rashida Jones, Aziz Ansari, Adam Scott, Jim O’Heir and Retta.

Contributions from the reunion special will go to Feeding America’s COVID-19 Response Fund, which is helping food banks serve vulnerable community members, NBC said. Up to $500,000 in donations made through May 21 will be matched with contributions from NBC Universal, the sitcom’s cast, writers and producers, and State Farm and Subaru of America.

“Like a lot of other people, we were looking for ways to help and felt that bringing these characters back for a night could raise some money,” said executive producer Michael Schur. “I sent a hopeful email to the cast and they all got back to me within 45 minutes.”

“Parks and Recreation,” about an Indiana’s town idiosyncratic public officials, ended its seven-season run in 2015.