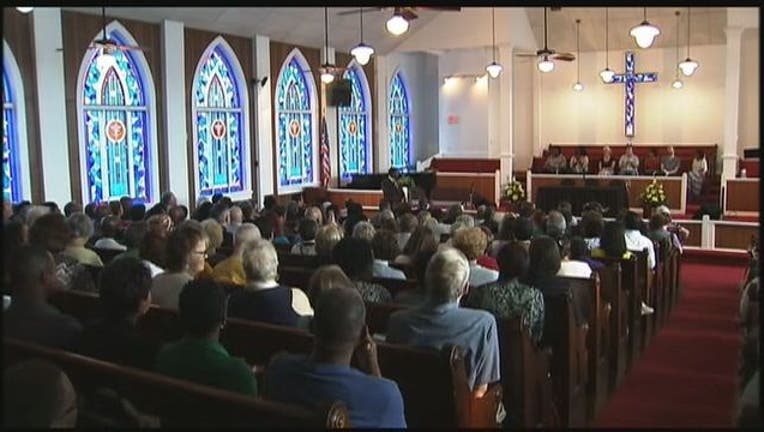 HOUSTON (AP) - On one of his recent visits to the home of an immigrant family, Julio Barquero asked everyone sitting in the living room to stand and join hands. They formed a circle, closed their eyes, and prayed.

"Help us in the name of God," Barquero, a lay minister with the Christian Church (Disciples of Christ), said in Spanish. "And help the Latino community and the state of Texas."

Barquero is among pastors serving Texas' estimated 1.5 million people living in the U.S. illegally who are offering new programs and, in some cases, visiting families fearful of crackdowns on immigration. A new Texas law targeting so-called sanctuary cities comes just as immigration arrests have gone up dramatically in the state's biggest cities.

In Texas and nationally, some parishes and communities with large populations of immigrants in the U.S. illegally have reported slightly lower attendance on Sundays, or significant drop-offs in attendance at classes or programs outside of prayer services. Others say more immigrants without legal permission are coming to church in search of reassurance and help.

"I've visited people in their own families in their apartments, taking communion to them, almost treating them as they are ill or homebound," said Sam Dunning, director of the Office of Justice and Peace for the Roman Catholic Archdiocese serving Houston.

Republican Gov. Greg Abbott in May signed an anti-sanctuary cities law that would allow local police to ask people about their immigration status during routine stops, though departments can declare a "place of worship" off-limits for cooperation with federal authorities. The law would also force police chiefs and sheriffs to honor all federal "detainer" requests to hold criminal suspects for possible deportation, with the threat of jail time for officials who don't comply. Several Texas cities and civil rights groups have gone to court to try to stop the law, which is set to take effect in September.

Texas is both the nation's largest conservative state, with leaders who have long pushed for tougher immigration laws, and one of the nation's biggest recipients of refugees and other immigrants, with or without legal status. It is also a deeply religious state, with thousands of churches, mosques and temples serving people across race and political lines.

Under Abbott, Texas has lined up behind the immigration priorities of the Trump administration, which has increased immigration-related arrests and promised to try to speed up deportations. Houston and Dallas were in the top three cities for arrests by U.S. Immigration and Customs Enforcement from January to April. Reports of raids and stakeouts, including at least one near a church shelter in Virginia, have created more fear in immigrant communities. A handful of churches are housing families to shield them from deportation.

"The law makes clear that no one attending Sunday Mass has anything to fear," Wittman said.

The nonprofit Catholic Legal Immigration Network is encouraging local affiliates to identify people who could apply for a visa or legal protection from deportation. The group estimates as many as 1.6 million of the 11 million people living in the U.S. illegally could quality for some form of legal status.

World Relief, which works with evangelical churches nationally, said about 35 percent of regional leaders in a recent survey said pastors they supervise were concerned about declines in church attendance. A spokesman for the group, Matthew Soerens, said local leaders were trying to prepare members "for any circumstance," while also pointing out that most immigrants are unlikely to face deportation.

Barquero and his wife, Lucy, conduct weekly meetings by telephone with people who are afraid or unable to go to church. They also make occasional home visits around Houston.

"My message is to continue living your life normally," he said in an interview. "Participate in defending your rights, yes, but don't take unnecessary risks."

Guillermo Peña, a pastor at Living Word, a Houston church that offers services in English and Spanish, said the majority of the members of the Spanish-speaking congregation are in the U.S. illegally.

Peña and his wife, fellow pastor Luz Maria Coto, spent a recent weeknight sitting with several church members who said they felt more threatened and concerned about their families' well-being. A carpenter from central Mexico said people shouted profanities at him recently at a supermarket. A construction worker from El Salvador said he was afraid he would be separated from his wife and two children, all U.S. citizens, and sent back to a neighborhood controlled by gangs that dictate what color clothing residents can wear and what hours they can leave their homes.

Peña says he worries other churches and politicians aren't fully aware or don't care about the plight of immigrants without documentation.

"The migrants are practically alone inside a white structure," Peña said. "At this point, I believe the church needs to understand that we are a church of migrants, so we can better understand the problem."