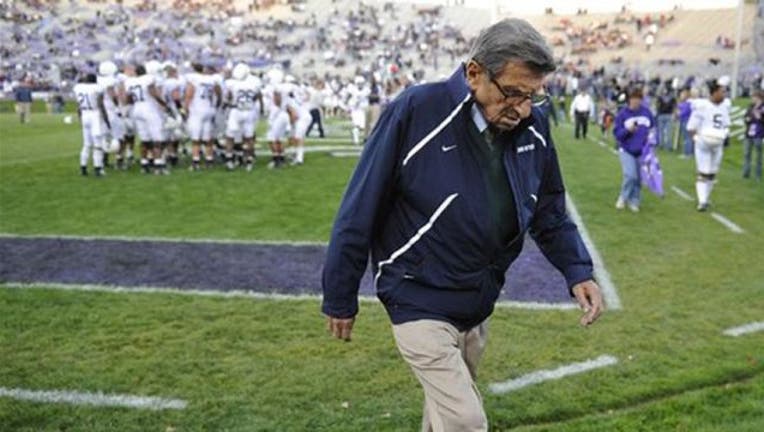 STATE COLLEGE, Pennsylvania - Penn State's football team is getting back 112 wins wiped out during the Jerry Sandusky child molestation scandal and the late Joe Paterno has been restored as the winningest coach in major college football history.

The NCAA announced the new settlement with the school weeks before a scheduled trial on the legality of the 2012 consent decree it will replace.

The new deal also directs a $60 million fine to address child abuse be spent within Pennsylvania and resolves that lawsuit.

The NCAA board of governors approved the settlement, said association spokesman Bob Williams. The Penn State board approved it Friday afternoon.

The announcement follows the NCAA's decision last year to reinstate the school's full complement of football scholarships and let Penn State participate in post-season play, and comes just days after a federal judge declined to rule on the consent decree's constitutionality.

The NCAA said continuing the litigation would only delay the distribution of funds to sex abuse survivors.

"While others will focus on the return of wins, our top priority is on protecting, educating and nurturing young people," said Harris Pastides, University of South Carolina president and member of the NCAA board.

The consent decree sprung from the scandal that erupted when Sandusky, a retired football assistant coach, was accused of sexually abusing boys, some of them on Penn State's campus.

It had eliminated all wins from 1998 - when police investigated a mother's complaint that Sandusky had showered with her son - through 2011, Paterno's final season as head coach after six decades with the team and the year Sandusky was charged.

In September, the NCAA announced it was ending the school's ban on post-season play and restored its full complement of football scholarships earlier than scheduled.

The consent decree had also called for Penn State to provide $60 million to fight child abuse and combat its effects. The lawsuit scheduled for trial next month began as an effort by two state officials to enforce a state law that required the money to remain in Pennsylvania.

Under the settlement, the money will remain in Pennsylvania.

As part of the new proposal, Penn State acknowledges the NCAA acted in good faith.

"We acted in good faith in addressing the failures and subsequent improvements on Penn State's campus," said Kirk Schulz, member of the NCAA board of governors. "We must acknowledge the continued progress of the university while also maintaining our commitment to supporting the survivors of child sexual abuse."

The 2012 consent decree was signed by Penn State's then-president, Rodney Erickson, a month after a jury convicted Sandusky and shortly after former FBI director Louis Freeh released the scathing results of a university-commissioned investigation into the Sandusky matter.

Its unprecedented penalties drew heated and sustained opposition by Penn State alumni and fans who argued the Freeh report was factually incorrect, defended Paterno's handling of the Sandusky scandal, noted it punished people who had nothing to do with Sandusky and said that the school's athletics program had been considered a national model.

In recent months, emails and other documents have been attached to court filings by the NCAA and the plaintiffs, state Senate Majority Leader Jake Corman and state Treasurer Rob McCord.

In one, an NCAA official described its pursuit of the penalties as "a bluff" and said asserting jurisdiction would be "a stretch." Other records documented that Penn State narrowly avoided a multi-year "death penalty" which would have suspended the college football powerhouse from playing at all.

Corman signed off on the proposal, the senator said at a news conference in Harrisburg.

"The fact of the matter was, an evil predator operated in our community for years and everyone missed it," Corman said. "The NCAA has surrendered. The agreement we reached represents a complete victory for the issue at hand."

McCord supports the agreement in principle, but he "intends to carry out a careful review of the details and language before he signs off," said his spokesman Gary Tuma.

Sandusky was convicted in 2012 of 45 counts and he is now serving a 30- to 60-year prison sentence. He maintains his innocence.

Paterno's surviving family members and others had been pursuing another lawsuit over the consent decree. That lawsuit was narrowed by the judge so that it now includes the family, former assistant coaches Jay Paterno and Bill Kenney, and former trustee Al Clemens. Former players, faculty and trustees were removed as plaintiffs.

In a statement, Paterno's family called the announcement of a potential settlement "a great victory for everyone who has fought for the truth in the Sandusky tragedy."

They said: "This case should always have been about the pursuit of the truth, not the unjust vilification of the culture of a great institution and the scapegoating of coaches, players and administrators who were never given a chance to defend themselves."

Michael Boni, a lawyer for one of the victims who testified at Sandusky's trial, said he favored restoring Penn State's scholarships and bowl eligibility last fall, but does not believe Paterno's victories should be reinstated.

"To completely restore, in a sense, Joe Paterno's heretofore pristine reputation, I regret that," Boni said. "He did a world of good, but he made a huge, huge error in judgment in helping cover up Sandusky's pedophilia, and even posthumously I think that has to be recognized."

Boni praised Penn State in its dealings with the victims but said he sensed a "shift in the tide" later.

"There was a movement away from what I thought was a genuine mea culpa on the part of Penn State, having accepted the NCAA sanctions, and one toward, 'Why did we cave so easily?' That was disappointing," he said.

Mike Guman, a Penn State running back from 1976 to 1979, called the deal "a step in the right direction" to vindicating Paterno. The late coach "was a great leader, a great coach and a great man," Guman said. "He needs to be looked upon in that light."

The deal infuriated some Penn State alumni who have long contended the NCAA had no authority to punish Penn State over the Sandusky scandal, and who were in favor of a trial.