Pennsylvania is a key swing state ahead of 2020 election, experts say

Experts say the Keystone State continues to change and has increasingly become known as a key battleground state ahead of the 2020 presidential election.

LOS ANGELES - President Donald Trump won Pennsylvania by a narrow margin in 2016. It’s considered a complicated state to categorize due to its historical swing status, and “right now, Pennsylvania looks like the single most important state of the 2020 election,” polling analysis website FiveThirtyEight said.

According to FiveThirtyEight’s presidential forecast, Pennsylvania has a 31 percent chance of being the tipping-point state, which is what happens when you give one of the most evenly divided states in the union 20 electoral votes.

Experts say the Keystone State continues to change and has increasingly become known as a key battleground state ahead of the 2020 presidential election.

Pennsylvania’s swing-state status, along with its ability to award 20 electoral votes of the 270 needed to win the presidency has brought the state a great deal attention during 2020’s election cycle.

But, for a period of time not too long ago, Pennsylvania didn’t have much swing.

Pennsylvania, where the U.S. Constitution was written, was the second state admitted to the Union in 1787.

The Republican Party dominated voting in Pennsylvania in the 1980s with its Electoral College votes going to Ronald Reagan for two terms and George H.W. Bush for one term.

After that, the state shifted to blue and stayed that way for two decades.

Eric Plutzer, a political science professor at Penn State, discusses Pennsylvania's political history and how the state is changing ahead of the 2020 election.

While margins were consistently narrow, the Keystone State exclusively chose Democrats in six straight contests, from 1992 to 2012.

But, once again, that streak changed in 2016, when Donald Trump won the state of Pennsylvania, a pivotal state in the Electoral College, helping to secure Trump’s victory as president of the United States.

While Trump only won the state by 0.7%, the win made Pennsylvania one of three “blue wall” states previously considered a Democratic stronghold and where 2016 state polls underestimated Republican support. 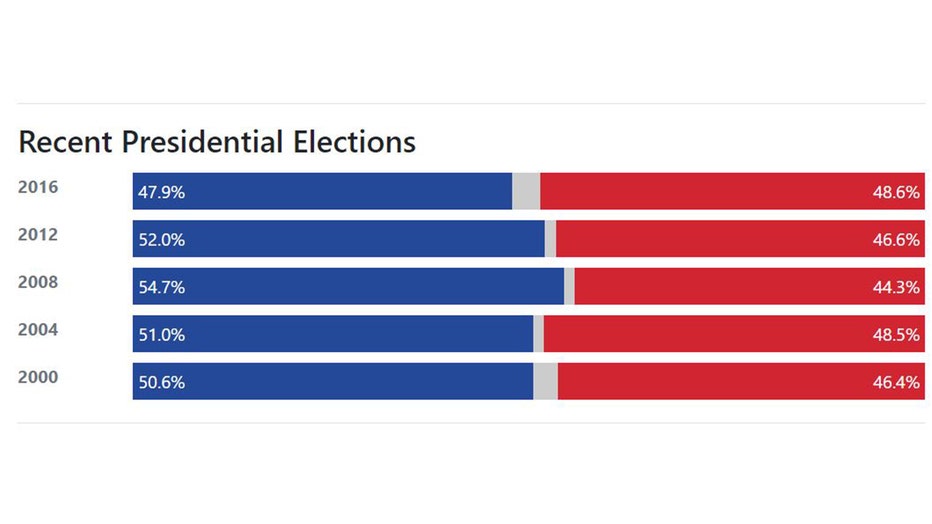 Pennsylvania’s 2020 presidential election polling shows that Democratic presidential candidate Joe Biden is leading in the state in the run-up to the election, and by fairly large margins in some polls. 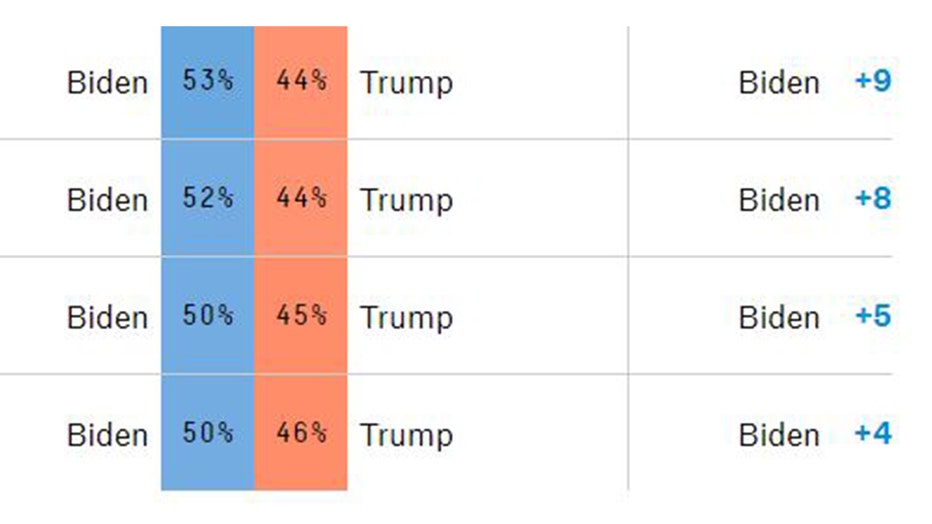 But is something steering a potential political shift?

Not necessarily, or at least not remarkably.

Demographics have changed, but Eric Plutzer, a political science professor at Penn State, says they have not changed significantly.

“People are looking at demographics and probably over-estimating how important those are,” Plutzer said. “The demographics haven’t changed, but Pennsylvanians have switched back and forth supporting different parties over the last recent years.”

The older-aged population is slightly higher in Pennsylvania than the national average, but it’s certainly not a retirement destination.

So, if demographics haven’t changed substantially, what about population numbers?

Pennsylvania has shown only a slight increase in population, climbing 0.8% between 2010 and 2019, according to Census.gov. That growth rate can be compared to Arizona, which has seen rapid growth, increasing 13.9% between April 2010 and July 2019. That’s an increase of nearly 1 million people in the state.

So, if demographics and population aren’t steering the ship, what is?

Plutzer says the pandemic may not have as heavy of an influence on voters in Pennsylvania as people might think.

In many of the areas that voted heavily for Trump in 2016, such as rural areas where there is less potential for transmission of COVID-19, there have been fewer cases of the coronavirus.

"They may look at the lockdowns and think it’s an overreaction," Plutzer said. "I think they’re likely to still be with him."

If demographics and population and the current pandemic aren’t shaping the votes this time around, what is likely to shape the results in November?

According to the Center for American Progress, the turnout rate among White, non-college educated voters increased from 53.0 percent in 2012 to 57.4 percent in 2016 — and they went from voting for Mitt Romney by 20.3 points to voting for Trump by 28.6 points. Meanwhile, the turnout rate for White, college educated voters also increased from 77.6% in 2012 to 80.6% in 2016. Voter turnout for Latinos and Asians also significantly increased, while African American voter turnout slightly decreased. 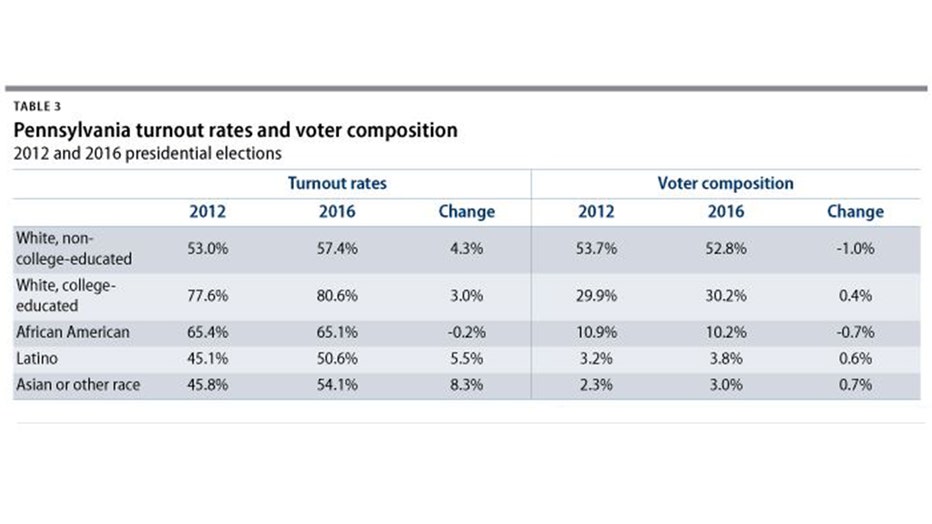 Turnout rates in 2012 and 2016 elections (Center for American Progress)

Seniors typically have a high turnout rate in Pennsylvania elections, so Plutzer said the efficiency of the implementation of vote by mail is going to be very critical to how the vote turns out.

According to the Pennsylvania Department of State, 47.1% of registered voters are Democrats, 38.6% are registered as Republicans, and 14.3% are Other.

This would lead to the safe assumption that Democrats could win if they showed up to vote and if undecided voters chose to vote blue.

But, it not only comes down to how many people turn out.

Where this voting happens is critically important.Pittsburgh in the west and Philadelphia in the east act like other major cities — they vote primarily Democratic. Pennsylvania would need to see more votes come from the major cities and suburbs in order to turn the state blue again.

“That’s where all the votes are. There are millions of votes in the Philadelphia and Pittsburgh metropolitan areas. It’s impossible to win Pennsylvania without picking up a substantial number of those votes,” Plutzer said.

Plutzer attributed Trump’s win in 2016 to his ability to turn out new voters. Support in rural areas overcame Democrats’ advantage in cities like Philadelphia.

“He was able to create a lot of new energy and win the state by a little under 1%,” Plutzer said. But, those who originally voted for Trump may still be open to an alternative.

Trump only eked out a small win in 2016, and it’s likely to be a close call again.

Plutzer said Trump will need to recreate the same coalition that brought him to victory in 2016 if he wants to keep Pennsylvania as a red state. “He needs to create the same kind of enthusiasm that led a lot of occasional voters to turn out for him in 2016,” Plutzer said.

As for Joe Biden?

Hillary Clinton only lost the state by 44,000 votes, so it has been very close in Pennsylvania in the past. “Joe Biden can’t afford to lose anyone that voted for Hillary Clinton, that’s for sure,” Plutzer said. “He needs to generate excitement among younger voters, who have not yet developed a habit of voting and often stay home.”

Plutzer said Biden will need to give young voters and minority voters a reason to show up at the polls this election season, through topics that engage the young population such as college debt, affordable health care, gun violence, immigration and climate change.

Pennsylvanians are open to persuasion

“I think Pennsylvanians are not like robots who just vote for the same party and person every time,” Plutzer said.

Plutzer added that Pennsylvanians tend to not be anti-government, they just want a government that is effective.

“It’s definitely going to be close, and I think Pennsylvanians are looking for the candidate who can make government function better for them, not for a candidate who just wants to shrink government,” Plutzer said.

Voters in Pennsylvania may look critically at the way that Trump managed the coronavirus pandemic, Plutzer said.

“I think it’s definitely going to be a tough sell for the president to make the argument that he’s managed this in the best possible way. And, so I think many of those voters are going to be open to an alternative,” Plutzer said.

Will Pennsylvania be red or blue in the 2020 presidential election?

Plutzer believes that Pennsylvania will continue to bounce around and will never return to blue state status on a permanent basis. It will once again depend on how many voters turn out at the polls.

“I don’t think Pennsylvania is likely to go heavily blue and stay that way for a long period of time,” Plutzer said.