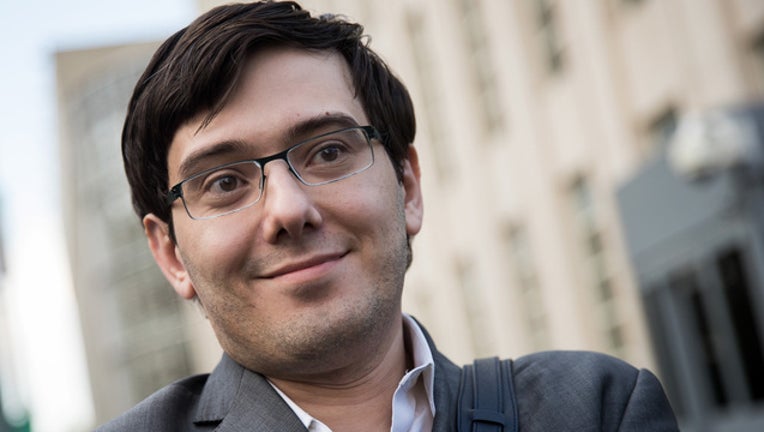 NEW YORK - (AP) -- Martin Shkreli, the eccentric former pharmaceutical CEO notorious for a price-gouging scandal and for his snide "Pharma Bro" persona on social media, was convicted Friday on federal charges he deceived investors in a pair of failed hedge funds.

Prosecutors had accused Shkreli of repeatedly misleading investors about what he was doing with their money. Mostly, he was blowing it with horrible stock picks, forcing him to cook up a scheme to recover millions in losses, they said.

Shkreli, 34, told "lies upon lies," including claiming he had $40 million in one of his funds at a time when it only had about $300 in the bank, Assistant U.S. Attorney Alixandra Smith said in closing arguments. The trial "has exposed Martin Shkreli for who he really is -- a con man who stole millions," added another prosecutor, Jacquelyn Kasulis.

But the case was tricky for the government because investors, some wealthy financiers from Texas, testified at the trial conceded that Shkreli's scheme actually succeeded in making them richer, in some cases doubling or even tripling their money on his company's stock when it went public. The defense portrayed them as spoiled "rich people" who were the ones doing the manipulating.

"Who lost anything? Nobody," defense attorney Ben Brafman said in his closing argument. Some investors had to admit on the witness stand that partnering with Shkreli was "the greatest investment I've ever made," he added.

For the boyish-looking Shkreli, one of the biggest problems was not part of the case - his purchase in 2014 of rights to a life-saving drug that he promptly raised the price from $13.50 to $750 per pill. Several potential jurors were kept off the panel after expressing distain for the defendant, with one calling him a "snake" and another "the face of corporate greed."

The defendant also came into the trial with a reputation for trolling his critics on social media to a degree that got him kicked off Twitter and for live-streaming himself giving math lessons or doing nothing more than petting his cat, named Trashy. Among his other antics: boasting about buying a one-of-a-kind Wu-Tang Clan album for $2 million.

During about a month of testimony, Shkreli appeared engaged at times, grinning when his lawyer described him as a misunderstood misfit. Other times he looked bored, staring into space and playing with his hair.

Shkreli, who comes from an Albanian family in Brooklyn, was arrested in 2015 on charges he looted another drug company he founded, Retrophin, of $11 million in stock and cash to pay back the hedge fund investors. Investors took the witness stand to accuse Shkreli of keeping them in the dark as his scheme unfolded.

"I don't think it mattered to him -- it was just what he thought he could get away with," said Richard Kocher, a New Jersey construction company owner who invested $200,000 with Shkreli in 2012. "It was insulting."

Shkreli's lawyer agreed his client could be annoying, saying, "In terms of people skills, he's impossible," and referring to him as a "nerd" and a "mad scientist." But he said his hedge fund investors knew what they were getting.

"They found him strange. They found him weird. And they gave him money. Why? Because they recognized genius," Brafman said, adding that they had signed agreements that his client wasn't liable if they lost their money.

Jurors also heard odd vignettes befitting the quirky defendant: how Shkreli slept on the floor of his office in a sleeping bag for two years; how a drug company board member and former American Express executive wrote an email saying he'd meet with Shkreli "only if I can touch your soft skin"; how Shkreli wrote a letter to the wife of an employee threatening to make the family homeless if the man didn't settle a debt

Shkreli didn't testify. But rather than lay low like his lawyers wanted, he got into the act by using Facebook to bash prosecutors and news organizations covering his case. In one recent post, he wrote, "My case is a silly witch hunt perpetrated by self-serving prosecutors. ... Drain the swamp. Drain the sewer that is the (Department of Justice.)"

The judge ordered Shkreli to keep his mouth shut in and around the courtroom after another rant to new reporters covering the trial.