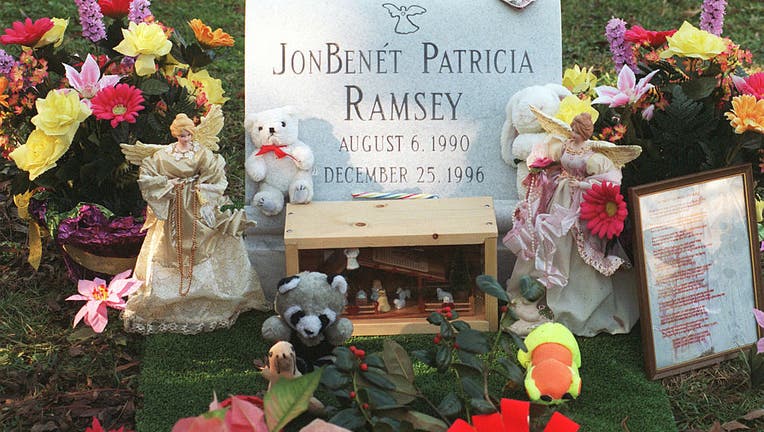 (Original Caption) The grave of JonBenet Ramsey, it is still not known who murdered her. (Photo by Chris Rank/Sygma via Getty Images)

Ahead of the 26th anniversary of the mysterious death of JonBenét Ramsey, Colorado police say they have launched a new investigation into the murder of the 6-year-old, in hopes of cracking the 1996 cold case.

The Boulder Police Department said it is partnering with the Colorado Cold Case Review Team in order to find answers into the case that has puzzled experts and internet sleuths alike.

"Since JonBenét’s murder, detectives have investigated leads stemming from more than 21,000 tips, letters, and emails. We have traveled to 19 states to interview or speak with more than 1,000 individuals," the Boulder Police Department said in a statement Wednesday.

JonBenét, a child beauty queen, was reported missing from her family's home in Boulder the morning of Dec. 26, 1996, by her mother. According to reports, a mysterious ransom note was found demanding $118,000 in exchange for the girl's safe return.

John Bennett, the girls father, found her body in the basement of the family home the same day she was reported missing. The girl had been brutally beaten, strangled and had signs of sexual assault.

John, her mother Patsy and brother Burke were the only ones who were known to be home when her body was found.

The parents eventually received allegations from the public that they had killed their daughter and covered up the murder before they were both cleared in 2008 by police when DNA of an unidentified party was found on JonBenét’s pajama pants.

Most recently, John Ramsey is supporting an online petition asking Colorado’s governor to intervene in the investigation into her death more than 25 years ago by putting an outside agency in charge of DNA testing in the case.

Ramsey said he wants DNA evidence that was never tested before to be transferred away from Boulder police to a different agency, KUSA-TV reported Sunday.

"Somehow we’ve got to force the police, or take it away from them, the ability to go ahead and test some of the crime scene evidence that was never tested for DNA," he said. "Why that’s never been done and will never be done by the police baffles me."

The petition notes that advancements in DNA and the use of genetic genealogy is leading to the solving of more cold case around the country. It criticizes the Boulder Police Department for not doing enough to use DNA to solve the case, noting that the department said at the time of the 25th anniversary of JonBenet’s death that it was "actively reviewing genetic DNA testing processes" to see if those could be applied to the case.

In a statement, a spokesperson for Gov. Jared Polis said "The State will review the petition and look into how the state can assist in using new technology to further investigate this cold case and to identify JonBenet Ramsey’s killer." The statement did not address the involvement of Boulder police.

"We have a shared goal to bring justice—and hopefully some peace—to JonBenet’s family and everyone who was impacted by her loss," Police Chief Maris Herold said in the statement.

The police department was criticized for its initial handling of the investigation into the death of JonBenet, who had competed in beauty pageants.

The details of the crime and video footage of JonBenet from the pageants propelled the case into one of the highest-profile mysteries in the United States, unleashing a series of true-crime books and TV specials.

While the district attorney at the time of JonBenet’s death said her parents were under "an umbrella of suspicion" early on, tests in 2008 on newly discovered DNA on her clothing pointed to the involvement of an "unexplained third party" in her slaying, and not her parents, John and Patsy Ramsey, or their son, Burke. That led former district attorney Mary Lacy to clear the Ramseys of any involvement, two years after Patsy Ramsey died of cancer, calling the couple "victims of this crime."