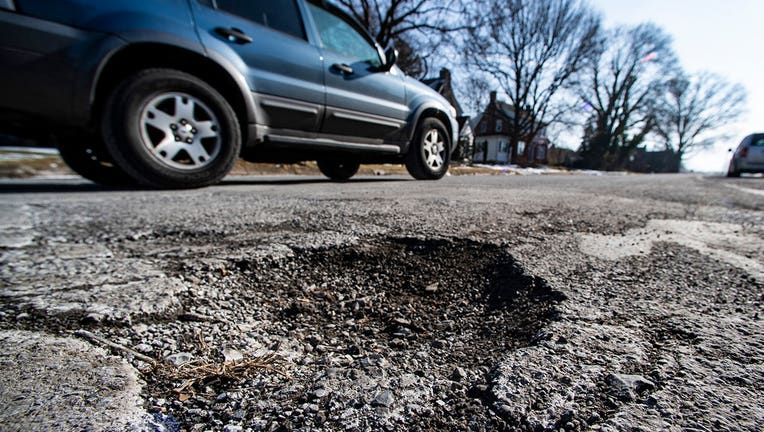 A pothole is pictured here on a street. (Photo by Ben Hasty/MediaNews Group/Reading Eagle via Getty Images)

Ever been the victim of a pothole?

That sinking feeling when you drive full speed over a deep rut in the road never fails to give a fearful jolt.

Between the risk of bottoming out or damaging a tire, those fears aren’t so outlandish, based on a variety of statistics.

TRAFFIC IS NOW THE WORST IN THESE 5 U.S. CITIES – IS YOURS HERE?

For all those who are setting off on spring and summer road trips this year — and at the peak of pothole season — here are a few key things to know before hitting the road.

One in 10 drivers need car repairs after hitting a pothole

In 2021, one in 10 drivers who hit a pothole sustained enough damage to warrant repairs, according to a new survey from AAA.

Pothole victims are also likely to have a second incident requiring repairs, bringing attention to the need for winter road repairs.

"When a vehicle hits a pothole with any kind of force, the tires, wheels and suspension get the brunt of the impact and fixing any of those items is pricey."

11% of AAA roadside help calls in winter, spring were tire-related

AAA received 1.8 million tire-related roadside assistance calls in the winter and spring of 2021, the organization said.

NY MAN CYCLING ACROSS AMERICA FALLS IN LOVE WITH CINCINNATI

Potholes are formed from moisture collected in cracks and crevices that expand and contract due to cool temperature fluctuation.

The weight of passing vehicles breaks up the pavement, eventually creating a deep hole known for wreaking havoc mostly on tires, alignment, suspension and shocks.

Even though there’s no way to decipher if tire trouble is a result of potholes in some cases, 11% of calls during this time were tire related.

Check your tires before heading out on the road to avoid potentially expensive pothole damage, AAA advises.

Be sure to test tread depth and tire pressure, as well as suspension and alignment by monitoring changes in vehicle handling or excessive vibration.

THESE CITIES HAVE JUST BEEN NAMED THE ‘MOST WELCOMING’ IN AMERICA

While the health of your vehicle is important for staying safe, being alert yourself behind the wheel will lessen your chances of hitting a pothole.

Avoid driving through puddles or any standing water that may disguise a pothole beneath.

What to do when you can’t avoid a pothole

For starters, don’t panic — and don’t slam on the brakes.

Drivers should, instead, gradually reduce their speed, minimizing extra force to the tire and decreasing the chance of severe damage, AAA recommends.

After pothole impact, take notice of any unusual vehicle behavior, such as new noises or vibrations. Also, consider having your car inspected.

40% of major U.S. roads are in poor or mediocre condition

Almost half of all major roads in America need a tune-up.

Forty percent of roadways nationwide are in less-than-OK condition, according to TRIP’s January 2022 report.

America’s roads, allowing drivers to maneuver 2.9 trillion miles annually, move a good portion of the $18.7 trillion worth of commodities transported across the country, the organization reported.

Around 62.9 million full-time jobs in industries such as tourism, retail sales and agriculture are completely dependent on ground travel, it also said.

Each motorist spends $621, on average per year, on repairs

The TRIP report revealed that individual drivers are spending $621 each on average per year in repairs, accelerated vehicle depreciation, increase fuel consumption and wear and tear on tires — totaling about $141 billion in overall cost.

In 2019, the U.S. confronted a $786 billion backlog in needed roads and bridges improvements, according to a status report submitted to Congress by the U.S. Department of Transportation (USDOT).

President Biden’s Infrastructure Investment and Jobs Act forecasts to provide $407 billion in funds for highway, bridge and transit investments over the next five years.

Rhode Island has the most pothole complaints on Twitter

An October 2021 study by Clunker Junker calculated the U.S. states that had the most complaints about potholes via number of tweets.

Rhode Island came in at the top of the list — averaging 23.4 pothole complaints for every 1,000 km of road.

Report a pothole in your state

Most states encourage residents to report a pothole when they see one.

Some state departments of transportation offer more info on their websites, as well as toll-free number for reporting potholes, such as New York State Department of Transportation's (NYSDOT) hotline: 1-800-POTHOLE.