Prosecutors say Amber Guyger and her partner at Dallas PD had exchanged explicit text messages in the hours before she killed Botham Jean.

DALLAS - The fired Dallas police officer accused of murder for fatally shooting an innocent man in his own apartment was busy sexting one of her colleagues the night of the fatal shooting, prosecutors said on Monday.

The trial for Amber Guyger began on Monday, a little more than a year after she killed Botham Jean. Guyger faces a murder charge, but she claims the shooting was accidental and she went to the wrong apartment that night because she was fatigued after a lengthy shift that involved overtime.

But prosecutors said on Monday that Guyger wasn’t tired as her lawyers have claimed. They said she was alert and actively sexting with one of her male colleagues at the police department in the hours and minutes before the shooting took place. Some of the messages sent were deleted after the shooting, prosecutors said.

During a hearing on Monday morning, before opening statements, both sides argued over whether the texts and phone calls between Guyger and Martin Rivera would be allowed. Judge Tammy Kemp eventually agreed they would be admitted for evidence.

Prosectors then focused on Guyger's relationship and communication with her former Dallas police partner.

It was also revealed both Guyger and Rivera deleted all of those messages from their phones. It's unclear when that happened.

When asked why he deleted the messages off his phone, Rivera said: “that's not something I want to be reminded of. I don't keep messages saved unless it's of importance. 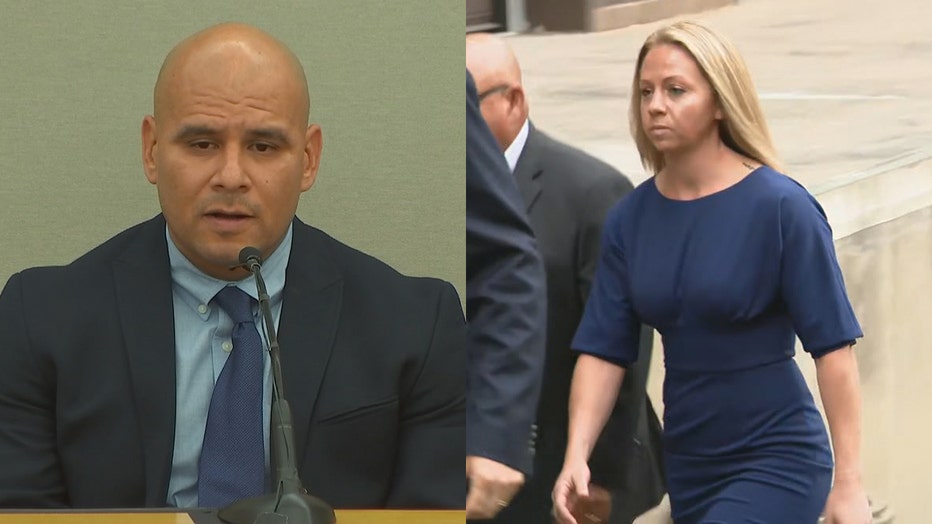 Hermus said in an opening statement that Guyger had worked overtime that day, mostly involving office work that was not strenuous.

Hermus said Guyger ignored multiple signs that showed she was on the wrong apartment floor on the night she killed her upstairs neighbor, Jean. One of those signs was a bright red doormat outside Jean’s apartment.

“Botham Jean wanted his apartment to be very noticeable. And he took steps to make sure that happened. In front of Botham’s apartment is this extremely obvious bright red floor mat, right in front of his door. I want to reiterate Amber Guyger had no floor mat,” he said. 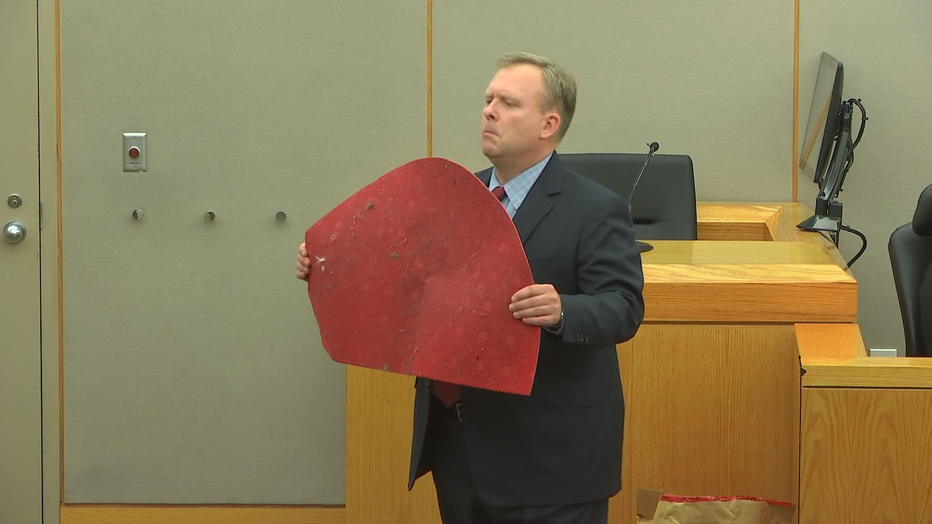 Hermus also discussed bullet trajectories suggesting Jean was in a crouched position when he was shot and argued Guyger didn’t do anything to try to save Jean after she shot him.

"She should've been giving 100 percent of her attention to that man. 100 percent," Hermus said.

"Should you be giving 100 percent of your attention to the person dying in front of you, if you can?" Hermus asked Rivera.

"Should you be sending text messages?" Hermus asked.

The opening statement from defense attorney Robert Rogers was mostly spent trying to poke holes in the arguments made by the prosecution.

Rogers said it was “preposterous” that the sexting and hook-ups involving Guyger and Rivera had any relevance to the case. He said their sexual hook-ups were in the past and their fling had ended.

Rogers told the jury what happened that night was just an unfortunate set of circumstances that led to the untimely death of Jean.

State, defense have competing views if Amber Guyger was distracted or exhausted

Opening statements from Amber Guyger's murder trial examined her state of mind the night she shot and killed her upstairs neighbor, Botham Jean.

“She's trying to process this as she's stepping into her apartment and at the same time, I'm sure Mr. Jean is thinking, ‘What is this person doing? Who is coming into my apartment.’ So he's confused. He's wondering what's going on. She's thinking what is going on? Why is this man in my apartment and she looks up and he's standing up. He's about 30 feet away from her. And I'm sure he's alarmed. But she's thinking. ‘Oh, my God. There's an intruder in my apartment’ and she's face-to-face with him. She's within ten yards of him and he starts approaching her. And she reacts like any police officer would, who has a gun with confronting a burglary suspect,” Rogers said.

Guyger's supervisor also testified saying that officers are always prepared for a possible ambush, but that she could have also considered a tactical retreat and walked away from his door and called SWAT if she did think he was an intruder.

Prosecutors immediately dealt with a controversial leak that happened the day of Jean’s funeral – that marijuana had been found in his apartment.

His sister Alissa Finley was the first person on the witness stand and talked about who he was to the family and his dreams. She was also asked about his marijuana use. She says it goes back to a health diagnosis he had while he was in college.

“He was diagnosed with ADHD and he was prescribed Adderall. He started taking the Adderall, but he always complained he didn't like how it made him feel. Like one, he couldn't sleep while he was on Adderall and then for him to speak he would have to stop taking it completely. He described it as crashing when he stopped taking it. It was always back and forth with it. So he stopped taking it completely and that's when he started smoking,” Finley said.

Attorney Russell Wilson is not involved with this case, but he is watching the case closely. He weighs in on the first day of testimony of the Amber Guyger murder trial.

Proceedings began Monday morning with Kemp ruling on motions from prosecutors and the defense, including a motion for a mistrial because of news coverage that aired on FOX 4 Sunday night.

Guyger’s defense team gave Judge Kemp a DVD copy of a story that included an interview with Dallas County District Attorney John Creuzot discussing the case. There is a gag order, meaning attorneys associated with the trial are not supposed to comment publicly.

Kemp questioned jurors individually to make sure they did not see the news coverage. She then denied the motion and told jurors they would be sequestered for the remainder of the trial.

Kemp also reminded everyone that laptops, cellphones and even Apple watches are not allowed in the courtroom to limit distractions. Out of the presence of the jury, she became frustrated because someone’s laptop started playing music during the proceedings. 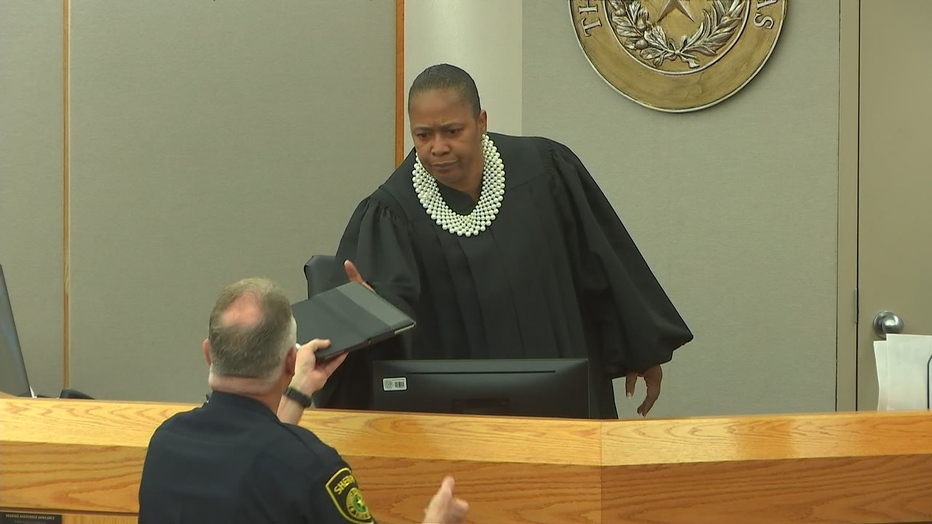 The trial is expected to last two weeks. The defense told jurors, most of whom are minority, that Guyger herself will take the stand.

FOX 4 News will cover the trial on air, online and on social media. CLICK HERE for an archive of stories related to the case.

Visit fox4news.com throughout the day or FOX 4 News on Facebook for a live stream. Reporters at the courthouse will also be sharing live updates on Twitter.