ST. PETERSBURG, Fla. - Dolphins are a common sight off our coast, but not like this one. A Pinellas County man caught a glimpse of a rare calf swimming near his backyard.

"I was just excited to see dolphins," Austin Sherman said.

He and his family recently bought a home in St. Petersburg. Last Wednesday, Austin was walking at Shore Acres Mini Park when he got lucky.

"Pulled out my phone to start recording, and as I looked left, there was a calf and a momma swam by," he said.

It is not a long video clip, but if you look closely, you can see there is something special about the young bottlenose dolphin swimming alongside its mother. It appears to be white.

"I thought, wow, I had no idea that baby dolphins were white. I must have done really poorly in biology in college," laughed Austin.

That light coloring is far from normal.

"There's a number of pigment conditions that can cause a dolphin to look pale. So I can’t say definitively that it is in fact an albino dolphin, but it was definitely interesting to see," explained Dr. Erin Fougeres, NOAA Southeast Region Marine Mammal Stranding Program administrator. 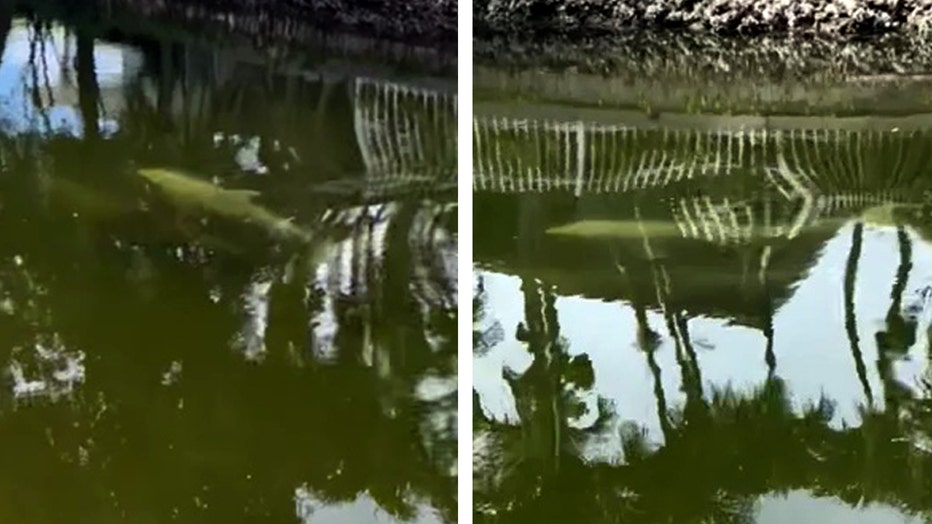 Albinism is a lack of pigment throughout the entire body, so the animal’s skin would be completely white with reddish eyes. According to NOAA, there have only been three reports of true albino bottlenose dolphins in the Gulf of Mexico.

"As a scientist, it is really exciting," Clearwater Marine Aquarium Marine biologist Savannah Gandee said back in April, when another white dolphin was spotted in the waters near Clearwater.

"We believe that there was some sort of gradual transition through time to this lighter coloration," Gandee said.

According to the aquarium, there have not been any recent sightings of Cherub and mom ‘Guardian.’

The researcher who oversees the photo ID catalog of all dolphins in the Gulf of Mexico tells FOX 13 News, based on this most recent video, she believes this is a new pair of dolphins spotted in St. Pete.

"You can identify individual animals by the patterns of nicks and notches on their dorsal fins. So she used the photos and the images from this animal to look at that, that other animal. And she says they're not the same," said Fougeres.

Austin’s post about the white dolphin has nearly 900 reactions and about 100 comments. Most neighbors thanked him for sharing his unique sighting.

"It was pretty cool, pretty cool experience. My neighbors were outside. I said, ‘I think I just saw a white dolphin.’ He goes, 'Man, I’ve lived here for like 20 years. I've never seen anything like that. That's really lucky,'" he said.

Experts encourage anyone who sees the white dolphin to observe from a distance, especially boaters. They say do not do anything to try to entice or harass the animal, and never feed wild dolphins.