The Rams take on the Seahawks tonight on FOX’s Thursday Night Football, so Dr. BBQ cooked up a recipe for a fish dish with a Hollywood flair.

The Rams take on the Seahawks tonight on FOX’s Thursday Night Football, so Dr. BBQ cooked up a recipe for a fish dish with a Hollywood flair.

Dr. BBQ says if you're not a fan of salmon, you can try the Hollywood salsa on just about any kind of fish, plus it also tastes great on chicken. He also notes that it goes very well served with rice pilaf.

Prepare the grill to cook directly over medium-high heat.

Toss the Asparagus, poblano and serrano with a little oil, then season lightly with salt and pepper. Grill the poblanos skin side down until they are fully charred. No need to flip. Remove to a plate and cover with plastic wrap.

Grill the serrano until it is lightly charred on all sides. Set aside.

Add the asparagus to the grill. Grill quickly until it has a little char and is soft. Remove to a platter and set aside. When it’s cooled, cut the asparagus into ½-inch pieces.

With a knife, scrape the blackened skin off of the poblanos, then cut them into small dice. Mince the serrano, removing the seeds if you want the salsa to be mild.

In a large bowl combine the poblano, serrano, asparagus, onion and tomato. Toss well. Add the cilantro, lime zest and juice, and a pinch of sugar if desired. Season with salt and pepper. Toss well, then set aside to rest at room temp.

Reset the grill to cook indirect over medium heat. Brush the salmon with olive oil, then season with salt and pepper. Spray a perforated grid or sheet pan with vegetable spray. Place the salmon skin-side down on the grid and place it on the grill. Cook for 20-30 minutes until the fish is firm to the touch and cooked through.

Transfer the salmon to serving plates. Toss the salsa and taste it. Add salt if needed.

Top each piece of salmon with a scoop of salsa. Serve any leftover salsa on the side with tortilla chips. 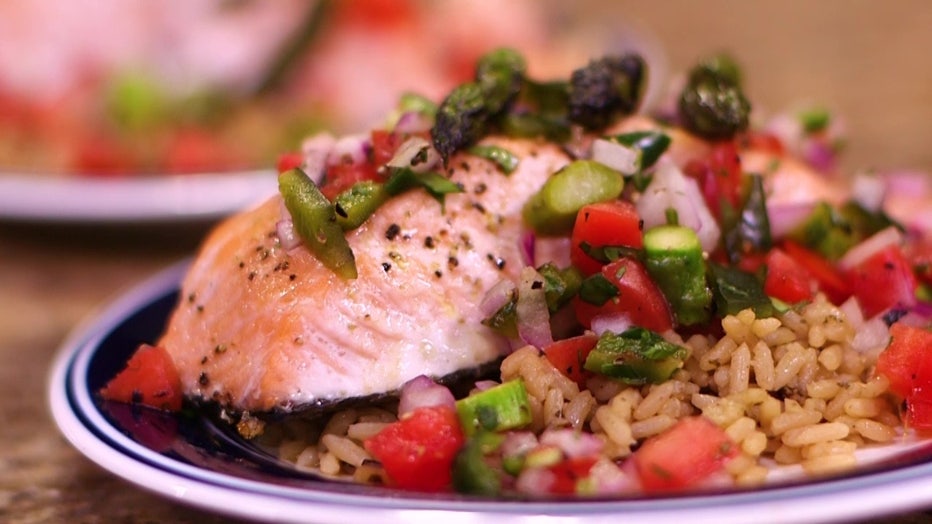