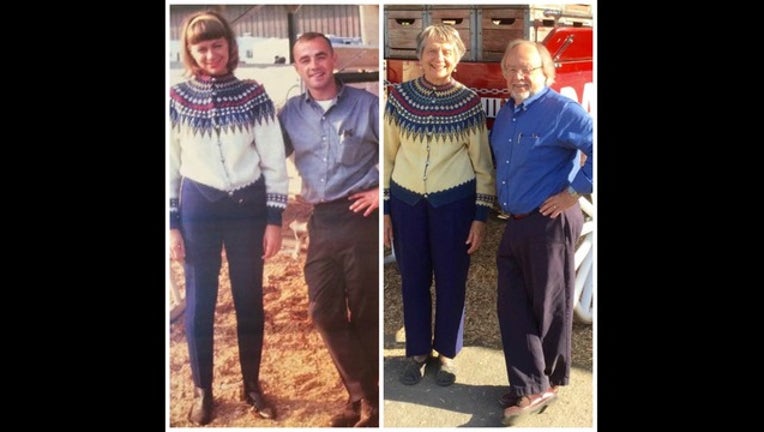 DUBLIN, Calif. (KTVU) - Dennis and Mary Ackley are gearing up to mark 50 years of marriage, with a heartwarming walk down memory lane.

November 5th is the day of their anniversary and as part of the run-up to the big milestone celebration, since last November, on the 5th of each month, the Dublin couple has been returning to restaurants where they have spent a previous anniversary.

And a few weeks ago, the Ackleys returned to the location where a keepsake photo was taken at the Washington State Fair back in 1965, when they were two young people in love, a year before they were to wed.

Dennis and Mary reenacted that moment. Mary dug up the same sweater she wore that day. And the two held the same pose as they stood in front of the same exact horse buggy wagon, now refurbished.

Mary called ahead of time to make sure the wagon was still there.

All the details of that day, as well as details of the restaurants the couple has visited for their many anniversaries are well documented.

"I'm a nutty person. I keep journals. I drive my husband crazy. After 50 years, I can still do that!" Mary jokes.

Longtime neighbor of 25 years, Patrice Van Dussen describes the Ackleys as dedicated, active members of the community, who have become family.

Van Dussen says the couple has become surrogate grandparents to her own boys, sending them care packages while in college and hopping on planes for their graduation and other important life events.

And there are others who warmly call Dennis and Mary their adopted Grandma and Grandpa.

That's in addition to the six grandkids of their own the Ackleys have from their two sons.

"This couple invests in other people; would do anything to help you," says Patrice Van Dussen.

With the big 5-0 about a month away, those who know Dennis and Mary would expect nothing short of a romantic outing, filled with nostalgic details all planned out.

So what's on the agenda?

Mary says they've already made reservations to the Space Needle in Seattle, where the couple spent their first anniversary.

Congratulations to 50 years of marriage and memories.