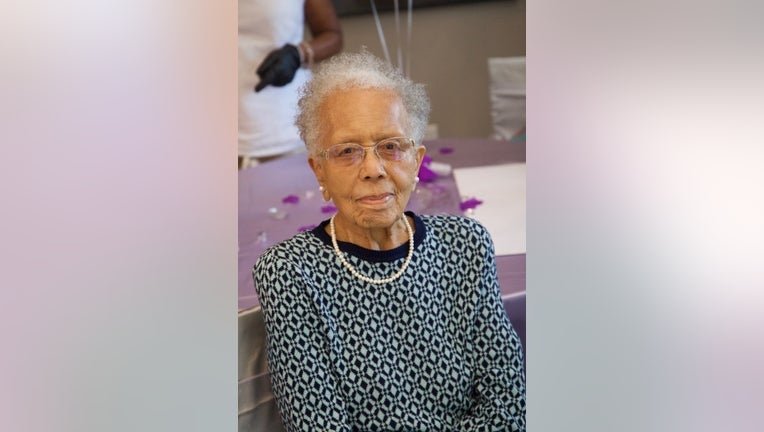 Born in 1913 in Jellico, Tennessee, Relda was raised in Kentucky. After graduating from school, she moved to Detroit to learn cosmetology and joined the Alpha Chi Pi Omega sorority.

It was in Michigan where she met the love of her life: Henry Mackins. Family members say that he was the only one in Jackson, Michigan who owned a car and she was tired of walking around the town. The couple married in 1941 and had a marriage that lasted 66 years.

Mackins opened her own beauty shop called Bea's Beauty Box and ran it for 30 years. After retirement, she went to volunteer at the local hospital and continued to help there for another 30 years. She became the oldest volunteer they had before she had to stop working at 91 years old.

In 2005, Mackins and her husband moved down to Georgia to be with their daughter and family, eventually living at Antioch Manor Estates. At the Manor, Mackins was given the nickname "Honey Bea" for how much she wanted to help others in need. She would cook, clean, and bake delicious treats for everyone.

When Mackins isn't helping others, she could be found riding her 35-year-old stationary bike. The centenarian also always had a strong Christian faith. In Michigan she volunteered at one of the local Baptist churches. When she moved down to Georgia, she joined the Antioch AME Church. The church plans to recognize and celebrate her on her birthday in August.

When asked about her secret to having a long life, Mackin responded, "you must ask JC (Jesus Christ) about that."

From all of us here at FOX 5, happy birthday Mrs. Mackin!