The Pits and Giggles Rescue based in Charlotte, North Carolina posted stunning photos of Pickles while she was pregnant.

“She was so excited she could hardly sit still,” Lauren Casteen Sykes, a volunteer with the rescue, told The Dodo. “She loves affection and treats and was happy to participate! The hardest part was getting her to stay because she loves people SO much!” 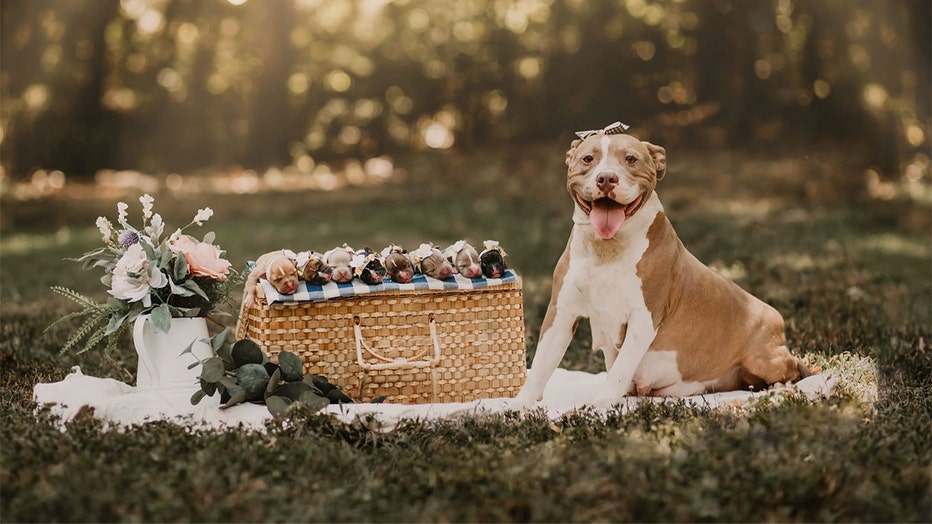 A few days after her maternity shoot, Pickles went into labor.

“When this happens most of our mama dogs want space and privacy, not so with Pickles!  This mama needed people with her before she was comfortable bringing her babies in to the world.  She spent the night with her head or body in our laps, needing affection and comfort as she struggled through labor pains,“ said Amanda Forsythe, president and founder of Pits & Giggles Rescue.

Then, after the first photo shoot, Pickles had another one where she posed with her eight beautiful puppies.

Pickles will need special care postpartum, as many of the dogs that come to the rescue have been bred repeatedly “and it takes a toll on their bodies” Forsythe said, adding that they're often heartworm positive and carry “a luggage rack of other medical issues.”

But Mama Pickles’ current litter will be her very last, Forsythe said.

Pickles was found as a stray and brought to a rural shelter, after which Pits and Giggles took her in.

“When the opportunity came to save her we were thrilled,” Forsythe said.

Forsythe said they ensure that their rescued dogs and their babies are spayed or neutered and adopted to homes “where they will be loved for life!” “Pickles is spending her days right now nursing her babies and enjoying a quiet, safe sanctuary full of peanut butter and biscuits,” she said. “She will be ready for adoption when her babies have been weaned and she's had a chance to recover physically.”

The rescue is directing any interested applicants to their website for more information about adopting Mama Pickles.