Someone broke into the San Francisco Zoo overnight and stole a ring-tailed lemur, police said Wednesday.

A zoo spokeswoman Nancy Chan said when staff did their morning head count Wednesday, they discovered that one of the most cherished members of the zoo's lemur family was gone. They notified police around 9:40 a.m.

SFPD investigators found evidence of a forced entry to the lemur enclosure and processed the scene for evidence. "We didn't find any indication that any other part of the zoo was targeted," said Officer Robert Rueca, a San Francisco Police Department spokesman.

They're seeking tips from the public for Maki, the male lemur's, safe return. Police are reviewing surveillance video in and around the zoo.

Maki is one of 19 lemurs at the zoo. The creatures are native to only Madagascar just off the coast of Africa.

Zoo staff worry that whoever took Maki might not be familiar with the special care lemurs need.

“We understand that lemurs are adorable animals, but Maki is a highly endangered animal that requires special care. We are asking the public for help in his return," said Dr. Jason Watters, Executive Vice President of Animal Behavior and Wellness. 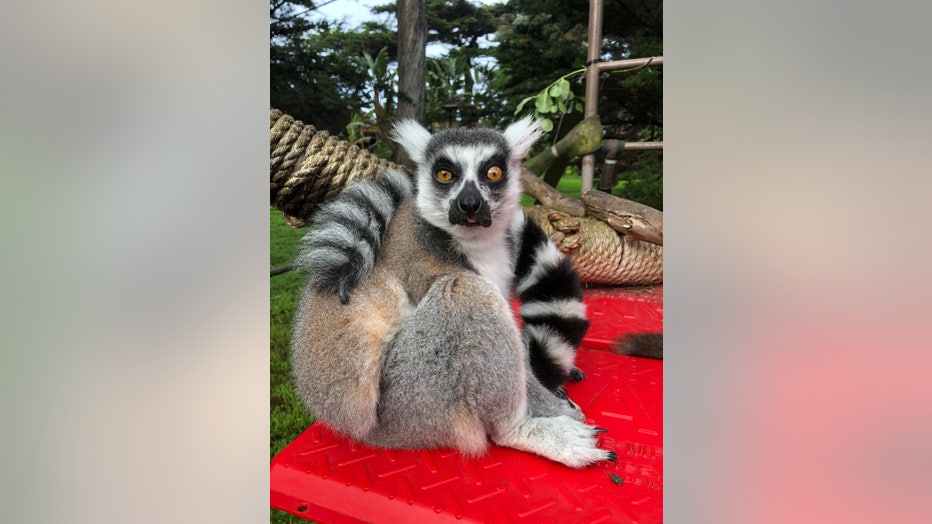 Because of Maki's accelerated age, he requires a specialized diet. Maki, at 21-years-old, has exceeded the average life expectancy of a lemur, which is about 16 years. Zoo officials say that also makes him slow and easy to catch.

"I'm not even sure they can feed this animal, so that's crazy, I think it's endangering the lemur," said Nick Maquaire, a passerby near the San Francisco Zoo.

"Guests can see the lemurs from several vantage points: from across a surrounding pond, looking eye to eye at lemurs in the trees or gazing down below from an elevated boardwalk," the zoo's website says.

Ring-tailed lemurs happen to be the most recognizable of lemur species. They are gray in color with a black and white striped tail. They are also banned as pets in the state of California.

If Maki is confirmed to be stolen, it would not be the first time
an animal at the zoo has been stolen.

Back in 2011, suspects allegedly snuck into the zoo overnight,
cutting a perimeter gate and climbing atop a primate shelter in order to cut into mesh and steal 17-year-old squirrel monkey Banana Sam. The next day, however, a resident located the animal in bushes at Stern Grove and placed him in a backpack before contacting authorities, who then returned him to the zoo.

The culprits in the 2011 case were never apprehended.

In December 2000, two teenaged boys were found to have stolen a pair of koalas from the zoo. They were apprehended and the koalas were returned with some minor injuries.

If the public has information, please call SFPD’s 24 Hour Tip Line at 1-415-575-4444 or Text a Tip to TIP411 and begin the text message with SFPD. Be prepared to give the location of the lemur and the description of anyone in possession of him.