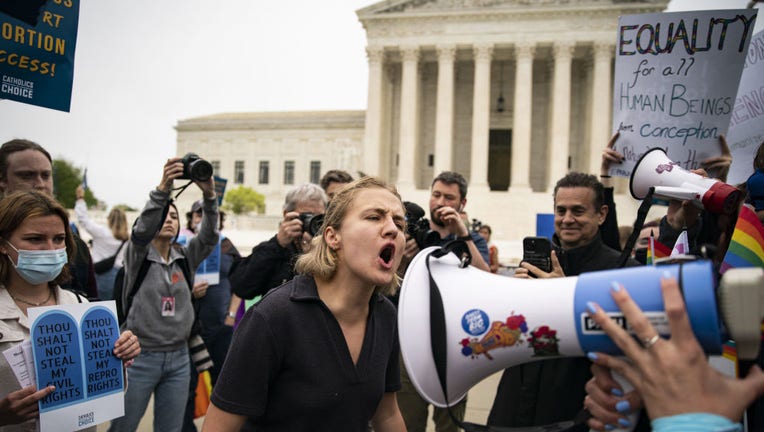 Pro-life and pro-choice demonstrators during a protest outside the U.S. Supreme Court in Washington, D.C., U.S., on Tuesday, May 3, 2022. (Al Drago/Bloomberg via Getty Images)

WASHINGTON - Abortion rights have been a divisive issue for decades. The issue is making headlines again this week after a draft opinion suggested the U.S. Supreme Court could be poised to overturn the landmark 1973 Roe v. Wade case that legalized abortion nationwide, per a Politico report.

The court confirmed the authenticity of the leaked draft, which was dated to February, and Chief Justice John Roberts said he had ordered an investigation into what he called an "egregious breach of trust." A court statement emphasized that the draft is not the justices' final word.

Meanwhile, a review of some national polls reveal most Americans support a woman’s right to choose. Here’s a look at how voters feel:

What polls say about abortion rights

The Gallup poll results were based on telephone interviews conducted May 3-18, 2021 with a random sample of –1,016—adults, ages 18+, living in all 50 U.S. states and the District of Columbia.

The Pew Research Center released a report last May focusing on public opinions about abortion from 1995 to 2001. The poll revealed that 59% said abortion should be legal in all or most cases compared to 39% who said it should be illegal in all most cases. The report gathered views on abortion based on gender, religious affiliation, party identification, political party, and ideology.

RELATED: Roe v. Wade: What you need to know about a key abortion ruling that the Supreme Court looks poised to overturn

Quinnipiac’s abortion responses was part of a 2021 poll that gathered responses on a range of topics including COVID-19 vaccines, masks, and the Supreme Court’s job performance. The polls are based on a random sample of adults, 18 years of age and older. According to Quinnipiac, a random sample is one in which everyone in the population has an equal chance of being selected. Sample sizes regularly consist of over 1,000 respondents.

In January, CNN conducted a poll asking Americans their stance on the Supreme Court possibly overturning Roe v. Wade. Most Americans said if Roe v. Wade is changed, they would want to see their state have more tolerant abortion laws.

According to the poll, 69% of Americans were opposed to the Supreme Court overturning its Roe v. Wade decision while 30% said they would like to see the SCOTUS completely overturn their decision. Additionally, 59% of Americans said if Roe v. Wade was overturned by the Supreme Court, they would like to see their states have less restrictive abortion laws.

CNN’s poll was conducted between Jan. 13-18 among a random sample of 1,000 adults surveyed online after being recruited using probability-based methods.

RELATED: ‘Not on my watch.’ Walz responds to leaked Roe v Wade opinion reported by Politico

An AP-NORC poll last December revealed that Democrats increasingly see protecting abortion rights as a high priority for the government.

Other polling shows few Americans want to see Roe overturned. In 2020, AP VoteCast found that 69% of voters in the presidential election said the Supreme Court should leave the Roe v. Wade decision as is; just 29% said the court should overturn the decision. In general, AP-NORC polling finds a majority of the public favors abortion being legal in most or all cases.

Still, when asked about abortion policy generally, Americans have nuanced attitudes on the issue, and many don’t think that abortion should be possible after the first trimester or that women should be able to obtain a legal abortion for any reason.

Twenty-six states are certain or likely to ban abortion if Roe v. Wade is overturned, according to the pro-abortion rights think tank the Guttmacher Institute. Of those, 22 states already have total or near-total bans on the books that are currently blocked by Roe, aside from Texas.

The state's law banning it after six weeks has already been allowed to go into effect by the Supreme Court due to its unusual civil enforcement structure. Four more states are considered likely to quickly pass bans if Roe is overturned.

Sixteen states and the District of Columbia, meanwhile, have protected access to abortion in state law.

Oklahoma, for example, passed several bills in recent weeks, including one that goes into effect this summer making it a felony to perform an abortion. Like many anti-abortion bills passed in GOP-led states this year, it does not have exceptions for rape or incest, only to save the life of the mother.

Eight Democratic-leaning states protected or expanded access to the procedure, including California, which has passed legislation making the procedure less expensive and is considering other bills to make itself an "abortion sanctuary" if Roe is overturned.

A draft opinion suggests the U.S. Supreme Court could be poised to overturn the landmark 1973 Roe v. Wade case that legalized abortion nationwide.

The decision to overrule Roe would lead to abortion bans in roughly half the states and could have huge ramifications for this year's elections. But it's unclear if the draft represents the court’s final word on the matter — opinions often change in ways big and small in the drafting process.

In the opinion, Justice Samuel Alito says the 1973 landmark decision guaranteeing constitutional protections of abortion rights, must be overruled. Alito, a member of the court's 6-3 conservative majority who was appointed by former President George W. Bush, went on to criticize the 1992 decision from Planned Parenthood versus Casey, which upheld the right to an abortion.

The report comes amid a legislative push to restrict abortion in several Republican-led states — Oklahoma being the most recent— even before the court issues its decision. Critics of those measures have said low-income and minority women will disproportionately bear the burden of the new restrictions.

What politicians are saying about possible overturn of Roe v. Wade

President Joe Biden said Tuesday that the "basic fairness and the stability of our law demand" that the court not overturn Roe. While emphasizing that he couldn’t speak to the authenticity of the draft, Biden said his administration is preparing for all eventualities for when the court ultimate rules and that a decision overturning Roe would raise the stakes for voters in November’s heated midterm elections.

House Speaker Nancy Pelosi and Sen. Chuck Schumer released a joint statement that read in part: "If the report is accurate, the Supreme Court is poised to inflict the greatest restriction of rights in the past fifty years – not just on women but on all Americans. The Republican-appointed justices' votes to overturn Roe v. Wade would go down as an abomination, one of the worst and most damaging decisions in modern history."

California Gov. Gavin Newsom posted reaction on Twitter, saying: "Our daughters, sisters, mothers and grandmothers will not be silenced. The world is about to hear their fury. California will not sit back. We are going to fight like hell." By late Monday evening, the governor along with members of the state legislature proposed an amendment to enshrine the right to choose in the California Constitution.

New York Gov. Kathy Hochul, also a Democrat, said people seeking abortions could head to New York. "For anyone who needs access to care, our state will welcome you with open arms. Abortion will always be safe & accessible in New York," Hochul said in a tweet.

Mississippi Attorney General Lynn Fitch said in a statement, "We will let the Supreme Court speak for itself and wait for the Court’s official opinion." But local officials were praising the draft.

What happens next with Roe v. Wade?

The court is expected to rule on the case before its term ends in late June or early July.

Congress could act, too, though a bill that would write Roe's protections into federal law stalled in the Senate after passing the House last year with only Democratic votes.

Only Chief Justice John Roberts seemed prepared to take the smaller step of upholding the 15-week ban, though that too would be a significant weakening of abortion rights.

Until now, the court has allowed states to regulate but not ban abortion before the point of viability, around 24 weeks.

FOX6 Milwaukee, FOX2 San Francisco, and the Associated Press contributed to this story. This story was reported from Washington, D.C.