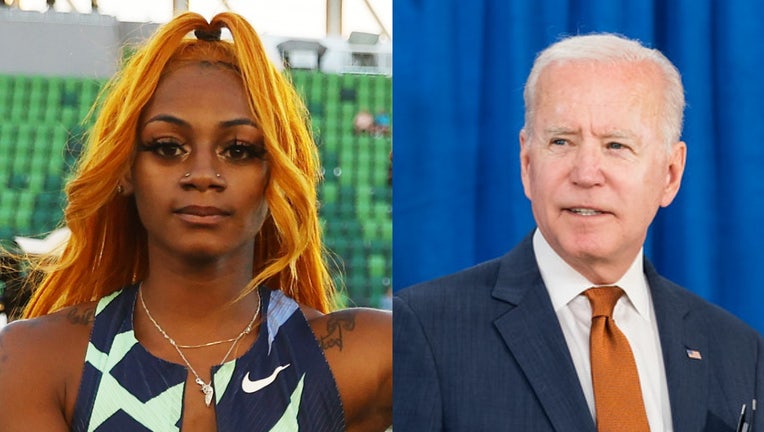 President Biden gave a muted response Saturday to sprinter Sha’Carri Richardson’s suspension due to a positive marijuana test that will cut her from the Tokyo Olympics later this month.

Richardson, 21, a Dallas native, apologized Friday, explaining she had used the drug to cope with the loss of her biological mother who died soon before the race in which she tested positive.

Unlike Biden, progressive Democrats have balked at the suspension, many linking it to racism.

"The notion that weed is a problematic ‘drug’ is rooted in racism," he wrote. "It’s insane that Team USA would disqualify one of this country’s most talented athletes over thinking that’s rooted in hatred. It’s something they should be ashamed of. Also if weed made you fast, I’d be FloJo."

Others, like Democratic U.S. Rep. Pramila Jayapal, D-Wash., used the moment to advocate for the drug’s legalization. "It’s LONG overdue that we legalize marijuana," she tweeted.

"The press who love to bathe in the intersectionality of race-gender-sports should ask @JoeBiden if he believes Sha’carri Richardson should be barred from representing America for using a drug legal in most states that doesn’t impact performance, U.S. Rep. Matt Gaetz, R-Fla., tweeted Friday. "I sure as hell don’t."

Biden hasn’t been an advocate for federal legalization of marijuana but spoke about decriminalizing possession during the 2020 campaign.

The Biden White House also controversially fired or reprimanded several young staffers earlier this year after they admitted to "past marijuana use" in security clearance forms.

Marijuana isn’t a performance-enhancing drug but it’s banned by the World Anti-Doping Agency, which USA Track and Field follows.

Richardson won the 100 meters at the U.S. Olympic Track and Field Trials on June 19 in Eugene, Oregon, but tested positive at the competition, invalidating her victory and invoking a one-month suspension from the sport.

She made her apology during an appearance on NBC's "Today" show.

"I apologize. As much as I'm disappointed, I know that when I step on the track I represent not only myself, I represent a community that has shown great support, great love," she said. "I apologize for the fact that I didn't know how to control my emotions or deal with my emotions during that time."