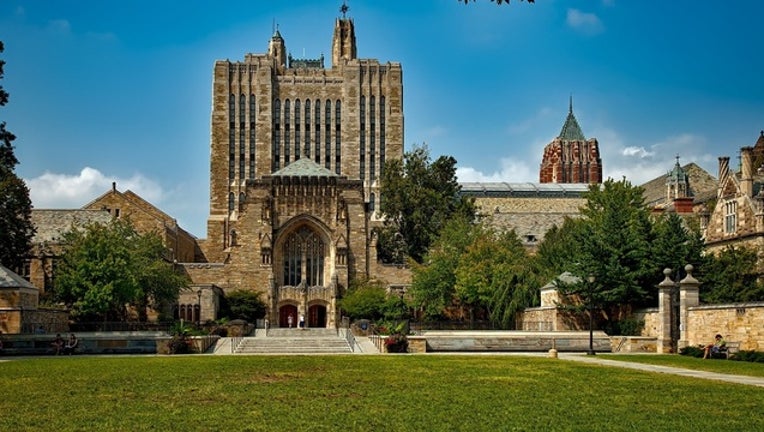 (AP) - A college entrance exam policy aimed at helping students with disabilities was exploited to enable cheating in what is being described as the biggest school admissions scandal ever prosecuted by federal authorities, according to court papers.

At least 50 people were charged in the scheme, which included not only cheating on the admissions tests but also bribing coaches to gain admission for students into elite schools. Among the defendants were actresses Felicity Huffman and Lori Loughlin.

A federal affidavit made public Tuesday details allegations of test administrators being bribed "to allow a third party to facilitate cheating" on the ACT and SAT exams. The document says that in some cases, that involved providing answers, correcting answers after the fact or having someone else pose as the student to take the test.

The College Board, which runs the SAT, and ACT Inc. provide accommodations for students with medically documented disabilities that can include giving students extra time to complete the test or allowing them to take it alone under the supervision of a proctor.

Both organizations are now defending the integrity of their testing process.

The College Board said it has seen an increase in disabilities accommodations request in recent years as more students have opted to take its exams.

"The College Board has a comprehensive, robust approach to combat cheating, and we work closely with law enforcement as part of those efforts. We will always take all necessary steps to ensure a level playing field for the overwhelming majority of test takers who are honest and play by the rules," the nonprofit said in a statement.

The court documents revealed how some wealthy families exploited the rite-of-passage exam that most high schoolers endure in order to apply for college admission. Clients paid $15,000 to $75,000 per test, according to the documents, "with the payments typically structured as purported donations" to a charity run by a cooperating witness.

According to the federal affidavit, parents were told by the witness, referred to as CW-1, who founded the Edge College & Career Network, also known as The Key, to have their children "purport to have learning disabilities" so they could get the medical documentation and then request to take the exam at one of two test centers the witness controlled. There, the court papers said, the cheating occurred.

The doctored exams were then sent back to the testing organizations for grading.

The court papers include a conversation between one of the defendants in the case, Gordon Caplan, and the witness that was obtained through a wiretap.

"Caplan: And it works?

A private school director in Los Angeles and a public high school teacher in Houston have been charged with racketeering conspiracy for their role as paid standardized test administrators for both The College Board and ACT Inc.

Officials with the ACT said it contracts with thousands of people to administer its college entrance exam around the country and slammed "the few bad actors who have attempted to undermine a fair testing environment." ACT also urged people to report suspected cheating through its security hotline.

"We appreciate the efforts of the authorities and the attention that they have brought to the importance of fairness in testing," ACT said in a statement.

The typical testing experience has students taking the fee-based exam at their high school or a nearby school test site in their community. It's most often done in a group setting, a timed environment and monitored by familiar school staff, such as teachers and counselors contracted by ACT and SAT officials, experts said.

Students arrive on the date with photo identification, which is matched to their preregistration information and the photo they send to the ACT and SAT administrators validating who they are.

Students with disabilities who receive school accommodations and are served by the federal Individualized Education Program can apply directly to the ACT and SAT for similar accommodations, which may include testing documents in Braille for blindness, a text reader for dyslexia, snack breaks for diabetes, and extended time or one-on-one testing for attention deficit disorders.

The College Board said it has dedicated staff to consider such requests and may request documentation to vet it.

Rachel Rubin, co-founder of Spark Admissions near Boston, said it's common for families to get psychiatric evaluations for their children so that they can get extra time for the SAT or ACT or take it over multiple days or in a quiet room. She said such exams usually aren't covered by insurance and can cost thousands of dollars, yet another way the wealthy can get a leg up over the less fortunate.

Jayne Fonash, a recently retired high school counselor in Virginia and the president-elect of the National Association for College Admission Counseling, said in her two decades of working with students to take college exams, it was extremely rare for a disability request to be denied.

Fonash said she served as a test administrator for many years with both test makers. She said she was paid about $100 to supervise a testing room or about $400 to manage an entire test site.

"They're not doing it for the money. They're doing it so students have access to this testing opportunity," Fonash said of the educators who run the tests so that their students can take them in a place they are familiar with and comfortable. "It goes to show the length that some parents and some professionals go to manipulate the process."