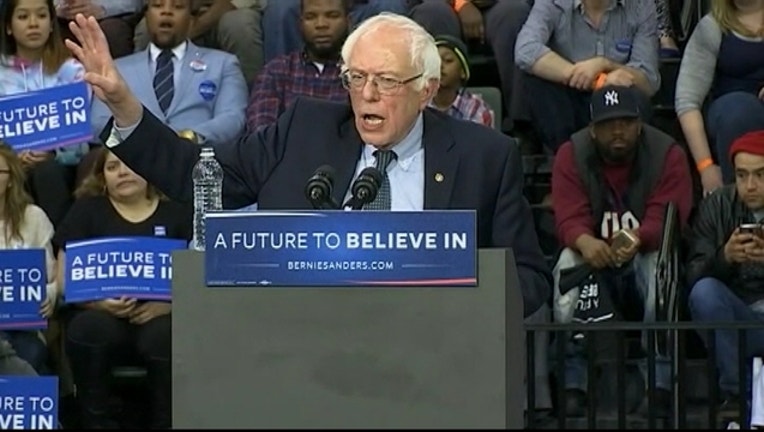 Remember those superdelegates, the Democratic Party leaders and elected officials who can vote for the candidate of their choice? The ones Sanders' supporters have been complaining about for months? It turns out, to have a shot at beating out Hillary Clinton for the Democratic nomination for president, he needs them.

A lot of them.

He needs the ones who remain uncommitted, as well as more than 200 of those who have already publicly endorsed Clinton. Mathematically, Sanders cannot win the nomination without that support.

On Saturday, Sanders netted more than two dozen delegates over Clinton in Washington state after the party released vote data broken down by congressional district.

But his math remains dire.

Clinton won the Guam caucus on Saturday and how needs just 17 percent of the delegates at stake in upcoming contests to clinch the nomination. That means she could lose every single contest by a landslide and still be the nominee if all of her superdelegates continue to support her.

The totals include delegates won in primaries and caucuses, as well as public endorsements from superdelegates.

As it stands, Clinton is 154 delegates away from clinching the nomination.

These are the delegates won in primaries and caucuses. They are required to vote for the candidate who won them.

Early in the campaign, Sanders said his plan was to win a majority of pledged delegates, which would persuade the superdelegates to support him as well.

Clinton has 1,706 pledged delegates. Sanders has 1,414. Clinton's 292-delegate lead in pledged delegates is far bigger than any lead Barack Obama had over Clinton during the 2008 primaries.

Sanders would need to win 66 percent of the remaining pledged delegates to close the gap. So far, he's won just 45 percent of them.

There are 714 superdelegates, mainly members of Congress and members of the Democratic National Committee. At the party's national convention, they can vote for the candidate of their choice.

So far, 523 have publicly endorsed Clinton and 39 have endorsed Sanders. That leaves 152 still uncommitted.

Just 154 delegates short, Clinton is on a glide path to the number needed to win on June 7 when polls close in New Jersey at 8 p.m. EDT, even if she narrowly loses all the contests between now and then.

If she can instead pull out solid victories this month in West Virginia, Kentucky and Oregon — and get some additional endorsements from superdelegates — Clinton could end up celebrating as a presumptive nominee in a place in need of some financial attention: Puerto Rico on June 5.

At least one of its superdelegates, Luisette Colon, earlier this year changed her support from Clinton to uncommitted, citing her desire to learn more about the candidates' positions on aiding the U.S. territory.

Clinton has recently sent advisers to Puerto Rico to learn more about the Zika virus and called on Congress to assist with the island's financial crisis. Sanders has also urged help for the island.

Sanders' steep path to 2,383 can only really end at the party's convention in Philadelphia, where he intends to give superdelegates all his attention and make the case he is the better general election candidate.

To win, Sanders will need to dominate the final few primaries and then sway more than 300 superdelegates to his side.