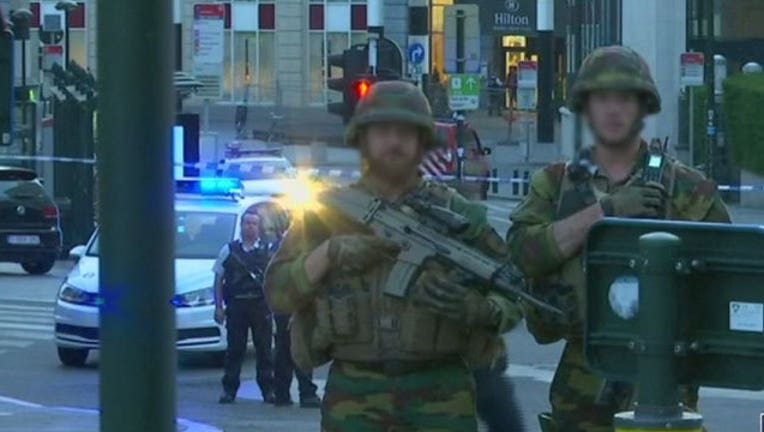 BRUSSELS (AP) - The quick shooting of an attacker who tried to detonate a nail bomb and shouted "Allahu akbar" at a Brussels train station averted fatalities, officials said Wednesday, as Belgium increased security measures around the country.

The attacker was a 36-year-old Moroccan national not known to authorities for being involved in terror activities, federal magistrate Eric Van der Sypt told reporters. He declined to say if the man had a criminal record.

The man charged soldiers at Brussels Central Station on Tuesday after his suitcase, containing nails and gas canisters, failed to fully explode, Van der Sypt said. It was a lucky escape for several travelers nearby.

The man then shouted "Allahu akbar," Arabic for "God is great," before the soldiers shot him dead, the magistrate said. Nobody else was injured.

"It was clear he wanted to cause much more damage than what happened," Van der Sypt said. "The bag exploded twice but it could have been a lot worse."

Earlier reports said the man was wearing an explosive belt, but Van der Sypt said that wasn't true. He said the man was from the Molenbeek neighborhood, the home and transit point for many of the suspects linked to attacks in Brussels and in Paris in November 2015.

Belgium has been on high alert since suicide bombers killed 32 people at the Brussels airport and a subway station on March 22, 2016.

Security remained high around rail facilities and preparations were underway to beef up security for a Coldplay concert at the 50,000-seat King Baudouin Stadium later Wednesday.

"In three years we have been confronted with several attacks or attempts and we say the zero risk does not exist," Prime Minister Charles Michel said after a specially-convened security meeting.

Burn marks remained on the floor at the scene, as workers continued to clean up and paint the area.

Belgium's Crisis Center said Wednesday that it sees no need to raise the national security alert level, which has been on its second-highest rung for more than a year. It said that no public events would be canceled but that additional police and troops have been mobilized.

Virginia Mayo in Brussels contributed to this report.