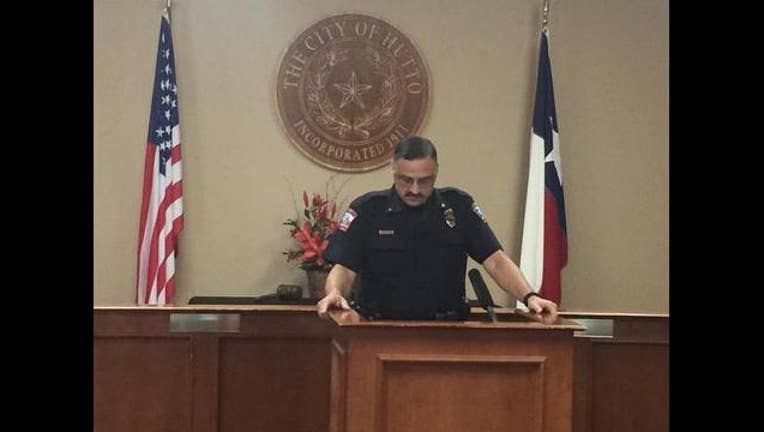 For the first time since Hutto Sgt. Chris Kelley was killed in the line of duty, his family and the Hutto Police Chief are speaking out. Kelley was killed Wednesday when he was run down by a suspect who gained control of his police car.

"Imagine when you wake up and you go to work, and you know that there's a possibility that this could happen, but then it does," said Earl Morrison, Hutto Police Department Police Chief.

Hutto Police officers may train hard, but Chief Earl Morrison says nothing could have prepared them for their fellow officer, Sgt. Chris Kelley's death.

"There were many who saw Sgt. Kelley dash out the door for his phone call, and we're still trying to understand why he never came back," said Morrison.

Kelly's family did not appear in person, but Chief Morrison relayed a statement from them, thanking the Hutto community for their love and support.

"Chris was our rock, he was our protector our strength and our joy," said Kelley's family.

Investigators say Kelley died after a suspect he was pursuing jumped into his police unit and ran over him.

"This is not one of those things we get into because it's glamorous, or because we are going to get rich. We're called to do this," said Morrison.

Morrison says Kelley interviewed him for the job he has today, and the two developed a bond like no other.

"I am here, because of him," said Morrison.

The Hutto Police Department and the Kelley family are not grieving alone. Sarah Castillo and her family believe Kelley's selfless spirit will resonate.

"It's just such a shame, someone so valuable to the community would have to do the ultimate sacrifice for us," said Castillo.

The police department remembers him as a funny character, and someone you can always laugh with.

"He was a jokester. As I said with his family yesterday, we recall how he can tell a story like nobody else," said Morrison.

"I promise you we will be leaning on God to get through this," said Morrison.

Chris Kelley may be gone, but his fearless spirit continues to resound in the hearts of his comrades.

"We thank you so much for everything that you've done," said Castillo.

"To his last breath, he was a man of integrity and courage. He was willing to run to the danger and not away," said Morrison.

Kelley served with the department for 7 years. He is responsible for the newly launched bike patrol that debuted in March of this year. His funeral will be held Tuesday at Shoreline Church at 11:00 a.m.