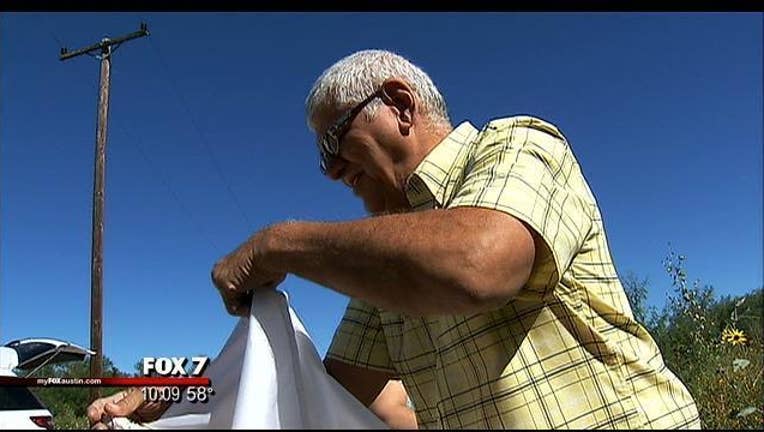 BROOKS COUNTY, Texas - The border security surge in the Rio Grande Valley is now entering its 5th month. With funding to continue the mission still in question, a small humanitarian organization has come up with a controversial approach to help illegal immigrants survive the journey.

For the past several months small white flags have been spotted above the tree line in parts of Brooks County. Printed on each one is a red cross. The international symbol for aid.

The flags are signals to lead thirsty travelers to blue drums filled with water jugs; an oasis set up by Eddie Canales.

"We're about 2 miles in, right and some people die at the road. They make it to the road and they're dead … completely exhausted," said Canales.

Since 2011 nearly 400 bodies of illegal immigrants have been found in this south Texas County. Most died from dehydration. Canales was working in Dallas when he first saw the reports.

"Well you know my first reaction was, we've got to rescue people," said Canales.

He decided to tap into a water barrel idea being used in the California desert. He started setting up stations in August of last year.

With the recent arrival of a nun from Ohio, Sister Pamela Buganski, it's now a two person operation. So far the two have gone through nearly a thousand gallons of donated water.

"We are arguing over, working on, putting a label on the bottles. Commonly when bodies are found, commonly, there is a water jug next to them, and it would give us a hint on whether or not they actually found our water jars," said Sister Pamela

The amount of water being consumed has recently dropped off because the DPS border surge has reduced the number of illegal crossings. It's provided Canales and the sister with time to catch up on a mapping project.

"We would certainly be racing if the phone calls were coming in at the pace they were 6 weeks ago," said Sister Pam.

Red dots pinpoint bodies found in Brooks County. Those locations factor into where water stations are placed, which are marked with blue dots. Canales wants blue barrels throughout south Texas.

"It's working but it could be better. Our endeavor here is to try to institutionalize water stations," said Canales.

Not everyone likes the idea, some resistance has turned to vandalism. We found this road side water station smashed, rammed by a vehicle. It was an easy fix.

"Well it's a Band-Aid approach, and ... these deaths would not be occurring if the Border was securing … we've just been forgotten in the mix," said Susan Kibbie with the South Texans Property Rights Association.

The criminal element that's profiting from human smuggling according to Kibbe is driving people from their homes. She understands that's why some ranchers allow volunteer groups to patrol their land. She would prefer that to be done by professionals.

Securing the border for Kibbe doesn't mean a total shut down. She favors a limited worker visa program that's properly monitored. It's a position Eddie Canales agrees with.

"We are smart, in this country, enough to figure out, how much labor is needed, and regularize the labor so people can come through the regular port of entry," said Canales.

Doing that, Canales believes will reduce the need for cartel backed smugglers as well as border surges by the National Guard and DPS.