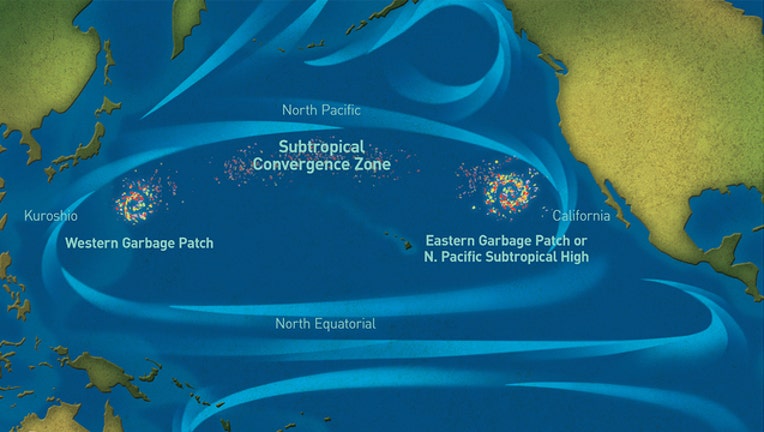 PACIFIC OCEAN (FOX 13) - A floating island of trash in the Pacific Ocean has grown to more than twice the size of Texas, according to a new study, and three times the size of France.

Dubbed as the infamous “Great Pacific Garbage Patch,” a team of researchers from The Ocean Cleanup Foundation surveyed the mass piling up between California and Hawaii. They said the concentrations of microplastics have drastically grown since the 1970s when researchers began monitoring the quantities of tar and plastic, trapped by the ocean currents.

Environmentalists expressed concern over the size of the trash pile. Their study, released in the journal Scientific Reports, found it has nearly doubled in size since then, containing around 80 million kilograms of an estimated 1.8 trillion pieces of plastic.

Researchers gathered 1.2 million samples during an expedition in October 2017, one year after their previous test. They used large nets to scoop the debris and took aerial images to examine the extent of the Great Pacific Garbage Patch. They found large items like bottles, ropes, plastic bags and buoys were the most common objects spotted. Fishing nets accounted for about 46 percent of the trash.

According to the foundation, the larger debris are among the items that represent 92 percent of the plastic mass floating in the region.

“We were surprised by the amount of large plastic objects we encountered", said Dr. Julia Reisser, Chief Scientist of the expeditions in an online statement. "We used to think most of the debris consists of small fragments, but this new analysis shines a new light on the scope of the debris.”

According to NOAA, large amounts of little items can be found in the region, but much of the debris is small pieces of floating plastic that is "not immediately evident to the naked eye."

The foundation is working on a plan to remove much of the fish gear, and expects to launch it in 2019.

Read more about the findings here.