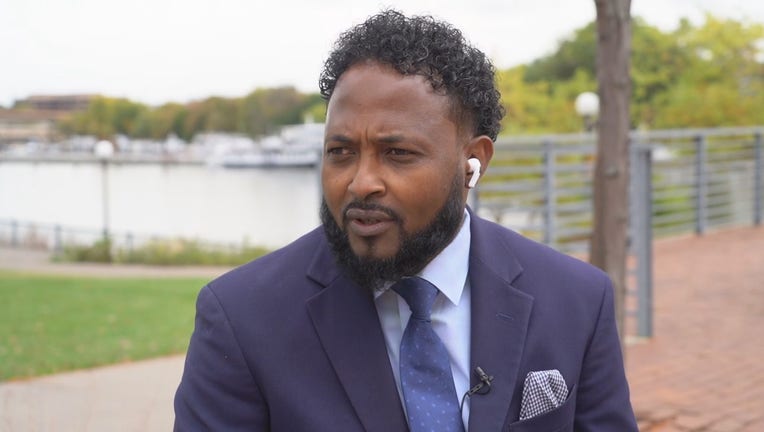 Liban Osman tells the FOX 9 Investigators he was offered $10,000 by community activist Omar Jamal to say he was collecting ballots for Congresswoman Ilhan Omar.

(FOX 9) - Liban Osman is still trying to figure out how he became a symbol of voter fraud in America.

In his first interview, Liban Osman tells the FOX 9 Investigators he was offered $10,000 by community activist Omar Jamal to say he was collecting ballots for Congresswoman Ilhan Omar.

In his first interview, Liban Osman tells the FOX 9 Investigators he was offered $10,000 by community activist Omar Jamal to say he was collecting ballots for Congresswoman Ilhan Omar.

“He was setting me up,” said Liban Osman.

It is clear from the raw video, obtained by FOX 9, that Liban Osman was working for his brother’s campaign.

Liban Osman admits the Project Veritas video footage looks incriminating, but he said the group deliberately left the full context on the cutting room floor. Project Veritas used two separate videos he posted on Snapchat while driving in his car to make it appear as if he was illegally picking up ballots and offering money for votes, he said.

In a video from July, Liban Osman said he was collecting mail in ballots from sick and elderly voters who had requested them through the campaign.

Liban Osman denies that he filled out the ballots or altered them in any way. He said what appears to be open ballots laying on the dash of his car are actually the envelopes the ballots came in. He said voters concerned about identity theft asked him to shred the envelopes.

Despite his boast that he had 300 ballots in the car, he said the actual number was closer to 20.

Because of various court decisions, so-called ‘ballot harvesting’ - collecting more than the statutory limit of three ballots - was permitted during a five-week period this summer, from July 28 to September 4.

An attorney for Project Veritas claims Liban Osman’s Snapchat video collecting mail-in ballots was recorded in early July, making it illegal at the time to harvest more than three ballots.

Liban Osman could not recall the exact date he recorded the video, but said he believed it was in late July.

That video from July is edited with another video from August, when Liban Osman is heard boasting about money in politics. “Money is everything. It’s the key to this world,” he says.

The unedited video reveals the comments were clearly directed at his brother’s 11 opponents in the Ward 6 special election, many of whom were operating shoe-string campaigns.

‘Why are you defending Ilhan Omar?’

Liban Osman said he was approached by community activist Omar Jamal, who is a so-called ‘insider’ for Project Veritas and appears to be their primary source.

Omar Jamal, who he had not met previously, told him Project Veritas would pay him $10,000 to say he was harvesting ballots for Congresswoman Ilhan Omar.

“I told him he was insane and walked away,” Liban Osman said.

“This, to me, is a man who is drowning in the consequences of his own actions, who is trying to grasp at every possible straw to keep himself from going under,” Ede said.

In a second report from Project Veritas, surreptitiously recorded video shows a man receiving $200 in “pocket money” in exchange for his agreement to vote for Ilhan Omar.

James O’Keefe, the founder of Project Veritas, calls it “an explosive piece of tape.”

But two sources tell the FOX 9 Investigators the man is a relative of Omar Jamal, and that during the encounter outside Cedar Riverside Apartments, it is Jamal who is handing the man $200 which was intended for the family of a sick relative in Somalia.

The Project Veritas reports also contend, without evidence, that the cash for ballots scheme is being bank rolled by Lake Street businessman Basim Sabri.

“It’s so un-American, it’s so illegal,” said Sabri, reached at his home in Miami.

Sabri provided the FOX 9 Investigators with a letter from his attorney threatening to sue Project Veritas for defamation if they do not remove the video.

Sabri acknowledged that he is a long-time supporter of Congresswoman Ilhan Omar, and said he has also complained to the DFL about prior voting fraud in Ward 6. “I would never do that. Ever. Never. Because I would be a hypocrite,” said Sabri.

For his part, Omar Jamal has used his appearance in the Project Veritas reports to raise nearly $30,000. In an interview with Somali American TV, he reportedly backtracked on claims he witnessed cash being exchanged for ballots.

President Trump has repeatedly tweeted about the Minnesota voter fraud claims and mentioned it at his campaign stop in Duluth last week.

“What about Omar that she gets caught harvesting,” Trump bellowed at the campaign event shortly before he became sick with COVID-19. “What the hell is going on?”

Congresswoman Ilhan Omar’s campaign has categorically and repeatedly denied any involvement in voting fraud, harvesting ballots, or paying for votes.

A Pattern of Disinformation

The lack of verifiable evidence, allegations of misrepresentation and entrapment, and coordination with conservative causes, has been part of Project Veritas’ method of operation.

The Stanford Internet Observatory reports there is evidence that the voter fraud story was coordinated with the Republican Party and rushed to publication to distract from the New York Times blockbuster on President Trump’s efforts to avoid paying federal income tax.

Days before the publication of the report, James O’Keefe of Project Veritas met with Trump’s Minnesota Campaign Chair, Mike Lindell,  - founder and CEO of My Pillow Inc. - who tweeted out a tease that the report was forthcoming that night.