Three weekends of musical acts are set to take the stage at Summerfest this September.

MILWAUKEE - Summerfest is back in September -- and on Thursday, May 6, we learned the full lineup for the Big Gig. So are you ready to head to the lakefront?

The Summerfest grounds have remained empty for more than a year. In just a few months, the gates will reopen – and there are some new facility features to look out for.

"We've torn this thing down and put it back up, this is the fourth time. We did summer of ‘20 and we tore it down. We did fall of ’20, tore it down. Summer of '21, tore it down and now it's the fall," said Bob Babisch, Summerfest vice president of entertainment.

The 2021 festival will be held over three weekends in September:

Summerfest said it will allow more time for health professionals to vaccinate everyone.

"It's very important for our fans and our staff and our vendors, entertainers, sponsors and everybody to be healthy, happy and have a good time," Babisch said.

More than 100 artists will head to Milwaukee.

"Our phones have been ringing, everybody wants to come perform at the festival so the lineups we’re really excited about it," said Scott Ziel, Summerfest associate booking director.

In addition to the lineup, the American Family Insurance Amphitheater got an upgrade. Plus there's a new stage and Wednesday night "Kick-Off Concerts.

"What we're going to do is send everyone who goes to a Wednesday night show an e-ticket, and they can come to any other night of Summerfest that they want," said Babisch.

"I think it’s just a big step in us feeling good about where we’re going," Ziel said.

To purchase tickets, view the full lineup, and for more information, visit Summerfest.com.  Times and stage locations, as well as additional headliners, will be announced in the coming weeks. 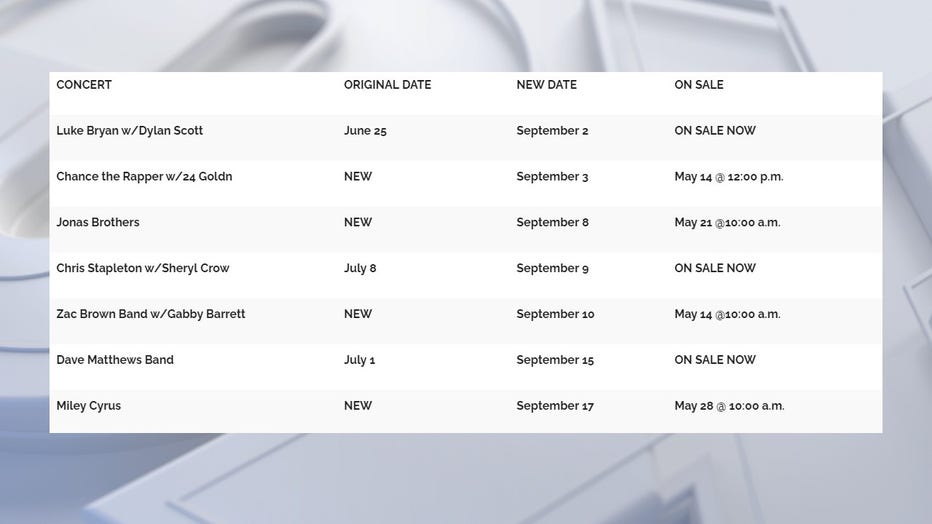 The dates for the Justin Bieber, blink-182, and Guns N’ Roses concerts, are pending. Festival officials are working with artist management to reschedule.