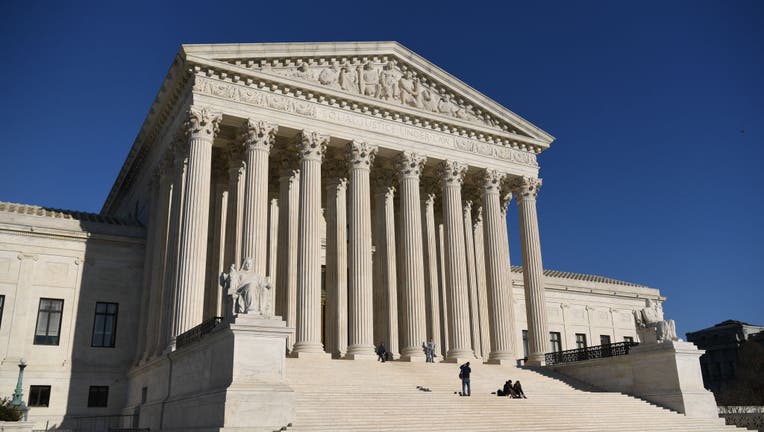 WASHINGTON, DC - MARCH 12: The Supreme Court of the United States of America. The building, a classical Corinthian architectural style, was completed in 1935 with marble mined from Vermont used on the exterior and the four inner courtyards are white

WASHINGTON - The Supreme Court opens a new term with Republicans on the cusp of realizing a dream 50 years in the making, a solid conservative majority that might roll back abortion rights, expand gun rights and shrink the power of government.

Eight justices are getting back to work Monday at a most unusual, politically fraught moment in American history. They’re still mourning the death of their colleague Justice Ruth Bader Ginsburg, the leader of the court’s liberal wing. They’re working in the midst of a pandemic that has forced the court to drastically change the way it conducts business. And the presidential election is less than a month away.

President Donald Trump’s nominee for Ginsburg’s seat, Judge Amy Coney Barrett, could be on the bench in time for one of the term’s biggest cases, post-Election Day arguments in the latest Republican bid to strike down the Affordable Care Act, which provides more than 20 million people with health insurance.

Barrett’s confirmation would cement a 6-3 conservative majority and diminish Chief Justice John Roberts’ ability to moderate the court’s decisions. That’s because conservatives would have five votes even in cases where Roberts might side with the remaining three liberal justices.

“I would guess that on the whole we’re going to see a considerable and perhaps quite rapid shift to the right,” said Orin Kerr, a law professor at the University of California, Berkeley.

The term is so far short on high-profile cases, but that could change quickly because of the prospect of court involvement in lawsuits related to the election. Trump has said he wants Barrett in place soon so that she could be among nine justices, including his other appointees Neil Gorsuch and Brett Kavanaugh, who weigh in on any voting cases. Four years ago, Republicans were content to leave a Supreme Court seat open through the election, even if it meant having an eight-justice court decide any election challenges.

High-court involvement in the election could make this “the most tumultuous and divisive term since the Supreme Court decided Bush v. Gore 20 years ago and effectively determined who would become president of the United States,” said Irv Gornstein, a Georgetown University law professor.

Already this year, the justices have weighed in on election issues in Wisconsin, Alabama, Rhode Island, Florida and Texas. Among the issues: ballot witness requirements and allowing all voters to vote by mail. Pending are pleas from Republicans to reverse decisions extending the deadline for receiving and counting mail-in ballots in the battleground state of Pennsylvania and suspending a ballot witness requirement in South Carolina, where polls find a tight race between Republican Sen. Lindsey Graham and Democratic challenger Jaime Harrison.

The court will begin the term the way it ended the last one, meeting by telephone because of the coronavirus pandemic and allowing the public to listen live to arguments. The biggest change is the absence of Ginsburg, who died of cancer last month at age 87 after 27 years on the bench. When the justices met remotely in May, she already was suffering from a recurrence of pancreatic cancer that was first diagnosed in 2009.

The only time her colleagues, masked and remaining at some distance from each other, gathered in person since March, when the court was closed to the public, was for Ginsburg’s memorial service in the court’s Great Hall.

“I’m still trying to get my head around the idea that Justice Ginsburg won’t be on the bench any longer,” said Donald Verrilli, the Obama administration’s top lawyer before the Supreme Court who will argue in the Affordable Care Act case in November.

The cases being argued over the next two weeks, meanwhile, all had been scheduled for last spring, but were postponed when the virus forced the court to shut down for a time. The most consequential case in October is a dispute between technology giants in which Oracle claims it’s owed $9 billion by Google for using Oracle’s copyrighted code in the development of Google’s Android operating system for smartphones.

The day after the election brings a battle of religious rights and LGBT discrimination from Philadelphia. A social service agency run by the Catholic church sued after the city decided to stop placing children with the agency over its policy of not permitting same-sex couples to serve as foster parents. It could be one of the first cases the court hears with nine justices, if Republicans succeed in confirming Barrett before the election.

In December, the justices will decide whether the House of Representatives can obtain grand jury materials that were part of special counsel Robert Mueller’s investigation of Russian interference in the last election.

It’s among several cases that could go away or at least look very different if Democrat Joe Biden wins the election.

One other possibility next year is a retirement, especially if Biden wins and Democrats retake the Senate. Justice Stephen Breyer is now the court’s oldest justice, at age 82.

Both he and Ginsburg rebuffed suggestions that they retire the last time Democrats controlled the Senate and the White House, in 2014.