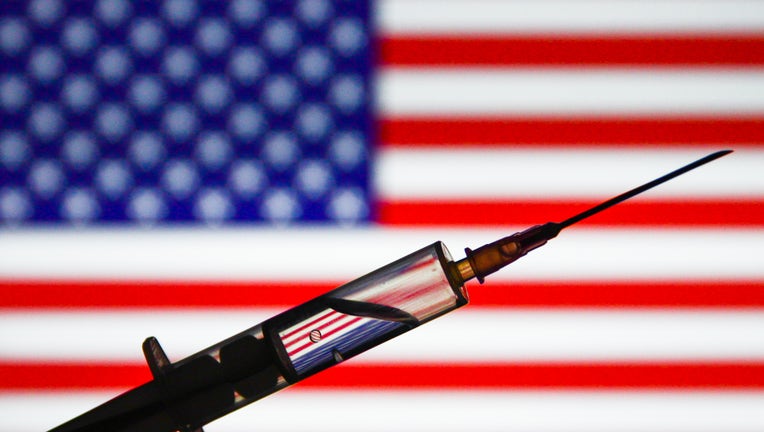 FILE - Illustration of syringe seen with American flag in the background. (Photo illustration by Jakub Porzycki/NurPhoto via Getty Images)

NEW YORK - Roughly 20 percent of Americans say they don’t trust vaccines, according to a new study from the University of Pennsylvania.  The findings are from a survey of around 2,000 adults that was done in 2019, during the largest measles outbreak in the U.S. in 25 years.

The researchers found that belief in a group of negative misperceptions about vaccination:

“There are real implications here for a vaccine for COVID-19,” said lead author Dominik Stecula in a press release. “The negative vaccine beliefs we examined aren’t limited only to the measles, mumps and rubella (MMR) vaccine, but are general attitudes about vaccination. There needs to be an education campaign by public health professionals and journalists, among others, to preemptively correct misinformation and prepare the public for acceptance of a COVID-19 vaccine.”

Overall, however, there remains strong support for vaccines throughout the nation:

“On the one hand, these are big majorities: Well above 50% of Americans support mandatory childhood vaccinations and oppose religious and personal belief exemptions to vaccination,” co-author Ozan Kuru. “Still, we need a stronger consensus in the public to bolster pro-vaccine attitudes and legislation and thus achieve community immunity.”