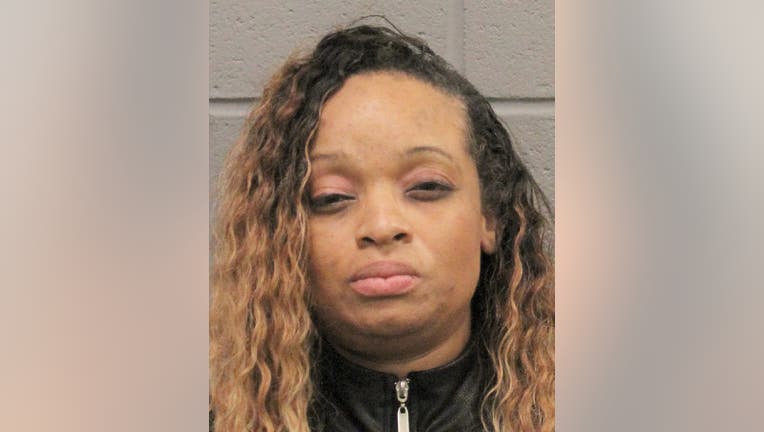 Lavillia Spry, 40, is charged with Intoxication Manslaughter, Failure to Stop and Render Aid and Evading Arrest in the death of a Harris County Sheriff's Office sergeant.

Lavillia Spry, 40, is charged in connection to the death of 45-year-old Sgt. Ramon Gutierrez, a 20-year HCSO veteran.

According to court records, Spry’s bond was set at $150,000 for an intoxication manslaughter charge, $75,000 for failure to stop and render aid involving death, and $50,000 for evading arrest.

Harris County Sherriff's Office Sgt. Ramon Gutierrez, a 20-year veteran, has died after he was struck by a vehicle while conducting an off-duty motorcycle escort, Sheriff Gonzalez said.

Authorities say Sgt. Gutierrez died after he was struck by a vehicle while he was conducting an off-duty motorcycle escort early Monday.

The crash occurred around 12:30 a.m. in the 8900 block of E. Sam Houston Parkway N near Tidwell while Sgt. Gutierrez and others were escorting an oversized load along the service road.

Harris County Sheriff Ed Gonzalez said Sgt. Gutierrez was off his bike, blocking the exit ramp, when a driver drove around his motorcycle and struck the sergeant.

Sgt. Gutierrez was transported to Memorial Hermann via Life Flight, but unfortunately passed away from his injuries.

Detectives say the driver drove away but was caught and arrested by another deputy.

Sgt. Ramon Gutierrez was a 20-year veteran of HCSO

Harris County Sheriff's Office Sgt. Ramon Gutierrez is remembered by family members after he was hit and killed by a suspected drunk driver.

Sgt. Gutierrez was a supervisor in the Vehicular Crimes Division, where he served for the last 13 years.

He previously served as a detention officer, patrol deputy and accident investigator.

"Our entire Sheriff's Office family is grieving the sudden loss of our long-time brother," said Sheriff Gonzalez said Monday. "Sgt. Gutierrez served his community with honor and distinction, and we ask for everyone to lift his family in prayer during this tremendously difficult time."

RELATED: HCSO sergeant killed by suspected drunk driver was to walk daughter down aisle in 2 months

The sergeant leaves behind his wife, who is his high school sweetheart and their three children.

His daughter is scheduled to get married in two months.

"Who’s going to walk her down the aisle now? This is his only daughter. Just like ‘boom’ and he’s gone. They’re torn to pieces. They are torn to pieces. Especially his wife. She was with him ever since they were in high school," said Gutierrez's stepsister Anita Bonilla.