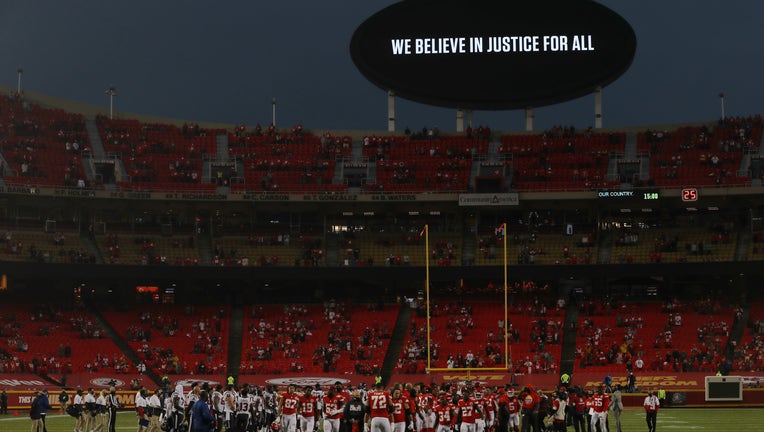 KANSAS CITY, MISSOURI - SEPTEMBER 10: Players from the Kansas City Chiefs and Houston Texans unite in a moment of silence before the start of a game at Arrowhead Stadium on September 10, 2020 in Kansas City, Missouri. (Photo by Jamie Squire/Getty Ima

KANSAS CITY, Mo. - The Houston Texans remained in their locker room during the national anthem before their opener against the Kansas City Chiefs in a coordinated display meant to bring awareness to Black Lives Matter and other social justice initiatives.

The anthem was performed by R&B duo Chloe X Halle from an empty stadium and streamed on the video screens. As soon as it was over, the Texans and their coaching staff ran out of the tunnel in the corner of Arrowhead Stadium.

The Chiefs stood along their sideline during the anthem. Most of them had their hands over their hearts.

The two teams then met at midfield to shake hands while messages such as “We believe Black lives matter” and “It takes all of us” played on the screen. They then lined up from end zone to end zone in a show of solidarity before the coin toss.

The Chiefs won the toss and deferred to the second half.