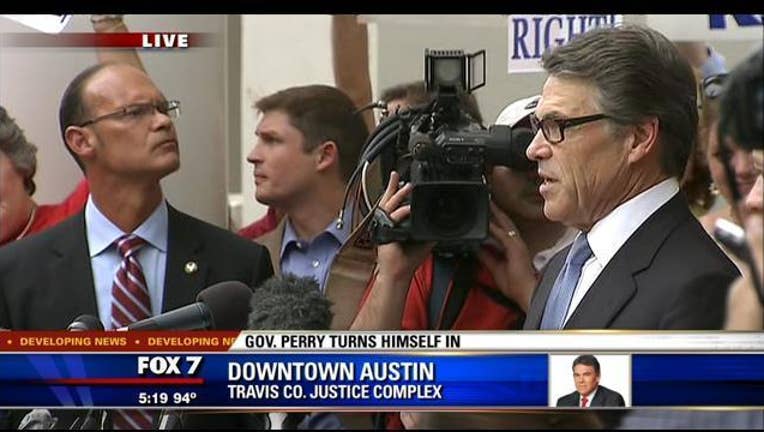 AUSTIN, Texas - Governor Rick Perry surrendered himself to county authorities after being indicted last week by a grand jury. A large crowd was at the Travis County Criminal Justice Complex to meet him. Some were there to shout their support for Governor Perry, while others were hoping they are getting to see the beginning of the end of a politician they have fought for more than a decade.

The circus rolled into Austin this week. While the three rings for these pachyderms and clowns will be inside the Irwin Center, a political circus is taking place a few blocks away. The stage is set in this Travis County Courtroom for the first act on Friday. The symbolic ticket for the show is a court summons issued Monday for the main attraction –Governor Rick Perry.

The jury box could accomplish what opposition groups have not been able to do at the ballot box. Will Hailer with Texas Democrats didn't want to call the situation a pivotal moment for this party but admitted it could pull more people into the political process.

A Travis County Grand Jury indicted the governor last week. He is accused of abiding his power and trying to coerce a public servant. The case involves the conduct of Travis County D.A. Rosemary Lehmberg after she was arrested last year for drunk driving. Perry allegedly threatened to veto funding for a special investigation unit she managed if she didn't resign. Lehmburg refused to go and he pulled the money out if the state budget - ironically, Perry's legal defense bill is also being paid out of the state general fund budget.

In a statement released by Texas Democrats, spokesperson Lisa Paul questioned the use of tax dollars for Perry's defense, asking, "why is that acceptable when he is sitting on $5 million in his campaign account?"

Paul later suggested in the release that it would be better for the Governor to resign than spend tax dollars on his defense and campaigning for Republican candidates in other states.