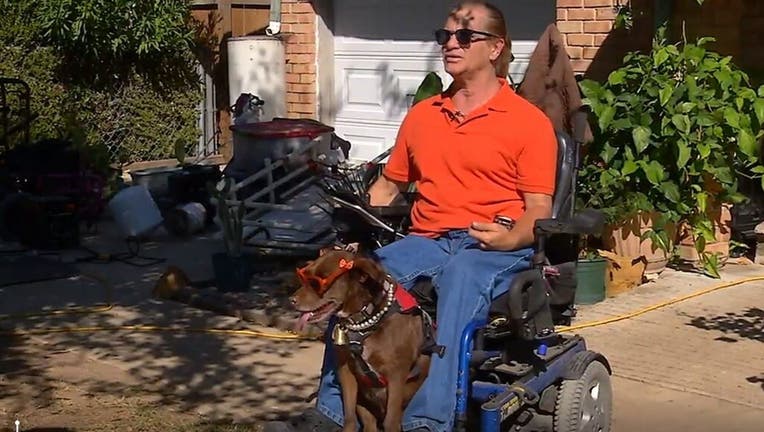 SAN ANTONIO, Texas - A disabled man said he and his service dog were kicked out of a Texas McDonald’s because she smelled bad, according to a report.

Leon Masson, 59, is partially paralyzed from a motorcycle accident and uses a wheelchair, KABB-TV reported. He said he also suffers from seizures and diabetes, and told the news station that he must travel with his service dog Bella for safety reasons.

"Without her, I can’t be anywhere,” Masson said. “If I’m about to have a seizure or diabetic attack, she alerts [me] before they happen."

Masson said he was getting lunch at a San Antonio McDonald's on Roosevelt Avenue recently when the manager asked them to leave, according to KABB.

"The manager said, well, the reason we don’t want you there is because your animal stinks," Masson said.

"My dog smells? She’s very groomed. She gets a bath every week. She’s very well-behaved," he said.

The fast-food restaurant reportedly called the police on him. Masson told the station he showed police Bella’s identification to prove she is a service dog.

McDonald's did not immediately respond to Fox News’ request for comment.

KABB reported that a manager at the fast-food restaurant told the station that several customers called to complain about the dog's odor and would not comment further.