Palm Beach County Fire Rescue released images and video of the crash, which was reported on Nov. 1, 2021, in Jupiter, Florida.

JUPITER, Florida - A pickup truck crashed into a home this week in Florida, ending with the vehicle "completely inside" the residence and sending at least one person to the hospital, officials said.

The resident of the home told local news outlets that she evaded more serious injuries by mere feet.

The crash was reported at about 6 p.m. local time on Monday in the town of Jupiter, located about 20 miles north of West Palm Beach. Responding emergency crews found the vehicle had crashed through the side of a home and come to a stop totally inside the structure.

One person was taken to a local hospital with injuries. Local news outlet FOX 29 reported that the person injured was the male driver of the truck.

Emergency crews shared images and a video of the crash scene on social media, showing what appears to be a Dodge Ram inside the one-story home with heavy damage. 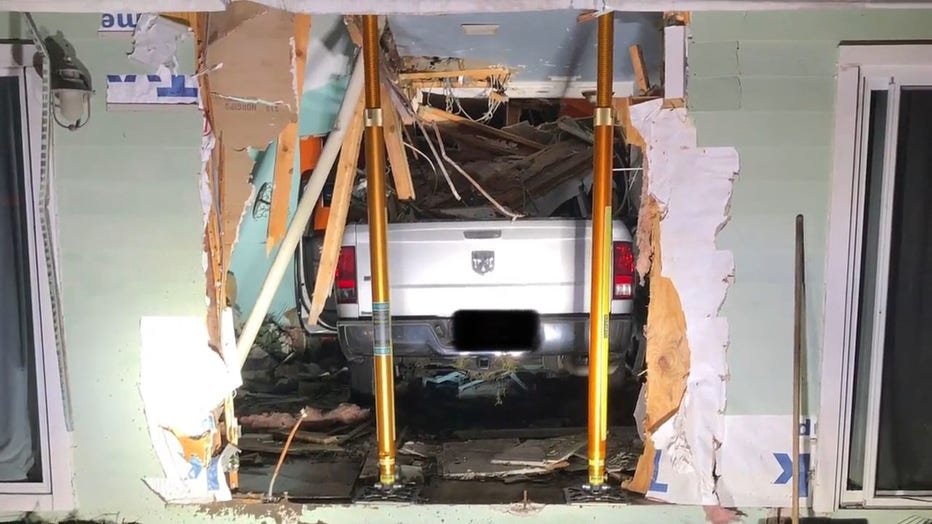 The truck is pictured at the scene on Flagship Circle in Jupiter, Florida, on Nov. 1, 2021. Credit: Palm Beach County Fire Rescue via Storyful

The home’s resident, identified by WPBF-TV as Laura Hanner, said the crash sounded like a train had come through the house. Hanner said she has lived in the home for eight years, and the impact left "smoke and dust everywhere," as well as glass.

"Thank God I am alive," Hanner told the local news station, adding that she only received scratches from the glass. "A couple more feet and I'd be dead."

She added that her bathroom was destroyed from the impact.

The Jupiter Police Department told WPBF-TV that the driver was not intoxicated at the time of the crash, but the cause remained unclear.