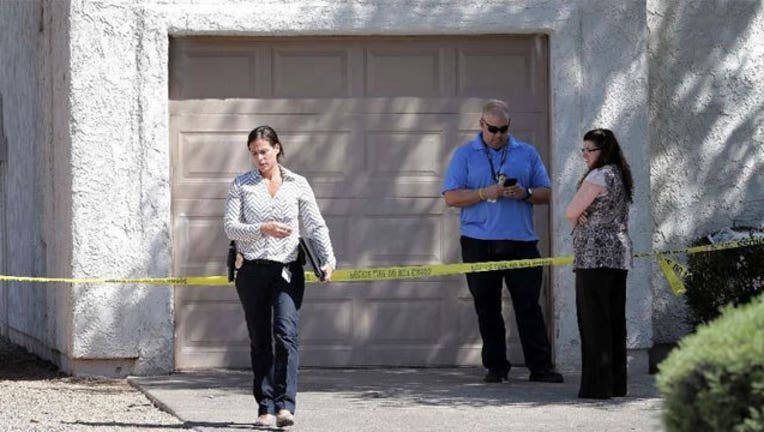 Pheonix police detectives stand outside the home in Pheonix where three boys were killed during a several hour period Wednesday night, The boys' mother was hospitalized in critical condition with self-inflicted stab wounds (AP)

PHOENIX (AP) — The Latest on the killings of three boys at a Phoenix home (all times local):

A Phoenix Police Department spokesman say the bodies of at least two of three young boys found stabbed to death in their home were partially dismembered.

Sgt. Trent Crump did not provide specifies on the dismemberment when he briefed reporters at the scene in a northwest Phoenix neighborhood Thursday.

According to police, the mother stabbed her sons to death and also stabbed herself. She's in critical condition at a hospital.

The bodies of the boys — ages 2 months old and 5 and 8 years old — were found in a closet.

No identities have been released.

Neighbors say they're heartbroken and shocked after a Phoenix woman stabbed her three young sons to death before trying to kill herself in their home.

The bodies of the boys — ages 2 months old and 5 and 8 years old — were found in a closet. Police say the mother also stabbed herself and that she's in critical condition at a hospital.

Next-door neighbor Shelley Severns says she didn't know the family but that her children played with the two older boys, whom she called "cute little things."

Severns says the boy's deaths are tragic and that she's still processing what happened.

Another neighbor says the older boys were nice and playful and that the boys' deaths are heartbreaking.

Police at the scene are waiting for a warrant to search the home as they continue their investigation.

Phoenix police say a mother stabbed and killed her three young sons then badly wounded herself in a suicide attempt. She is hospitalized in critical condition.

Sgt. Trent Crump says the woman's brother called 911 after returning home late Wednesday and finding she had locked him out.

Trump says the brother eventually got into the home and found his sister with self-inflicted stab wounds. She then tried to drown herself in a bathtub while he got towels for her bleeding.

Trump says the woman told officers arriving at the scene that her children were somewhere else. But police then found the boys — ages 2 months old and 5 and 8 years old — dead from stab wounds. At least two of the bodies were in a closet.

No identities were released.