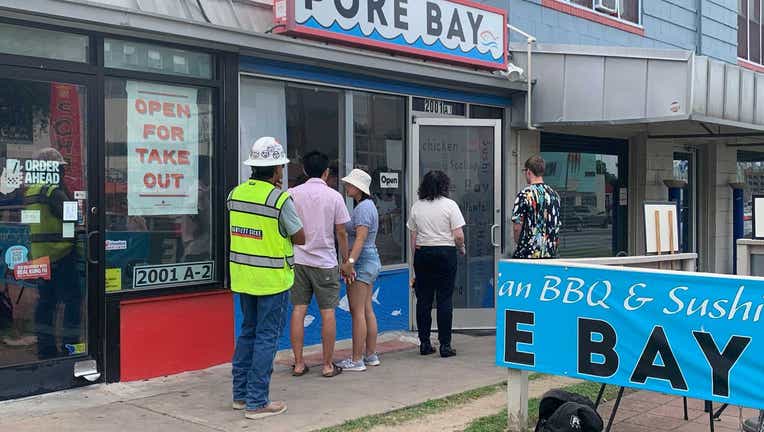 "If you live in Austin or want to support a small business, please watch." A viral TikTok shares a family's emotional story about being forced to close their small business because of UT Austin. (Bridget Spencer)

AUSTIN, Texas - A small business in Austin is being forced to close its doors after UT Austin purchased the plot of land the small business is located on Guadalupe Street to expand the school’s footprint.

According to a viral TikTok by the owner's daughter, the University of Texas at Austin bought the building where her parents are tenants at. The Hawaiian BBQ restaurant, Poke Bay, has been in business near the college campus for five years. Now, they are being forced to close their doors at the end of May.

The daughter of the couple that owns "Poke Bay" on the drag posted a TikTok that went viral, explaining that the building her family's restaurant resides in has been bought by UT. They now have to close their doors, but not before dozens of Austinites stop by to support them one last time.

"If you live in Austin or want to support a small business, please watch," Angelica Song said in the TikTok video. Angelica goes on to explain that it is a really well-loved restaurant within the UT Austin community and that there is a lot of adoration for her parents. She furthers her point by showing multiple positive Yelp reviews where her parents are mentioned.

"The business was super successful before the pandemic, like lines out the door. People always waiting," Angelica explains in the TikTok video. "We actually got multiple offers for people to buy the rights to the restaurant, the name, the recipes, all that stuff. Then the pandemic happened."

Following the pandemic, the conversations about selling the restaurant came to a halt. Angelica's parents, Paul and Priscilla Song, did other things to keep themselves and Poke Bay afloat.

Since then, the restaurant has slowly been getting back on its feet and returning to business as usual. However, that all changed when they learned that their building had been sold and that they would need to vacate the space that had been their restaurant for the last five years.

"UT Austin bought out the building my parents are tenants at," Angelica explains in the TikTok video. Her voice begins to get choked up as she talks about what this means for her parents. "Essentially, they are just kind of kicking them out and not helping them out with relocation, or a new place."

Angelica goes on to point out that UT Austin is one of the biggest schools in Texas with lots of money. "I mean, technically, UT Austin doesn't owe my parents anything but it just sucks that a school that has so much money and resources can't even help my parents out even a little bit."

"Especially when my parents have catered multiple faculty programs, the MBA school," Angelica says in the video. "A lot of the UT Austin faculty members are friends with my parents."

After Angelica posted her video on TikTok, it went viral. Her parents have been seeing a huge influx of customers who want to come and support their business before they shut their doors for good at the end of May.

"I didn’t plan to get emotional but I feel like that a lot of times when we talk about your parents and their hard work," she said.

The University of Texas bought the land the restaurant and three other businesses sit on. The sale actually happened in December. But the issue is getting lots of attention from the social media post. County records show the original landowner sold the property to the McCombs School of Business foundation, which quickly sold to UT Austin.

"It was purchased. We found out after the fact," said Paul Song, owner.

Song said he was visited by campus officials recently.

"This will be our new territory so if you have any issues give us a call. That's when we found out," he said.

The lease for the restaurant ends in October, but he was able to terminate the lease on May 28, after negotiating with the school.

"I don't hate anybody, I don’t blame anybody. It is what it is," said Song.

Ever since word got out via TikTok, people have been flooding the restaurant. A line was outside the building on Wednesday.

"To support a small business is kind of in the values of Austin. To support the small man just working trying to make a living and provide a good product," said Ryan Schlimme, customer.

Song said a lot of sweat and tears went into creating the successful restaurant. They had just started to get things back on track post-pandemic.

"My wife and OI spent numerous nights until 2:00 or 3:00 in the morning just building things, resurfacing, working on electricity. We'll miss it, it was our baby. But it is what it is. God got us here maybe he wants us somewhere else," said Song.

Angelica Song said her parents are empty nesters now, but the restaurant kept them going

"It just really sucks that as soon as they are getting back on their feet this is happening," she said.

The couple said as of now they do not plan on opening another restaurant. Angelica Song said she hopes the school would consider at least providing some sort of payout to her family for the trouble. For now, the Songs will be taking a break and also working on figuring out how to generate another income. We did reach out to UT Austin, which provided this statement:

As the university continues to find ways to serve our students, provide additional housing options, and advance our educational mission, we acknowledge the challenges created by our growth – especially combined with Austin’s growth. We appreciate the role local businesses have in our campus community, and we will engage them in conversations about other university options for relocation.

Tune in to FOX 7 Austin for the latest Central Texas news.