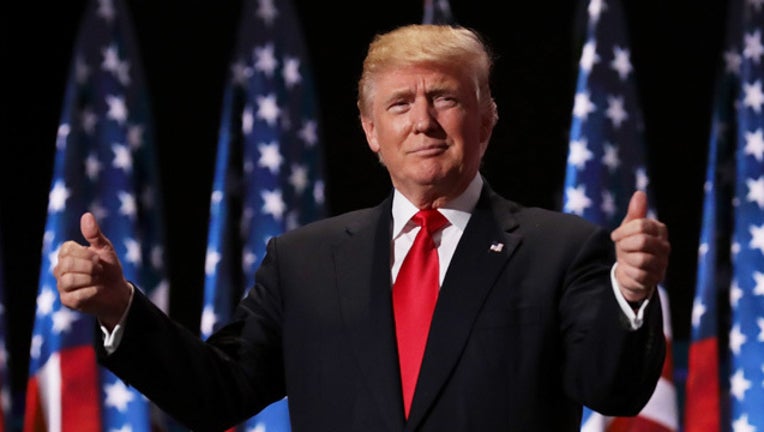 WASHINGTON (AP) - President Donald Trump sought to showcase the federal government's response to Hurricane Harvey in a tweetstorm of his own Sunday, marveling over its size like a TV host and announcing a visit to Texas with the natural disaster only just beginning to take its catastrophic toll.

In a series of tweets, Trump said his administration was handling its responsibilities well and, in a tangential aside, hawked a book on race and crime in America written by a supporter.

"Wow - Now experts are calling #Harvey a once in 500 year flood! We have an all out effort going, and going well!"

He later added: "Even experts have said they've never seen one like this!"

Harvey is the first major natural disaster of Trump's presidency and a significant test for a White House that is often chaotic and rife with infighting. Attention on Harvey from officials, the public and the news media also allows Trump to refocus after a turbulent stretch that included his widely criticized response to the white nationalist protests in Charlottesville, Virginia.

Trump, who spent most of the weekend at the presidential retreat at Camp David, convened a Cabinet meeting by telephone Sunday which included Vice President Mike Pence. He tweeted a promise of a Texas visit "as soon as that trip can be made without causing disruption" - later announced by the White House as Tuesday.

"I've got to tell you, I give FEMA a grade of A+, all the way from the president down," Abbott said. "I've spoken to the president several times, to his Cabinet members, such as secretary of homeland security, such as the administrator of FEMA, such as Tom Price, the secretary of health and human services."

The devastating storm has dumped more than 2 feet of rain, sending thousands of people in Houston to rooftops for rescue and prompting a warning from Federal Emergency Management Agency director Brock Long of a "landmark event" that could require years to get damaged areas back on track.

"All across the board, from the White House to the federal administration to FEMA, they've been very helpful," Abbott said.

Harvey made landfall along the Gulf Coast on Friday night as a Category 4 storm near Corpus Christi, and moved northeast along the Texas coast over Houston. Abbott said he expected heavy rain "for days to come."

The governor commended Trump for being "extremely professional, very helpful" in moving quickly to grant his request Friday for an immediate disaster declaration, which triggers additional federal assistance to aggrieved areas.

Abbott said the focus was on rescue in the Houston area, citing multiple high-level vehicles sent in late Saturday night that were being manned by the National Guard, but that boats and helicopters will be available all across east Texas for swift water rescue. Still, in many areas, Houston officials were reporting flooding so widespread that rescuers were getting too many calls to respond to each one and had to prioritize life-and-death situations.

"We're measuring rain these days not in inches but in feet," Abbott said.

In his tweets, Trump praised Long for "doing a great job" and touted the "great coordination between agencies at all levels of government." He also tweeted Sunday morning about his Cabinet meeting to address Harvey. The Department of Homeland Security, which oversees FEMA, is currently without a secretary.

Trump's tweets had their oddities and non-sequiturs. He also addressed the North America Free Trade agreement, the need for a wall along the U.S.-Mexico border and tax cuts. Trump also found time to promote a book by Milwaukee County, Wisconsin, Sheriff David Clarke, a Trump supporter often on television discussing his conservative views of race, crime and law enforcement.

The White House released a summary of the Cabinet conference call, saying Trump "continued to stress his expectation that all departments and agencies stay fully committed to supporting the Governors of Texas and Louisiana and his number one priority of saving lives."

The Trump administration efforts seek to offer a contrast to President George W. Bush's response to Hurricane Katrina, which hit New Orleans in August 2005 and left more than 1,500 dead. The mismanaged response of Bush's FEMA administrator, Michael Brown, to that hurricane, as well as Bush's praise of Brown for doing a "heck of a job" in the immediate days after, dogged Bush for the rest of his presidency.

On Sunday, Long said FEMA is now "vastly different" than in 2005 and that he has the power he needs to mobilize forces and coordinate staffing. He said the agency was already preparing to handle the aftermath in Texas for the next couple of years.

White House homeland security adviser Tom Bossert defended the early compliments between Trump and Abbott for the response to Harvey, citing the quick action to declare a disaster before landfall to get additional resources in place. But Bossert acknowledged the worst was yet to come, estimating "continued rain, upwards of 30 inches."

"I've been around dozens and dozens of major disasters and hurricanes, hundreds of disasters. I've never seen 30 inches of rain," he said. "We're going to posture ourselves for the long-term care of the medical needy, of the elderly, of the weak and then we'll put ourselves in the position to provide the resources to rebuild and recover," he said.

Abbott spoke on ABC's "This Week" and "Fox News Sunday," Long appeared on CNN's "State of the Union" and NBC's "Meet the Press," and Bossert was on ABC and CBS' "Face the Nation."