A West Hollywood poll worker who went viral for wearing "Trump 2020" gear has been relieved of his duties.

LOS ANGELES - A West Hollywood poll worker who went viral for wearing "Trump 2020" gear has been relieved of his duties.

A Twitter user, @Frank_K_Santoyo, shared a photo on social media showing a man clearly showing support for Former President Donald Trump by wearing a "Trump 2020 hat" and a red t-shirt saying "Where's Hunter? Trump 2020." The man was also seen operating the poll center's tablet, later confirmed by Los Angeles County on social media that he was an election worker.

The viral photo prompted the Los Angeles County Registrar-Recorder/County Clerk to pull the poll worker from the job. 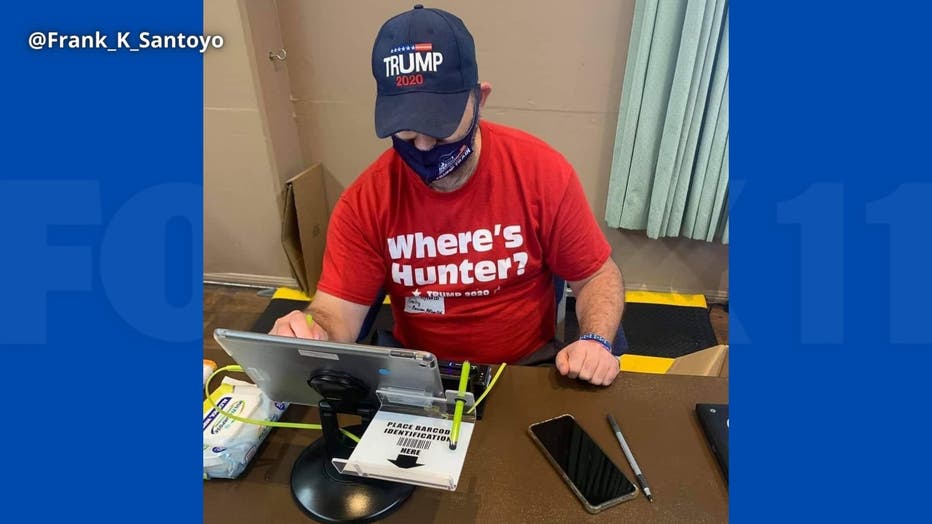 "The election worker was contacted and advised that the attire was inappropriate and unacceptable. Based on his response and reports that other workers had previously counseled him on this, he was released and is no longer working at the vote center," the county clerk's office tweeted Tuesday.

The county clerk's office claims other workers counseled the worker on his outfit choices. The man who took the photo told FOX 11 the picture was taken at Plummer Park in West Hollywood a little before 6:15 p.m. Monday.

Tuesday marks the last day for Californians to cast ballots at a poll center or send their vote-by-mail ballots in the gubernatorial recall election. The recall ballot asks Californians if Governor Gavin Newsom should be recalled from office, and if so, who should take his spot?

Tuesday is the final day for California voters to return their vote-by-mail ballots or cast ballots at voting centers in the gubernatorial recall election.