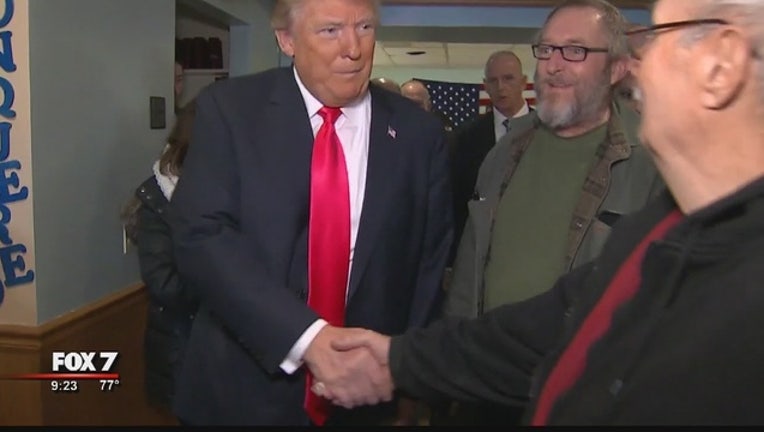 BRIARCLIFF MANOR, N.Y. (AP) — Donald Trump labored to convince fellow Republicans that he can broaden his appeal and move beyond controversy, tamping down his caustic attacks and divisive remarks in a noticeably muted speech after his final presidential primary wins.

"I understand the responsibility of carrying the mantle" of the Republican Party, Trump said Tuesday night, reading from a teleprompter to supporters gathered at one of his golf courses. "I will never, ever let you down." He added: "I will make you proud of our party and our movement."

Trump's pitch came on one of the toughest days of his unpredictable campaign, as top Republican leaders and donors denounced as racist and troubling his comments about a federal judge's ethnicity.

And it came as Democrat Hillary Clinton, at a rally in Brooklyn, claimed her place as the country's first major party female presidential nominee by quickly invoking Trump as a contrast. "This election is about who we are as a nation. It's about millions of Americans coming together to say, 'We are better than this.' "

While Trump sought to portray himself as a unifier during his evening speech — drawing plaudits from Republican Party Chairman Reince Priebus for taking "exactly the right approach" — hours earlier he continued to be strikingly defiant.

In an interview on Fox News, Trump said Republicans angry at him should "get over it." In his statement on the matter earlier, he said he'd been "misconstrued" and that he was "justified in questioning" treatment by the judge.

The controversy erupted because Trump had repeatedly said U.S. District Judge Gonzalo Curiel could not preside fairly over a case involving Trump University because of his Mexican heritage.

Many Republicans didn't see it that way, and the desire of his party to unify behind him looked at risk of unraveling.

House Speaker Paul Ryan described what Trump said as the "textbook definition of a racist comment." Soon after, a GOP senator who had previously indicated support for Trump withdrew his backing.

"I have concluded that Donald Trump has not demonstrated the temperament necessary to assume the greatest office in the world," Sen. Mark Kirk of Illinois, who is in a competitive re-election race, said in a statement.

Trump's comments about the judge's ethnicity, "in context with past attacks on Hispanics, women and the disabled like me," prompted Kirk to withdraw his support for his party's nominee, he said, though he also added he does not support Clinton.

Kirk suffered a stroke in 2012 and often uses a wheelchair. His disavowal in the wake of Trump's comments about the judge — the first of any leading Republican — followed the debut of a hard-hitting, multimillion-dollar television ad from Clinton allies. It reminded voters in battleground states that Trump had mocked a disabled reporter.

Ron Weiser, one of the recently named top fundraisers for Trump and the Republican Party, said the nominee's attacks on Curiel are "obviously making it more difficult" to raise money for Trump, whose opponent could have $1 billion at her disposal.

Stanley Hubbard, a Minnesota broadcast company billionaire who recently gave $100,000 to a pro-Trump group, put it this way: "It's ridiculous. He's out of line. You don't attack a federal judge, and you certainly don't attack him on the heritage of his parents. It's totally off the wall, and I don't even have words to explain it."

Only his fear of Clinton picking Supreme Court justices is enough to keep him giving money to Trump, Hubbard said.

The desire to win in the fall served as a way for even those denouncing Trump to explain their continued backing of him.

Sen. Tim Scott, R-S.C., the only black Republican senator, called Trump's comments on the judge "racially toxic" yet said, "He needs to get on to the general election and we need to win." Ryan, too, said he would still support Trump.

Democrats questioned how Republicans could condemn Trump's comments while seeking to put him in the White House.

"If Republicans believe that a man who believes in religious and ethnic tests for federal judges is fit to be president of the United States, they must explain why this is an acceptable position," said Senate Minority Leader Harry Reid of Nevada.

Clinton, in her Tuesday speech, called Trump "temperamentally unfit to be president and commander in chief." Later, she said, "He wants to win by stoking fear and rubbing salt in wounds and reminding us daily just how great he is."

Mica Mosbacher, a Texas and New York fundraiser who backed Trump as soon as her preferred candidate Ted Cruz left the race, said her email has been "blowing up over the past few days" with notes from Republicans concerned about Trump's comments. "It's giving some of the donors heartburn, for sure," she said.

She said she has been pushing back, arguing that while she — and many others — "would personally not bring up a person's origin, that's just Trump's style. He's his own hatchet man. What you see is what you get. His way is to throw bombs and spark a discussion."

Trump gave a similar assessment of himself in his speech Tuesday.

While he said his "preference always is peace," he pledged that he would not shrink from a fight.

"I have not backed down, and I will never, ever back down," he said. "And I'm not a politician fighting. I'm me."