WASHINGTON (AP) - Following the announcement that President Donald Trump and first lady Melania Trump tested positive for the novel coronavirus, health officials in states where Trump held recent public events are urging attendees to get tested for the virus.

Shortly after Trump’s diagnosis, Minnesota health officials put out an announcement urging people who attended events associated with President Donald Trump’s visit this week to consider being tested for the coronavirus.

The Minnesota Department of Health on Friday urged anyone with symptoms to be tested right away. Trump announced early Friday morning that he had been diagnosed with COVID-19, just two days after he held a campaign rally in Duluth and a fundraiser in a Minneapolis suburb.

The health department said community transmission was high in St. Louis County — which includes Duluth — before the rally, and attendees may have been infectious without realizing it. 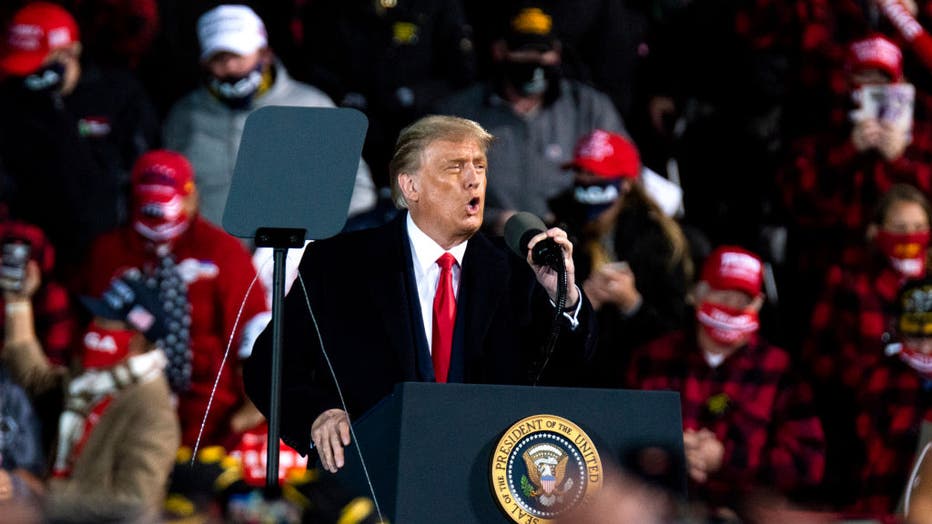 President Donald Trump speaks during a campaign rally at the Duluth International Airport on September 30, 2020 in Duluth, Minnesota. (Photo by Stephen Maturen/Getty Images)

The Pennsylvania Department of Health is also encouraging people who were at President Donald Trump’s campaign rally at Harrisburg International Airport on Saturday to get tested if they are feeling sick.

The department is asking people to download the COVID Alert PA phone app if they do test positive to anonymously alert people they may have come in contact with.

Thousands attended the outdoor rally, held hours after the president introduced his Supreme Court nominee, Amy Coney Barrett, from the Rose Garden at the White House. Those at the rally were required to pass through a security checkpoint and get their temperatures taken.

Trump’s campaign manager said all campaign events involving the president and his family will either be turned into virtual events or postponed until further notice.

“All previously announced campaign events involving the President’s participation are in the process of being moved to virtual events or are being temporarily postponed. In addition, previously announced events involving members of the First Family are also being temporarily postponed. All other campaign events will be considered on a case-by-case basis and we will make any relevant announcements in the days ahead. Vice President Mike Pence, who has tested negative for COVID-19, plans on resuming his scheduled campaign events. Any further information about the President will come from the White House,” Stepien said.

The announcement comes after Trump tweeted Friday that he and his wife tested positive for the coronavirus.