WASHINGTON - President Donald Trump on Tuesday said he is planning to attend next week’s debate with Democrat Joe Biden less than 24 hours after being discharged from the hospital for treatment of COVID-19.

“I am looking forward to the debate on the evening of Thursday, October 15th in Miami. It will be great,” Trump tweeted.

The Trump campaign’s communications director, Tim Murtaugh, also said in a statement that the president “intends to participate in the debate in person.”

Trump, who is still contagious with the virus, left Walter Reed National Military Medical Center on Monday evening to continue treatment at the White House — where there is a team of doctors on call with 24-hour monitoring. 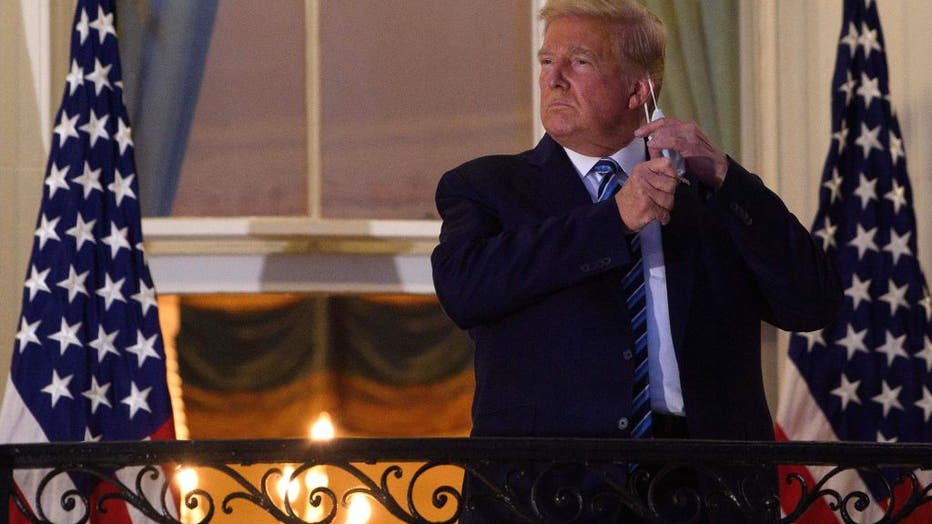 President Donald Trump takes off his face mask as he arrives at the White House upon his return from Walter Reed Medical Center, where he underwent treatment for COVID-19, in Washington, D.C., on Oct. 5, 2020. (Photo by NICHOLAS KAMM/AFP via Getty Im

Trump's doctors provided an update on his condition Tuesday afternoon, saying he had “a restful first night at home and today he reports no symptoms.”

“Vital signs and physical exam remain stable, with an ambulatory oxygen saturation level of 95-97%,” the update read in part.

Prior to Trump’s discharge, his physician, Navy Cmdr. Sean Conley, said the president would not be fully “out of the woods” for another week.

But Trump’s remarks about the second presidential debate sparked some concern, as the date of the event could still pose a public health risk. Guidance from the Centers for Disease Control and Prevention states that the best evidence is that people with mild to moderate COVID-19 may be contagious for up to 10 days after symptoms first appear, while some people with more severe disease likely are contagious for up to 20 days.

Trump first revealed his diagnosis early on Oct. 2 and has had symptoms since that time. But the White House has not said when the president last tested negative or clarified the timeline around his COVID-19 diagnosis.

The Commission on Presidential Debates, a nonprofit group that sponsors the debates, did not immediately respond to a request for comment.

Trump also repeated his previous comparisons of COVID-19 to the seasonal flu on Tuesday.

“Many people every year, sometimes over 100,000, and despite the Vaccine, die from the Flu,” he tweeted. “Are we going to close down our Country? No, we have learned to live with it, just like we are learning to live with Covid, in most populations far less lethal!!!”

But COVID-19 has already proven to be a more potent killer, particularly among older populations, than seasonal flu, and has shown indications of having long-term impacts on the health of younger people it infects.

More than 210,000 Americans have died from the COVID-19, and nearly 7.5 million have been infected, according to data compiled Oct. 6 from Johns Hopkins University.