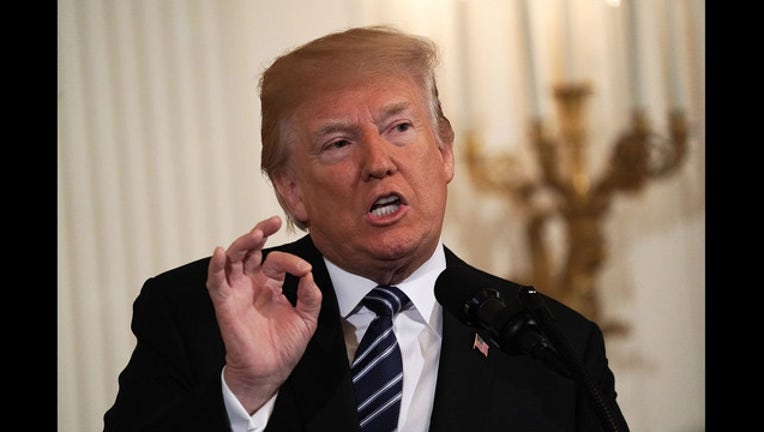 President Donald Trump said Sunday that he will "demand" this week that the Justice Department open an investigaton into whether the FBI infiltrated his presidential campaign. (Photo by Alex Wong/Getty Images)

WASHINGTON (AP) - President Donald Trump said Sunday that he will "demand" this week that the Justice Department open an investigation into whether the FBI infiltrated his presidential campaign for political purposes and whether any demands or requests for such action originated with the Obama administration.

Trump tweeted: "I hereby demand, and will do so officially tomorrow, that the Department of Justice look into whether or not the FBI/DOJ infiltrated or surveilled the Trump Campaign for Political Purposes - and if any such demands or requests were made by people within the Obama Administration!"

Trump has been promoting a theory circulating in conservative circles about a possible FBI spy on his 2016 campaign, though his attorney has cast doubt on it.

Rudy Giuliani, the attorney representing Trump in the ongoing special counsel's investigation into Russian meddling in the presidential election, said in a television interview last week that neither he nor the president knows for certain if there was a spy on the campaign. Giuliani said they had been told of "some kind of infiltration."

In any event, the Justice Department's internal watchdog is already examining Republican complaints of FBI misconduct in the early stages of the Russia investigation.

Inspector General Michael E. Horowitz announced an investigation in March at the request of Attorney General Jeff Sessions and congressional Republicans. Sessions and the lawmakers had urged Horowitz to review whether FBI and Justice Department officials abused their surveillance powers by using information compiled by Christopher Steele, a former British spy, and paid for by Democrats as part of the basis to justify monitoring Carter Page, a former campaign adviser to Trump.

Horowitz said his office will look at those claims as well as communications between Steele and DOJ and FBI officials.

Trump did not elaborate on his "demand," one of a series of tweets he sent throughout the day Sunday. On Saturday, Trump tweeted, "If the FBI or DOJ was infiltrating a campaign for the benefit of another campaign, that is a really big deal." He said only the release or review of documents the House Intelligence Committee is seeking from the Justice Department "can give conclusive answers."

Trump last week accused the Justice Department of trying to frame him by planting a spy in his 2016 campaign. Trump quoted Fox Business anchor David Asman and tweeted Friday: "Apparently the DOJ put a Spy in the Trump Campaign. This has never been done before and by any means necessary, they are out to frame Donald Trump for crimes he didn't commit."

But when asked whether there was an informant on the campaign, Giuliani told CNN, "I don't know for sure, nor does the president, if there really was one," though he said they have long been told there was "some kind of infiltration."

Earlier this month, the National Review raised the question of a possible FBI spy in Trump's campaign. The article cites work by Republican Rep. Devin Nunes of California, an ardent Trump supporter and chairman of the House Intelligence Committee, who has demanded information on an FBI source in the Russia investigation.

Opponents of Nunes' request have stressed the need to protect sources and methods.

The New York Times reported separately last week that at least one government informant met several times with Page and George Papadopoulos, another former foreign policy adviser on Trump's campaign. The Times reported, citing current and former FBI officials, that the informant talked to Page and Papadopoulos because they had suspicious contacts linked to Russia.

Papadopoulos was charged last year in special counsel Robert Mueller's investigation and pleaded guilty to lying to the FBI. He has agreed to cooperate with prosecutors.