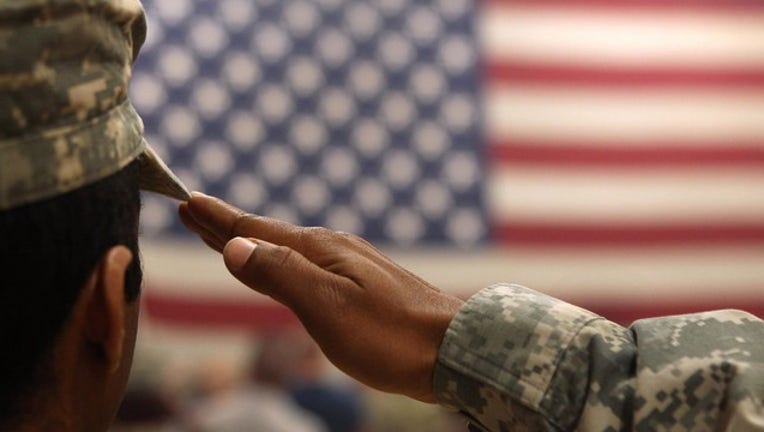 FORT CARSON, CO - JUNE 15: A soldier salutes the flag during a welcome home ceremony for troops arriving from Afghanistan on June 15, 2011 to Fort Carson, Colorado. (Photo by John Moore/Getty Images)

WASHINGTON - The Trump administration is expected to cut the number of U.S. troops in Afghanistan almost in half to 2,500 by Jan. 15, U.S. officials said Monday. The order would stop short of outgoing President Donald Trump’s goal to have all troops withdrawn by the end of the year, which had faced opposition from military and diplomatic advisers.

The Pentagon also expects to cut the number of troops in Iraq to 2,500, a reduction of more than 500. The decisions come as no surprise, following Trump’s shakeup of the Pentagon leadership last week in which he installed loyalists who share his frustration with the continued troop presence in the war zones. The cuts give Trump an accomplishment in his final weeks in office even as he refuses to concede his election loss to Democrat Joe Biden.

The officials said military leaders were told over the weekend about the planned withdrawals and an executive order is in the works but has not yet been delivered to commanders. The officials spoke on condition of anonymity to discuss internal deliberations. There are between 4,500-5,000 troops in Afghanistan now, and more than 3,000 in Iraq.

Under the planned order, the troop cuts would be completed just five days before Biden takes office, leaving him with a smaller military footprint in the two key war zones. Military commanders have expressed less concern about pulling more troops from Iraq, where the Iraqi forces are better able to maintain their nation's security.

RELATED: Trump says remaining US troops in Afghanistan should be ‘home by Christmas’

Trump's new Pentagon chief, Christopher Miller, hinted at the troop withdrawals over the weekend in a carefully worded message to the force that suggested compromise.

He said that “we remain committed to finishing the war that Al Qaida brought to our shores in 2001.” And he warned that “we must avoid our past strategic error of failing to see the fight through to the finish.”

But he also made it clear that “all wars must end.”

“This fight has been long, our sacrifices have been enormous. and many are weary of war - I’m one of them,” he said. ”Ending wars requires compromise and partnership. We met the challenge; we gave it our all. Now, it’s time to come home.”

The accelerated withdrawal, however, goes against the longstanding advice from Trump’s military leadership, including Marine Gen. Frank McKenzie, top U.S. commander for the Middle East. But officials suggested this week that commanders will be able to live with the partial pullout, which allows them to keep counterterrorism troops in Afghanistan and gives more time to remove critical equipment.

McKenzie and others have repeatedly argued that a hasty withdrawal could undercut negotiations to finalize ongoing peace negotiations between the Taliban and representatives of Afghan society, including the current Afghan government. And they also warn that U.S. forces should remain in the country to keep Islamic State militants in check.

Biden has sounded less absolute about troop withdrawal. He has said some troops could stay in Afghanistan to focus on the counterterrorism mission. In response to a questionnaire before the election, he said, “Americans are rightly weary of our longest war; I am, too. But we must end the war responsibly, in a manner that ensures we both guard against threats to our homeland and never have to go back."

The expected order adds to what has been a litany of muddled White House and Pentagon messages on troops withdrawals from both Afghanistan and Iraq, only exacerbating what has been an emotional roller coaster for the troops and their families.

The Pentagon was already on track to cut troops levels in Afghanistan to about 4,500 by mid-November. U.S. military leaders have consistently said that going below that number must be based on conditions on the ground, including a measurable reduction in attacks by the Taliban on Afghan troops. And they insist they have not seen that yet.

America’s exit from Afghanistan after 19 years was laid out in a February agreement Washington reached with the Taliban. That agreement said U.S. troops would be out of Afghanistan in 18 months, provided the Taliban honored a commitment to fight terrorist groups, with most attention seemingly focused on the Islamic State group’s affiliate in the country.

Military officials also have warned that there is a large amount of critical, classified equipment at bases in Afghanistan that needs to be removed, but it will take more time. And they also say that any full U.S. withdrawal needs to be coordinated with other coalition allies that have troops in the country.

The White House, however, issued a confusing series of statements about Afghanistan over the past month. Trump on Oct. 7 tweeted that “we should have the small remaining number of our BRAVE Men and Women serving in Afghanistan home by Christmas.” When asked about those comments, Robert O’Brien, his national security adviser, said Trump was just expressing a hope.

O’Brien, meanwhile, has said the number of troops in Afghanistan would drop to 2,500 by early next year. At the time, defense officials said they had not gotten orders to cut troops to 2,500. And they warned that withdrawing troops quickly could remove some incentive for the struggling peace talks.

According to the February agreement, the U.S. troop withdrawal next year is tied to the Taliban’s commitment to fight terror groups — such as the Islamic State — in the county, and is not linked to successful negotiations between the Taliban and government. The Islamic State group is seen as extremely dangerous and intent on targeting America and other Western interests.

The Taliban and Afghan government negotiators have been meeting for over a month in the Middle Eastern state of Qatar with little sign of progress. The Taliban, meanwhile, have staged near-daily deadly attacks against Afghan forces.

The U.S. invaded Afghanistan in late 2001, in the aftermath of the Sept. 11 terrorist attacks on America. The war has dragged on through three presidential administrations, despite repeated efforts to defeat terror groups, stabilize and root out corruption in the government and train Afghan forces to secure their own country so that the U.S.-led coalition can safely leave.