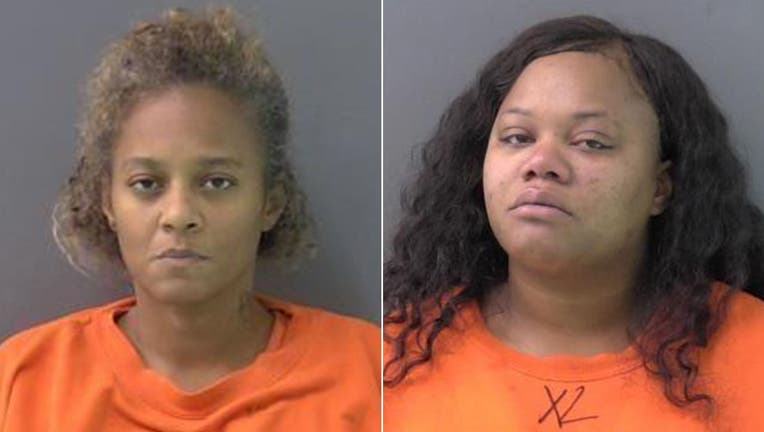 Chonda Edmond, left, and Kyhirah Clemons have been charged with injury to a child. (Killeen Police Department)

KILLEEN, Texas - Two women have been arrested in Texas after allegedly beating a 12-year-old student with what “looked like baseball bats” as retaliation for an argument the girl reportedly had with a classmate to whom the women were related.

Kyhirah Clemons and Chonda Edmond were taken into custody Saturday following the alleged incident at Killeen High School on June 12, KWTX reported. They both are facing a felony charge of injury to a child and are being held on $100,000 bond.

The station, citing an arrest affidavit, says the victim told police she got into a dispute that day with a student at Killeen Middle School. It added that when the student’s mother, identified in the affidavit as Edmond, came to pick the classmate up, an altercation ensued.

The girl then went to Killeen High School later that day to hang out with friends – only to be confronted by Edmond again and a woman who claimed to be the aunt of the classmate, KWTX reported, citing the document.

The victim told investigators that “both adult females had objects that looked like baseball bats and began to strike her with the objects,” the affidavit reportedly says. She also stated that she lost consciousness during the alleged attack and by the time she woke up again, “she was still being struck while on the ground,” according to KWTX.

Surveillance video reviewed by officers “depicts parts of the reported events” and shows “individuals arriving at Killeen High School in an SUV and approaching (the victim) with club-like objects in their hands,” the affidavit reportedly says.

Edmond, in an interview with police, is said to have described Clemons as "a close friend that she refers to as a sister and is her only family member that lives locally.” Officers who responded to the scene of the alleged attack on June 12 found the victim lying on the ground, KWTX reported.

The extent of her injuries is unclear.