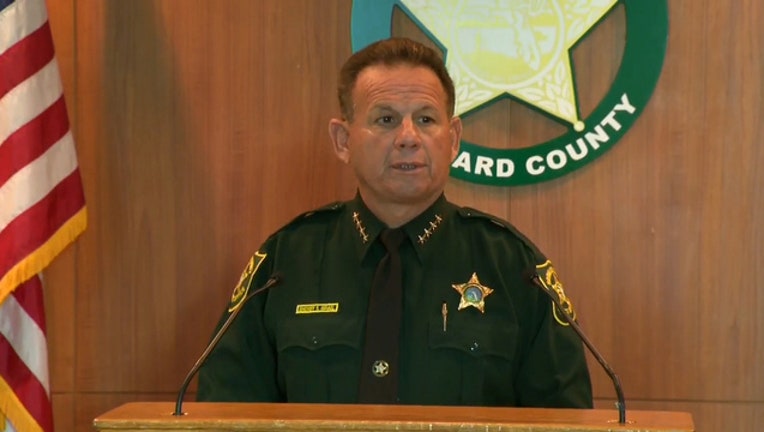 PLANTATION, Fla. (AP) - The sheriff whose deputies responded to the Florida high school massacre received an overwhelming vote of no-confidence Thursday from the union that represents about half his sworn personnel, with the union's president calling him "a liar" for saying the poll was a union tactic to extort raises.

The Broward Sheriff's Office Deputies Association members voted 534-94 on a symbolic measure expressing no confidence in Sheriff Scott Israel, who denounced the vote and called it "inconsequential."

The union's leadership criticized Israel's handling of the February shooting at Marjory Stoneman Douglas High School that left 14 students and three staff members dead, saying he should he should not have put the full blame on Deputy Scot Peterson, the school's resource officer.

The sheriff's office has been criticized for not arresting or getting a psychiatric commitment for suspect Nikolas Cruz, a 19-year-old former Stoneman Douglas student. The office received nearly 20 calls about him in the years leading up to the shooting, mostly from his late mother about his behavior, but the sheriff's office said there was nothing he could be arrested for.

President Jeff Bell mocked Israel during a Thursday press conference, repeatedly using the same "amazing leadership" phrase that Israel used in a television interview days after the shooting to describe his handling of the shooting. His union represents about 1,300 deputies and sergeants. Unions representing jail guards and other employees support Israel.

"We no longer have confidence in your leadership, and it is time for change in Broward County," Bell said. "It is time now for the sheriff to listen to (the union's) membership and start listening to the citizens of Broward County and start changing your policies that are absolutely failing. We ask you to change your leadership to make it somewhat resemble amazing."

Israel, who easily won re-election to a second four-year term in 2016, said in a statement, "I will not be distracted from my duties by this inconsequential IUPA union vote, which was designed to extort a 6.5 percent pay raise from this agency. Those who purportedly voted in this straw ballot reflect only a small number of the 5,400 BSO employees. The unions representing the vast majority of our employees solidly support the leadership of this agency."

Bell said the union is asking for a 4.5 percent raise when its three-year contract expires in September and has never asked for a 6.5 percent increase.

"The sheriff is a complete liar, capital letters on that," Bell said. "This has never been about a contract. This has been about longstanding bad policies, his failure at leadership. ... He wants to blame everyone for his problems; the NRA (National Rifle Association), for the gun problems. He blames the school board; he blames us. It is everybody else's fault besides the sheriff. That is not an amazing leader."

Bell stopped just short of calling for Gov. Rick Scott to suspend Israel. Scott in his seven years in office has only suspended elected officials if they have been charged with a crime and rejected calls from some legislators to suspend Israel after the shooting.

Scott spokesman John Tupps said the governor is waiting for the Florida Department of Law Enforcement to complete its investigation of the Broward Sheriff's Office's handling of the shooting before making any decisions. He will then "hold people accountable."

Cruz's lawyers have conceded he is the shooter and say he will plead guilty in exchange for a life sentence. Prosecutors say they will seek the death penalty.