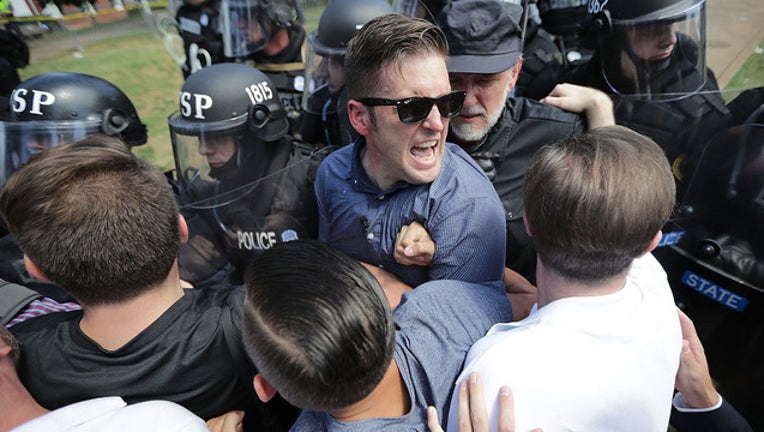 GAINESVILLE, Fla. (AP) - The University of Florida on Wednesday denied a request by a group headed by white nationalist Richard Spencer to rent space on the campus for a September event and his supporters vowed to file a court challenge.

UF President W. Kent Fuchs said in a statement that the decision was made after assessing risks to the campus, community and law enforcement following last weekend's deadly violence during a white nationalist rally in Charlottesville, Virginia.

Members of the National Policy Institute, which is headed by Spencer, had contacted the university for plans to rent space on the campus in Gainesville, Florida on Sept. 12.

"I find the racist rhetoric of Richard Spencer and white nationalism repugnant and counter to everything the university and this nation stands for," Fuchs' statement said.

Fuchs said UF is dedicated to free speech and public discourse, but the First Amendment does not require risk of imminent violence to students.

Spencer did not immediately return a text seeking comment. But Cameron Padgett, a Georgia resident affiliated with Spencer's group who was coordinating the campus event in Gainesville, told The AP he would be filing a legal challenge.

"I signed an agreement and sent it in to the event coordinator," Padgett said. "I don't know who's advising them on why they think they can do this."

Padgett's challenge filed after Auburn University tried to ban Spencer's appearance there in April was successful, and a federal judge paved the way for Spencer to speak. Several hundred people attended the event and three people were arrested outside the building during clashes between Spencer's supporters and his opponents.

Janine Sikes, a university spokeswoman, said it was the first time that she could recall the university denying someone to speak due to fears of violence or hate speech.

"I can't say for the last 100 years, but we're not aware of ever doing this in recent history."

The move comes after Texas A&M University canceled a white nationalist protest featuring Spencer that was planned in September on that campus due to security concerns.

Spencer, a leading figure in the white nationalist movement, has popularized the term "alt-right" to describe a fringe movement that is a mix of white nationalist, white supremacist, anti-Semitic and anti-immigration beliefs. Spencer has advocated for an "ethno-state" that would be a "safe space" for white people.