What's behind the sky-high home prices in many US cities?

Mark Zandi, the chief economist at Moody’s Analytics, explains why homes in so many cities across the U.S. are overvalued and how long this could last.

Nearly every community in the U.S. is feeling the effects of an overvalued housing market, particularly in some smaller cities in states like Idaho and Tennessee where many sought out a new home during the pandemic.

Data provided to FOX Television Stations by Moody’s Analytics shows homes in 97% of U.S. metro areas are overpriced, with the most overvalued markets seeing homes priced at 50% to 70% more than they’re worth. This overvaluation is compared to the historical norms of local household incomes, rents, and construction costs.

And while economists aren’t predicting a crash, they don’t expect these overvaluations will last. Mark Zandi, the chief economist at Moody’s Analytics, noted how many of these markets were "juiced up" because of previously low mortgage rates and the implementation of remote work during the COVID-19 pandemic.

Zandi predicted that prices will start falling within the next few of years — but buyers will need to be patient.

"I wouldn’t be surprised if some areas [begin to see] some outright price declines, relative to the record high prices we’re seeing right now," Zandi said.

"But it’s not like the stock market which could change in an instant," he continued. "The housing market takes time to kind of work through all of this. It’s not going to be next month or the next six months, it’s probably the next year to three or four to see all of this unfold." 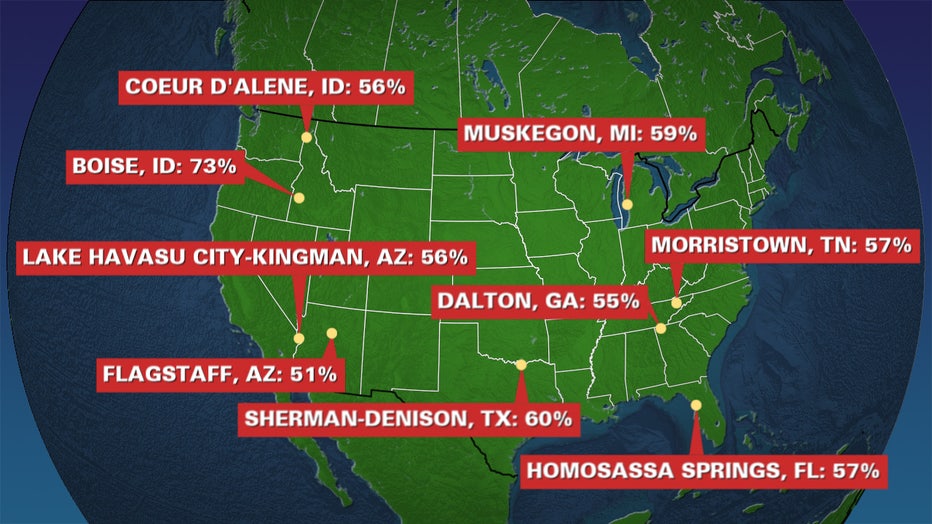 The top 10 most overvalued housing markets in the U.S., according to Moody’s. Not shown: Kahului-Wailuku-Lahaina, Hawaii: 55%.

In Boise, Idaho, the most overpriced market in the nation, homes are 73% overvalued, according to Moody’s analysis.

Idaho has four cities ranked in the top 15 overvalued markets on Moody’s list. Homes in Coeur d’Alene are 56% overpriced, while home prices in Pocatello and Idaho Falls are 49% and 49% overpriced, respectively.

Zandi said a number of factors have played key roles in causing house prices to skyrocket in Boise and other parts of the state.

First, the Federal Reserve slashed interest rates during the pandemic in an effort to help the U.S. economy, which "juiced-up housing demand because it just looked really quite affordable," Zandi noted. But on top of that, there had already been a limited supply of housing — a vestige of the financial crisis over a decade ago.

"That wiped out the homebuilding industry and it’s taken a long time to get the home building industry back up and running and building homes, so we have this enormous demand, combined with this shortage of homes. And this has caused prices to go northward," Zandi said.

Another factor in cities like Boise was the implementation of remote work during the pandemic. With more flexibility at work, many Americans left larger cities like San Francisco or Seattle for communities with comparatively cheaper housing prices. 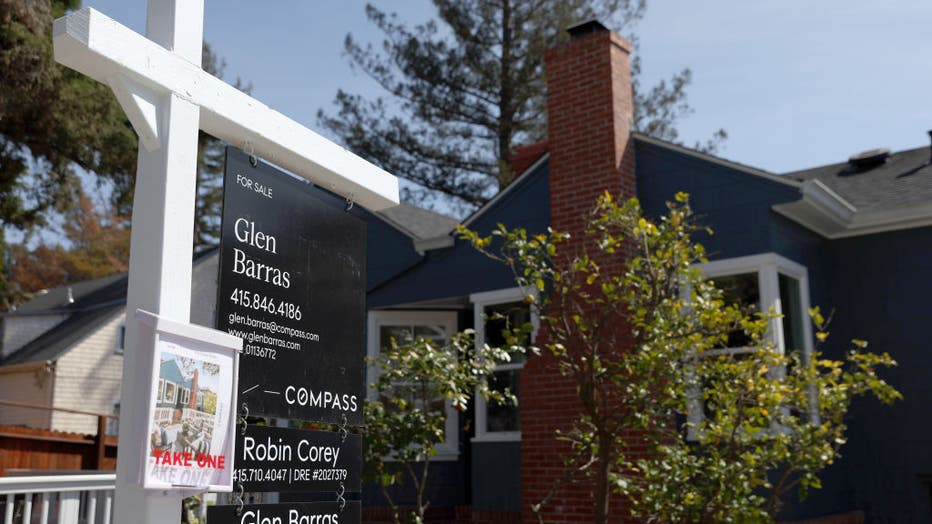 FILE IMAGE - A for sale sign is posted in front of a home for sale on March 18, 2022, in San Rafael, California. (Photo by Justin Sullivan/Getty Images)

In the first year of the pandemic, Idaho was among the top five states that saw the most inbound moves, according to FOX Business.

"So both of those dynamics have played a key role in causing house prices to go skyward in Boise. Of course... interest rates are up and remote work is starting to unwind, so those supports to house prices are starting to fade away," Zandi noted.

In Tennessee, where four cities made the top 20 list of overpriced markets, homebuyers in Morristown, a city with a population of just under 30,000, are paying 57% over value for homes.

The pandemic also sparked a boom in second-home buying. Many affluent Americans, amid remote work and record-low mortgage rates, began buying more vacation homes — reaching a peak of 88% above pre-pandemic levels in March 2021, according to a recent report from Redfin, a real estate brokerage.

Many of the overvalued areas today — particularly in smaller markets on Moody’s list — are also a result of the demand for second-home buying, Zandi said.

"Also during the pandemic, the number of retirees increased quite dramatically. So retirees looking for a place to go, these are pretty attractive places as retiree destinations and that also added to the demand," he explained.

Will these overvalued housing markets cool off?

"If you’re a homeowner, and you’re watching the value of your house go up... it feels pretty good," Zandi said. "But if you’re a first-time homebuyer, this is a real problem, because you know — you have to pay a lot more for it."

For many Americans looking to buy a home, that thought can be frustrating.

Zandi predicted that prices nationwide are likely to go flat, at least for the next two to three years as incomes and rents catch up and valuations normalize over time.

"Some markets probably will see some price declines, particularly the most active markets like Boise, the poster child, or the top of the list of overvalued markets," Zandi said.

While some people may need to buy a home sooner than later, Zandi recommended that buyers wait a bit if possible and potentially find a better window — noting how mortgage rates "go up, go down, they go all around."

"If you’re not in a big rush for whatever reason, it probably behooves you to be patient here," he said.

Top 25 most overvalued markets in the U.S., according to Moody’s:

This story was reported from Seattle and Cincinnati.