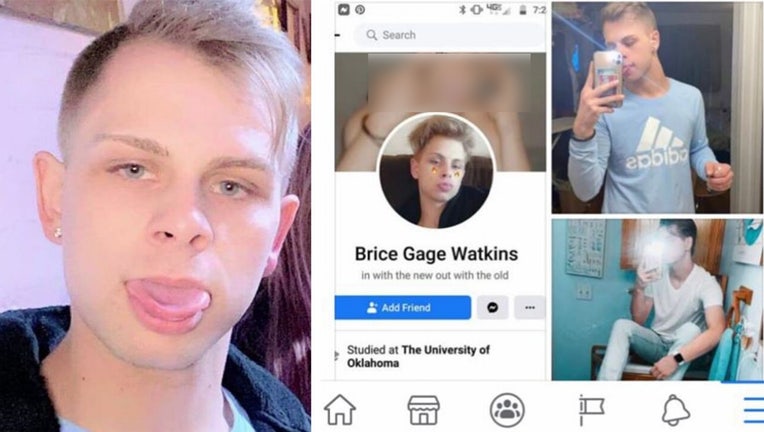 Brice Gage Watkins may have been in the Oklahoma City area as of Tuesday afternoon, and he has ties to Norman and Enid, authorities said. (Oklahoma City Police Department)

OKLAHOMA CITY - The U.S. Marshals Service has arrested a 22-year-old Oklahoma man accused of sexually assaulting a 6-month-old, recording the encounter and sharing it on social media.

Brice Gage Watkins was taken into custody by marshals, who got involved after several weeks of Watkins remaining on the run.

He faces a handful of felony charges for allegedly committing lewd acts to a child, manufacturing child pornography and distributing it to at least two women.

One of the women turned the video over to police on Aug. 11, telling investigators she recognized the child in the video and believed it was filmed in the victim’s home, Enid News reported. She was a friend of the child’s mother.

The second woman told police she received the video along with a message reading “whose child is this,” according to the outlet.

Both women reportedly told investigators that they believed Watkins was the man seen molesting the child in the video.

Enid police said in mid-August that they believed their counterparts in Norman had taken Watkins into custody but subsequently said that suspect turned out to be someone else.

“Help us lock him up,” Enid police wrote in a Facebook post urging anyone with information on his whereabouts to come forward.

In addition to its work helping state and local authorities track down fugitive sex offenders, the Marshals Service has also recently taken part in several high-profile operations to recover missing and at-risk children, some of whom were victimized by sex traffickers.

They recovered more than two dozen children in the first three weeks of an ongoing operation in Ohio last week, and they located 39 missing children in Georgia last month.