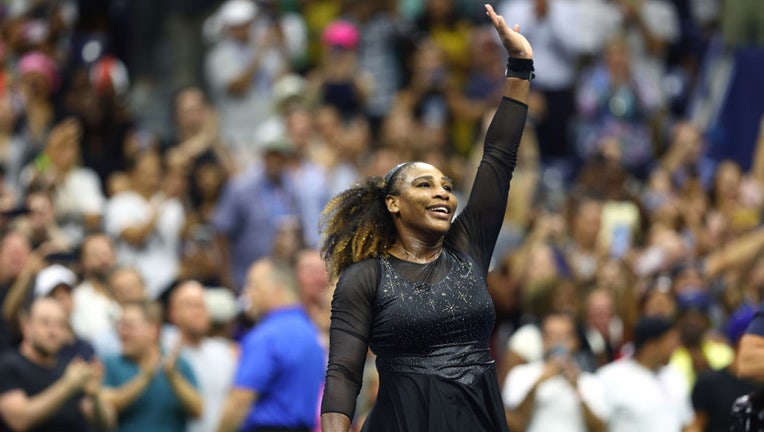 Serena Williams of the United States celebrates after defeating Danka Kovinic of Montenegro during the Women's Singles First Round on Day One of the 2022 US Open at USTA Billie Jean King National Tennis Center on August 29, 2022 in the Flushing neigh (Elsa/Getty Images)

Serena Williams is not ready to say goodbye just yet. Nor, clearly, are her fans.

In her first match at what is expected to be the last U.S. Open — and last tournament — of her remarkable playing career, Williams overcame a shaky start to overwhelm Danka Kovinic 6-3, 6-3 on Monday night in a packed Arthur Ashe Stadium with an atmosphere more akin to a festival than a farewell.

Early, Williams was not at her best. There were double-faults. Other missed strokes, missed opportunities. She went up 2-0, but then quickly trailed 3-2. Then, suddenly, Williams, less than a month from turning 41, looked a lot more like someone with six championships at Flushing Meadows and 23 Grand Slam titles in all — numbers never exceeded by anyone in the professional era of tennis, which began in 1968.

She rolled through the end of that opening set, capping it with a service winner she reacted to with clenched fists and her trademark cry of "Come on!" The more than 23,000 in attendance rose for a raucous standing ovation — and did so again when the 1-hour, 40-minute contest was over, celebrating as if another trophy had been earned. 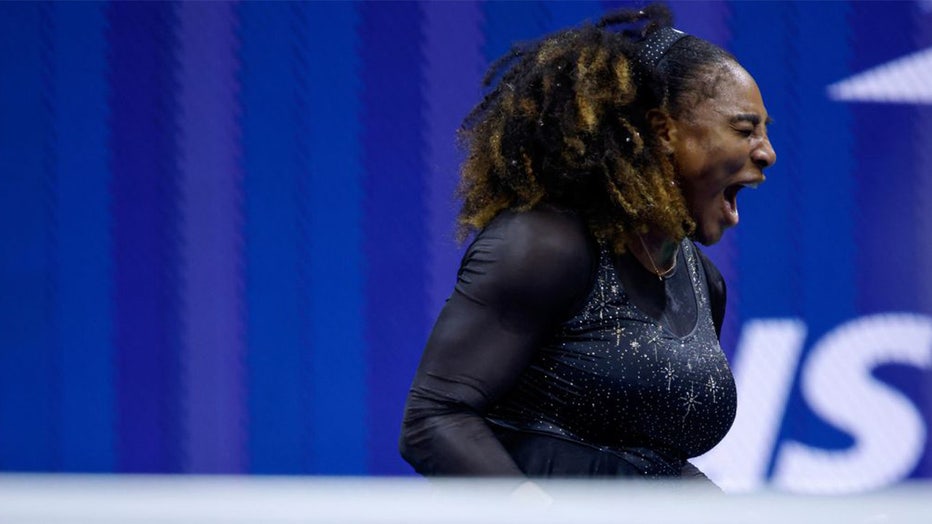 US player Serena Williams reacts after a point against Montenegro's Danka Kovinic during their 2022 US Open Tennis tournament women's singles first round match at the USTA Billie Jean King National Tennis Center in New York, on August 29, 2022.  (KENA BETANCUR/AFP via Getty Images)

Williams will continue to play now, facing No. 2 seed Anett Kontveit of Estonia on Wednesday.

And, there seems no doubt, they will come again to the U.S. Open from far and wide for Serena — no last name required, befitting someone as much an icon as superstar athlete — eager to see her play or, if not lucky enough to hold the right ticket, hoping for an autograph, a glance at her practicing or merely the chance to breathe the same Flushing Meadows air as her.

As thousands waited in lines to enter the tournament grounds hours before her match, then headed to smaller courts for earlier action or simply milled around, waiting and wading in the palpable excitement, no one present could know for sure how many more opportunities there will be for any of it. Folks were there to watch, or just think about watching, Williams swing her racket.

And they were there to honor her and show appreciation for what she’s done on the court and off.

At about 6:15 p.m., Williams made the short walk to the practice courts beside Arthur Ashe Stadium for a half-hour hitting session to warm up. Folks packing the bleachers above the practice area greeted her with shrieks of "Serenaaaaa!" on her way in, and again yelled on her way out, receiving a wave of her racket as acknowledgment before Williams strode, lips pursed, back into the stadium. 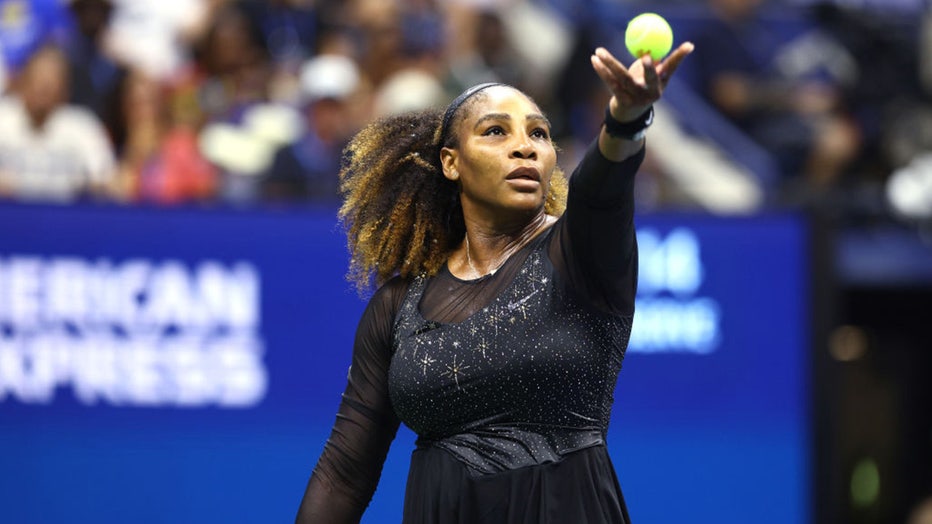 Serena Williams of the United States serves against Danka Kovinic of Montenegro during the Women's Singles First Round on Day One of the 2022 US Open. (Elsa/Getty Images)

About 45 minutes after that, the match began and it was as clear as ever that she means a lot to a lot of people. As a tennis player. As a woman. As an African American. As a mother. As a businesswoman.

"When she started out, female athletes weren’t getting recognized. She’s done so much," said Quintella Thorn, a 68-year-old from Columbus, Georgia, making her eighth trip to the U.S. Open. "And now, she’s ..."

"Evolving," chimed in Thorn’s friend, Cora Monroe, 72, of Shreveport, Louisiana, which she noted is where Richard Williams — the father of Serena and sister Venus, and the central figure in the Oscar-winning film "King Richard" — is from, too.

That word, "evolving," is the one Williams said she preferred to the more commonly used "retirement" when she wrote in an essay for Vogue released about three weeks ago that she was ready to concentrate on having a second child (her daughter, Olympia, turns 5 on Thursday) and her venture capital firm. 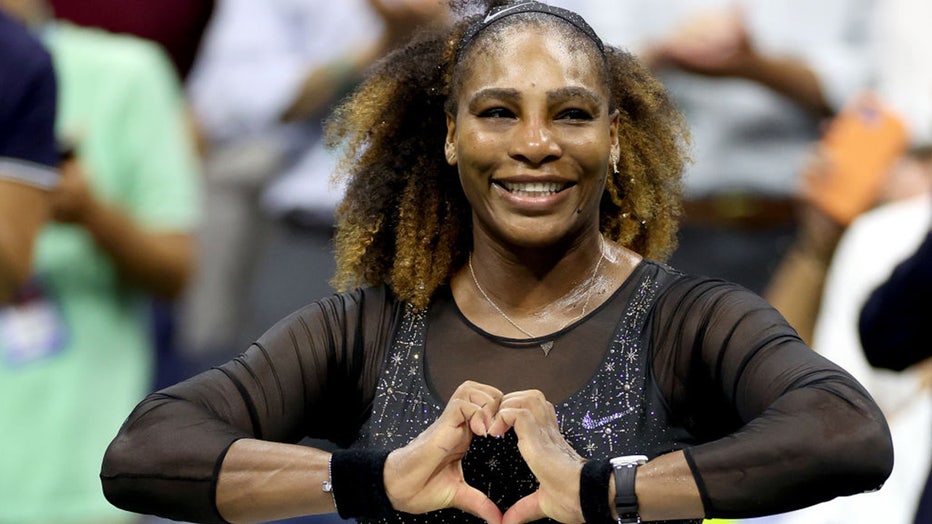 Serena Williams of the United States celebrates after defeating Danka Kovinic of Montenegro during the Women's Singles First Round on Day One of the 2022 US Open. (Al Bello/Getty Images)

Olympia wore white beads in her hair on Monday, a nod to her mom's hairstyle when she won her first U.S. Open in 1999 at age 17. 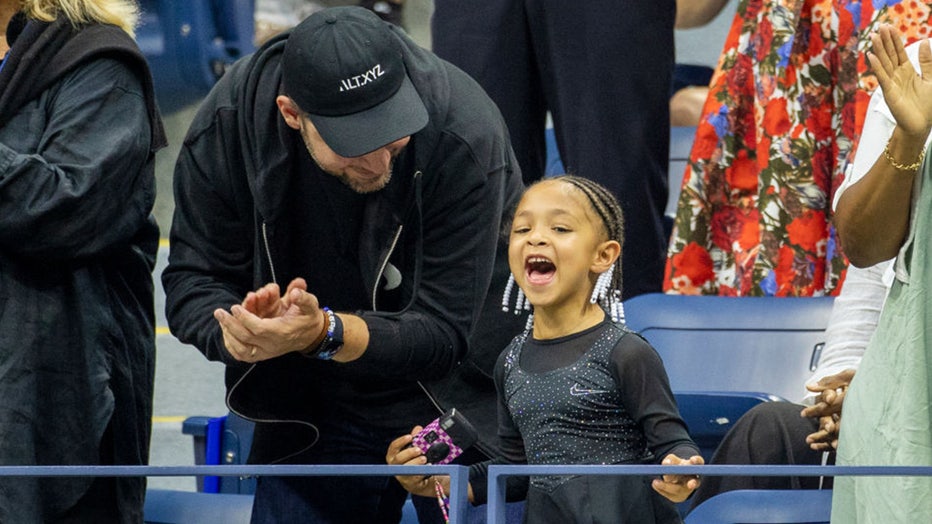 While Williams did not exactly declare that the U.S. Open definitively would be her last tournament — she also is entered in doubles with Venus, who is 42 and a seven-time major singles champ herself — she has made it sound as if it will be.

"Once Serena announced she would play the U.S. Open, we sold out in a nanosecond for Monday night and Tuesday night. You can see on the secondary market, the get-in price is $230. I saw $5,800 for a courtside seat this evening. Look, this is a historic moment for the Williams family, for Serena and our sport," said Stacey Allaster, the tournament director of the American Grand Slam event. "It is so difficult to really capture what Serena and Venus have done for the sport of tennis. They have transformed our sport. They’ve made us more inclusive. And they’ve transcended sports."

Which is why Monday mattered more than the usual Day 1 at a major tournament. And why the daily program did not make mention of any other of the dozens of athletes in action, showing instead a montage of six images of Williams holding her six U.S. Open trophies above the title: "Serena Williams, A Legacy of Greatness." And why there was a sense of less importance for matches involving other elite players such as past U.S. Open champions Bianca Andreescu, Andy Murray, Daniil Medvedev and Dominic Thiem, or French Open finalist Coco Gauff, an 18-year-old American.

Kriti Kamath, a 9-year-old from Boston, toted an oversized yellow tennis ball in hopes of gathering some signatures — perhaps even after Williams’ planned pre-match hitting session in the evening, before her contest — as she walked outside Ashe with her mother, Neethor Shenoy.

Shenoy has told her daughter, who plays tennis, about Williams’ significance.

Mom said she’s been traveling from Boston to New York for the U.S. Open since 2004; this was Kriti’s first day of competition, but they were on site earlier in the week for "Fan Week." The U.S. Tennis Association said more than 90,000 free online passes were downloaded for that run-up to the main-draw action, an increase of more than 35% from the last pre-pandemic tournament in 2019.

The USTA said it sold more than 16,500 tickets for the tournament on the day Williams revealed her intentions, more than in the previous seven days combined. That included more than 4,600 for Monday night alone, making it a sellout.

Monroe and Thorn said they have tickets for both the daytime and nighttime sessions, which are sold separately, for each of the tournament’s initial three days.

On Monday, both were wearing blue T-shirts: Monroe’s was emblazoned with "Serena" four times in different shades of purple; Thorn’s carried a black-and-white photo of Williams beside the words "Greatest Female Athlete" — with "Female" crossed out.

Monroe said she admires the Williams sisters "just for how they have carried themselves; they are an inspiration," and that she and Thorn couldn’t wait to be in the stadium for Williams vs. Kovinic.

"Serena’s going to win tonight," Monroe said. "So we’ll see her Wednesday when she plays again."