What you need to know about the COVID-19 mu variant

The World Health Organization has identified the COVID-19 mu strain as a "variant of interest."

WASHINGTON - More than 40 million COVID-19 cases have been reported in the United States since the start of the global pandemic, as the nation faces a concerning resurgence of new infections fueled by the delta variant and a barrage of misinformation.

The figure from Johns Hopkins University represents the total number of reported positive infections, though health officials believe the actual number is far higher. The U.S. COVID-19 death toll has also climbed to over 646,000 Americans, while more than 4.5 million virus-related deaths have been reported worldwide.

The country is facing a new challenge as the highly contagious delta variant continues to spread and millions of Americans remain resistant to getting a COVID-19. After declining in the spring, cases and hospitalizations began to rapidly increase this summer — largely among the unvaccinated — and the country is now seeing figures not seen since January.

Over Labor Day weekend, the U.S. saw nearly four times as many COVID-19 cases compared to the same time period in 2020, according to Oxford University.

On Sept. 5, 2020, the country’s weekly average number of new daily COVID-19 cases was 41,488, data shows. A year later that number rose to 163,728 — nearly four times the amount. Deaths were also nearly twice as high compared to a year ago, according to the same chart.

Nationwide, at least 53% of the total U.S. population is fully vaccinated to date, the U.S. Centers for Disease Control and Prevention reports. The fully vaccinated figure jumps to 62% among those 12 and up who are currently eligible to receive the shot.

But in some states, like Mississippi, just 40% of its 3 million people are fully vaccinated. The low vaccination rate has driven a surge in cases and hospitalizations that is overwhelming medical workers.

Physicians at the University of Mississippi Medical Center, the only level one trauma center in all of Mississippi, are caring for the sickest patients in the state. The emergency room and intensive care unit are beyond capacity, almost all with COVID patients.

Dr. Risa Moriarity, executive vice chair of the emergency department, said the hospital has been forced to put beds in hallways, patients are being treated in triage rooms, and paramedics are delayed in responding to new calls because they have to wait with patients who need care. 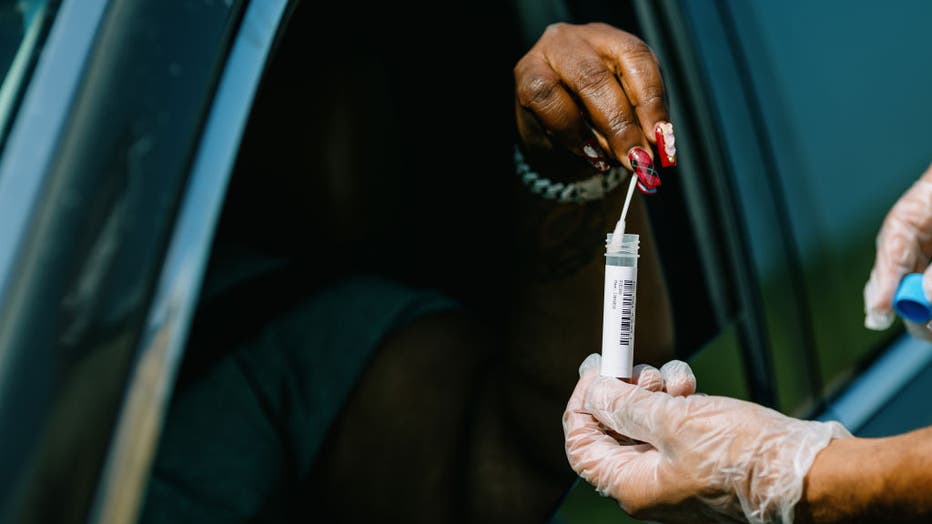 FILE - A member of the National Guard collects a COVID-19 swab test from a driver at the University of New Orleans Lakefront Arena drive-thru facility in New Orleans, Louisiana, on Aug. 24, 2021. (Photographer: Bryan Tarnowski/Bloomberg via Getty Ima

The CDC says the current vaccines remain highly effective at preventing severe disease and death, including against the delta strain. But the agency in late July recommended fully vaccinated people once again wear masks indoors, citing new data showing the delta variant is more infectious and can lead to increased transmissibility when compared with other variants, even in some vaccinated individuals.

In addition to the now-dominant delta variant, experts say breakthrough infections may also be a combination of waning immunity from those who were vaccinated eight months ago and fewer community mitigation measures to stop the spread.

U.S. health officials have also announced plans to administer COVID-19 booster shots to all Americans to shore up their protection, pending U.S. Food and Drug Administration and CDC approval.