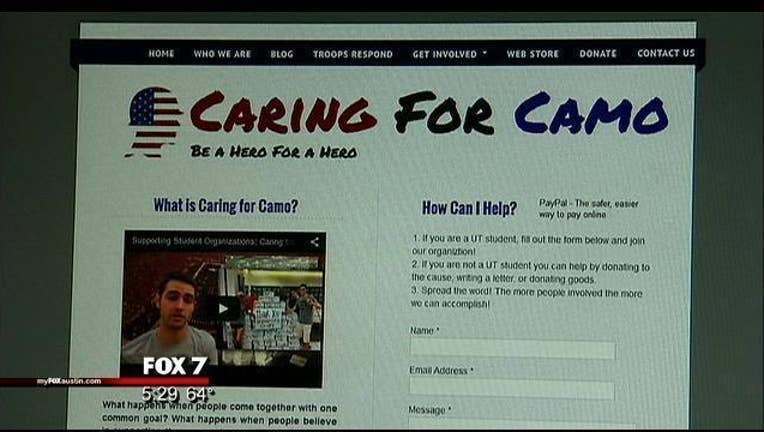 AUSTIN, Texas - A unique group founded by local college students is doing what they can to send a part of home to American troops deployed overseas.

Often times when the FOX 7 Care Force profiles veterans service groups they usually have some connection to the military be it through family or they are also veterans.

But that's not the case for an organization called "Caring for Camo".

It was founded by college students who didn't serve in the military, but make no mistake to deployed troops they are of service.

They've got a website, they've got shirts, but what these UT students really have is heart and respect for troops on deployment.

Allen Dukor came with the idea of Caring for Camo.

"I wanted to show students care. There's a perception that little kids and old people care but I wanted to show that their peers, most in the military are 18 to 30, that group cares as well too," he said.

Caring for Camo sends care packages to the troops.

Within the last two years they've had about two packing parties each semester. 1,600 packages have been sent out to combat zones.

750 UT students, many without any direct connection to the military, volunteered to pitch in.

"The stereotype is "I just wanna get my grades, party, enjoy college." But there's plenty of people out there with plenty on their minds and when you present them with a way to help and get involved they jump on the opportunity."

"It's been the most rewarding experience of my college career hands down."

In the care packages they send the usual snacks and magazines, but it's the letters they include that really pack a punch, nothing profound just an acknowledgement of thanks and respect.

The idea to send letters came from UT football player Nate Boyer who served in Iraq as a green beret.

He told them letters from civilians meant a lot, in fact soldiers have written back.

"Some of them are pretty gut wrenching and emotional. It's a great feeling."

Soldiers have actually met up with students when they returned home.

Caring for Camo just had their last meeting of the semester. Their plan is to keep it going and even expand more packing parties at UT to come.

So far, Caring for Camo has raised about $70,000. They say all of it has gone into care packages.